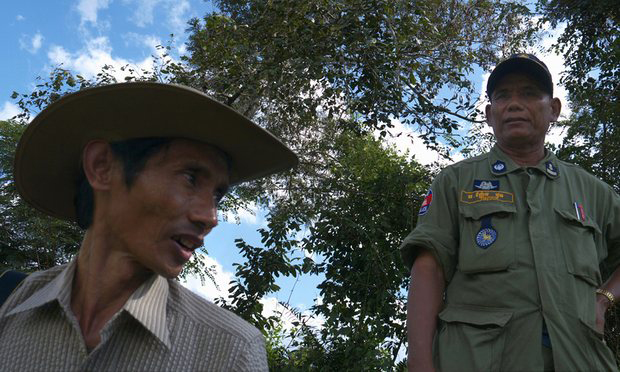 A still from the documentary “I Am Chut Wutty” – available on RFA’s English and Khmer websites to view.

WASHINGTON – Ahead of World Press Freedom Day, Radio Free Asia (RFA) will make available online a recently banned documentary film about the murder of a prominent Cambodian rainforest activist. The makers of “I Am Chut Wutty” have agreed to allow RFA to post the Cambodian language film on its RFA Khmer website in perpetuity starting Tuesday, April 26. RFA will also post an English subtitled version for a 24-hour period on April 26 starting at 12:01 a.m. (U.S. EST). Cambodia’s government last week refused to grant a license for a screening of the film in Phnom Penh, effectively issuing a ban on its public release.

“Chut Wutty’s life was cut short but his legacy of fighting to protect Cambodia’s rainforests lives on,” said Libby Liu, President of RFA. “Cambodian authorities’ decision to deny a public screening of this documentary about him and the ongoing struggle only reinforces its relevance.

“We are proud to make ‘I Am Chut Wutty’ available online to RFA’s audiences and hope this guarantees its largest possible viewing.”

Coming four years after the death of community activist Chut Wutty, who was slain in April 2012, the documentary focuses on the longstanding struggle to stop the practice of illegal logging in Cambodia. Wutty had led a group of activists determined to investigate and halt corrupt logging syndicates, which often have ties to the Cambodian military. The rate of deforestation in Cambodia is among the highest in the world, and the devastation to one of Southeast Asia’s last remaining wilderness is costly to native indigenous communities who rely on the rainforest’s health for their daily livelihoods. The film, directed and produced by Fran Lambrick, features exclusive footage with Wutty in the final months before his death at the hands of a military police officer.

RFA’s Khmer Service has closely covered Cambodia’s illegal logging trade, which reaps huge profits at the expense of the country’s natural resources. Though Cambodia’s government has repeatedly claimed to crack down on corrupt deforestation, overwhelming evidence persists of this widespread practice. Environmental defenders and communities have struggled to bring attention the rampant rate at which Cambodia’s rainforest is being cut down. The trade has also been tied closely to government corruption. RFA’s reports also reveal how land concessions have been used as a cover for illegal logging, often as a result of collusion between timber companies and government officials.