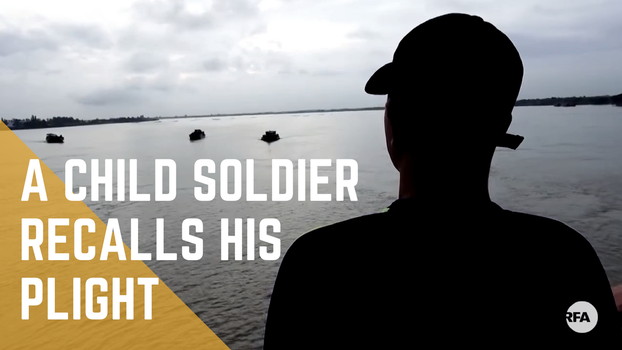 “Aung Ko Htway was robbed of his childhood,” said Libby Liu, President of RFA. “Now, after speaking with RFA, he is being severely punished once again.

“This award underscores not only his tragic past as a forcibly conscripted child soldier, but also Aung Ko Htway’s unconscionable current situation and the increasingly worrisome state of press freedom in Myanmar.

“Like Wa Lone and Kyaw Soe Oo, the reporters from Reuters who are being tried, this brave individual courageously shared a difficult story knowing that it needed to be told and is paying a terrible price for it.”

Myanmar’s armed forces and some of the country’s ethnic armed groups have long recruited and trafficked children to serve as soldiers, particularly in conflict-prone areas in the borderlands. Military recruiters often snatch children under the pretext that they have committed a minor or nonexistent offense and tell them they must serve in the army or go to jail. Children are forced to undergo training in often harsh or inhumane conditions and are routinely subjected to physical abuse by military personnel.

Radio Free Asia’s Burmese Service produced an in-depth and personal look into the experience of these child soldiers, telling the gut-wrenching story of Aung Ko Htway, who was abducted when he was 14, forced to serve in the Myanmar army, and sentenced to prison for a crime he didn’t commit. Twelve years after his ordeal began, he was sentenced on March 28 underSection 505(b) of the country’s Penal Code, pertaining to making, publishing, or circulating information that may cause public fear or alarm and incite people to commit offenses against the state or disturb public tranquility. Just this month, legal troubles for Aung Ko Htway have continued to mount, with additional charges being brought forward by authorities.

The award was presented during a ceremony in Las Vegas. Other winners announced at the 2018 New York Festivals included CNN, PBS, ABC, Al Jazeera, National Geographic, and RFA sister network, Voice of America.