A Year ‘Like No Other’: RFA President Decries ‘Unprecedented’ Crackdown on Independent Voices in Asia 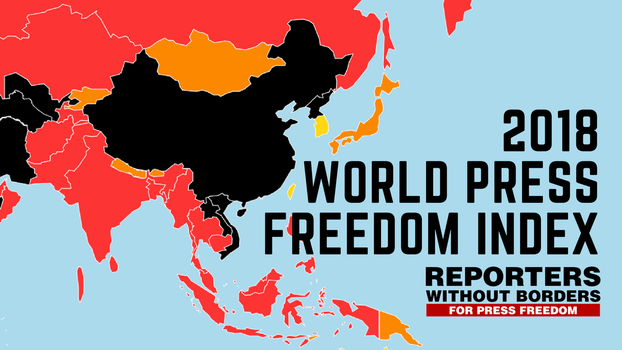 WASHINGTON – The media environment in Radio Free Asia’s broadcast region is showing dramatic decline, according to the Reporters Without Borders (RSF) 2018 Press Freedom Index. And this is particularly true in Cambodia and Burma – countries for which press freedom hopes have eroded over the past year. The report especially cites China’s model of media suppression, which has been exported to and duplicated by many countries under authoritarian rule in Asia.

“The past year up to now has been like no other for RFA,” RFA President Libby Liu said. “Authoritarian strongmen in Asia – who rule countries to which RFA broadcasts – have shown little, if any, restraint in targeting RFA journalists and sources, as well as their families and loved ones.

“More countries have adopted China’s censorship model, which has led to unprecedented efforts to attack and jail reporters and citizen journalists, and crush all forms of dissent.

“RSF is absolutely correct in noting the dramatic fall in Cambodia. There two former RFA reporters – Uon Chhin and Yeang Sothearin – have been jailed for almost six months on trumped-up charges that are clearly related to their past connection with our organization. And this is after the Cambodian government forced the closure of RFA’s bureau in Phnom Penh just after last year’s communal elections and before national polls this summer.

“Six of RFA’s Uyghur reporters still have family members missing or detained in re-education camps in China. Authorities have given no word of these individuals’ whereabouts, let alone their well-being or if they’re receiving the medical care they need.

RSF’s annual survey is especially critical of Cambodia, which fell 10 places in the Index to 142nd, one of the biggest falls in the region. The report cites Prime Minister Hun Sen’s “ruthless offensive against media freedom in 2017, shutting down more than 30 independent media outlets and jailing several journalists in a completely arbitrary manner.” RSF says the documented crackdown in Cambodia on “independent voices,” the government’s “increased dominance of the mass media,” and the “meticulous control of social media” are a “disturbing echo of the methods used in China,” which has invested heavily in Cambodia’s pro-government mouthpiece media.

China meanwhile is described in the report as becoming a “contemporary version of totalitarianism,” citing Xi Jinping’s steps to establish a “new world media order under its influence.” In Vietnam, people who blog about banned subjects can expect a 15-year jail term. Of the 180 countries ranked, RSF put North Korea dead last, China at 176; Vietnam, 175; and Laos, 170 – consistent with the 2017 index. Cambodia dropped 10 places to the 142nd spot and Myanmar to 137, dropping six places from last year’s index. The report also cited other worsening trends in Asia. China now has more than 100 bloggers and journalists detained as President Xi Jinping has stepped up efforts to retain complete control over internal news coverage.