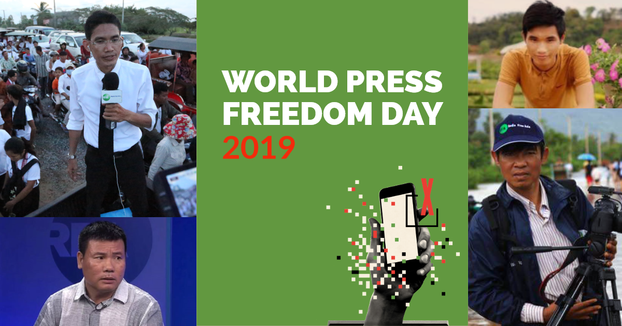 WASHINGTON–As journalists and news groups around the world mark World Press Freedom Day, Radio Free Asia’s President noted the serious challenges and threats the organization and its contributors face. Especially alarming have been the declining trends in all of RFA’s broadcast countries, in which authorities have jailed contributors, re-instated charges against former reporters, and even detained relatives of RFA journalists.

“Radio Free Asia’s brave reporters often endure unimaginable threats and intimidation so we can get the truth to our audiences,” said RFA President Libby Liu. “Regimes resort to every possible means to crush independent voices with impunity. The consequences have sadly been profound for RFA’s journalists.

“Among the dozens of bloggers and reporters imprisoned under Vietnam’s restrictive media laws are RFA videographer Nguyen Van Hoa, and more recently, blogger Truong Duy Nhat who resurfaced in a Vietnamese prison three months after disappearing from Bangkok where he was seeking asylum.

“China continues to hold dozens of relatives of six U.S.-based Uyghur journalists in retaliation for their work exposing the mass incarcerations in Xinjiang. In Cambodia, two former RFA reporters continue to face trumped-up charges for their past association with our organization, long after we were forced to leave the country.

“These harsh tactics are unacceptable and will not deter RFA from bringing free press to closed societies. World Press Freedom Day is an important time to remember the struggles journalists face every day to shed light on events and developments that affect us all. In an era of widespread authoritarian rule and disinformation, RFA’s mission proves as vital as ever.”

Reporters Without Borders (RSF)’s recent World Press Freedom Index emphasized the news “black hole” developing in China and Vietnam where authoritarian rulers continue to consolidate their power. The global survey specifically highlighted China’s efforts to export its censorship technology as one of the major threats to press freedom in the region as the country funnels funds and resources to authoritarian regimes. Disinformation is a growing concern in countries such as Myanmar where hate messages go unmoderated. North Korea ranked second to last, the first time it has moved from the bottom of RSF’s index in three years. Radio Free Asia recently joined global news organizations and publishers in the recently launched One Free Press Coalition, an effort to call attention to journalists under attack around the world.