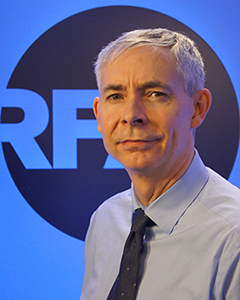 “Matthew brings a deep interest and expertise in Radio Free Asia’s region, having more than two decades of experience covering Asia for the Associated Press and other esteemed news services,” said Libby Liu, President of RFA. “His extensive background as a reporter, editor, and bureau chief make him a great addition to our team. With his leadership, I am confident RFA’s Southeast Asian services will continue to grow and thrive.”

“I’m very excited to work with RFA,” Pennington said. “I’ve always admired its ability to provide a vital source of independent news in countries where the free press is restricted. That mission is as important as ever in Southeast Asia.”

As Managing Director for Southeast Asia, Pennington will work closely with the directors of four language services to manage daily and long-term operations of RFA Vietnamese, Khmer, Lao, and Burmese. He will focus on enhancing the services’ operations to meet audience needs, while advancing RFA’s congressionally mandated mission of bringing objective, timely news and information to people living in closed countries under authoritarian rule in Asia. Pennington will report to RFA’s Vice President of Programming, Parameswaran Ponnudurai.

Pennington comes to RFA from the AP where he was most recently covering U.S. foreign policy in Asia, including North Korea and U.S.-China relations, and overseeing the AP’s national security coverage in Washington. His new role brings him back to his journalism roots. He first wrote for AP in 1995 as a stringer in Laos, before relocating to Bangkok, where he shifted from free-lancing to become a staff writer, first for Agence France-Presse and then the AP. He covered Thailand, Burma, Laos and Cambodia, but had other assignments across Asia. He covered the Asian financial crisis in Thailand, student protests and Aung San Suu Kyi’s house arrest in Burma, and the demise of the Khmer Rouge in Cambodia. In 2003, he was transferred to Islamabad, where he became bureau chief for Pakistan and Afghanistan. He led the team that won the Society of Professional Journalists award for breaking news for coverage of the assassination of former Pakistan Prime Minister Benazir Bhutto. Pennington, after returning to Bangkok, later went to the AP’s Washington, D.C. bureau in 2011, where he took every opportunity to cover human rights issues in Southeast Asia, including the plight of the Rohingya, the political crackdown in Cambodia and the clampdown on dissent in Vietnam and Laos.