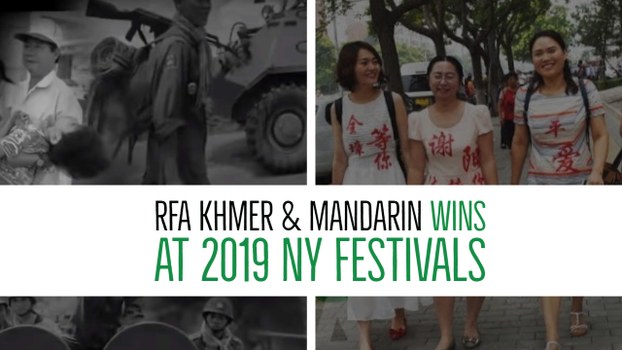 “These video documentaries re-examine key historical events in Cambodia and China,” said Libby Liu, RFA President. “They are reminders of the power authoritarian governments in Asia continue to exercise over press freedom and rule of law. For millions living in these countries, Radio Free Asia is a lifeline to the truth – connecting audiences with the facts through quality, in-depth journalism.

“We are so proud of our Khmer and Mandarin Services for earning this recognition for their excellent work.”

The Bronze award-winner “Impunity or Justice” (English version) follows Cambodia's Hun Sen as he launched a bloody coup against the sitting Prime Minister Prince Norodom Ranariddh in 1997. Hundreds were injured or killed, including forces loyal to the Prince. Now after more than two decades, some are still fighting to bring those responsible to justice.

In “Women against the State” RFA’s Mandarin Service highlights the lives of five women whose family members were arrested during China’s countrywide “709” crackdown. Their family members, in addition to more than 300 lawyers were targeted for their attempts to defend human rights in China. Over the past three years, authorities have continued to harass and intimidate these women through threatening their family member’s safety and well-being. This special report follows these women and their quest for justice for their family members.

Other noteworthy winners at the NY Festivals this year include CNN, ESPN, VICE News, and RFA-sister network VOA.