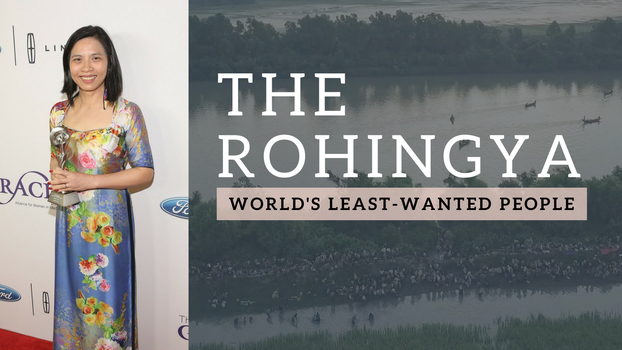 The Alliance for Women in Media

WASHINGTON – Radio Free Asia (RFA) last night was named a winner at the 2018 Gracie Awards for its in-depth webpage “The Rohingya: World’s Least-Wanted People.” The page’s designer Minh-Ha Le, accepted the Gracie award for best website in the category for interactive news media. The Gracies are sponsored by the Alliance for Women in Media which recognizes excellence for women creators in the media and entertainment industry.

“This web feature tells a difficult, complex, and fast-evolving story that needs to be told,” said Bay Fang, the executive editor of the project. “While the world watches, close to a million people, scarred by unspeakable horrors, have fled their homes to begin a life of uncertainty.”

“In Myanmar, the tragedy continues with officials turning a blind eye to this man-made catastrophe that is deliberately misrepresented in Burmese media.”

The project explores the long persecution of the Rohingya Muslim minority in Myanmar through graphics, videos, key quotes, and current news. More than 600,000 Rohingya Muslims, including about 20,000 pregnant women, fled Myanmar’s Rakhine state last August in the wake of a military counter-offensive. The exodus put a huge strain on impoverished Bangladesh, which is struggling to provide housing and health care for Rohingya, many of whom escaped with little more than the clothes on their back. The government of Myanmar does not recognize Rohingya Muslims as citizens and refers to them as illegal immigrants from Bangladesh. Myanmar security forces have been blamed for killings, rapes and arson against the Rohingya community, in what the U.N. has described as “textbook ethnic cleansing” of the persecuted Muslim minority.

Other winners at the Gracie Awards this year include NPR, CNN, ABC News, and VICE News, among others.