Vietnamese Activists Cry Slander at Documentary Accusing them of Incitement 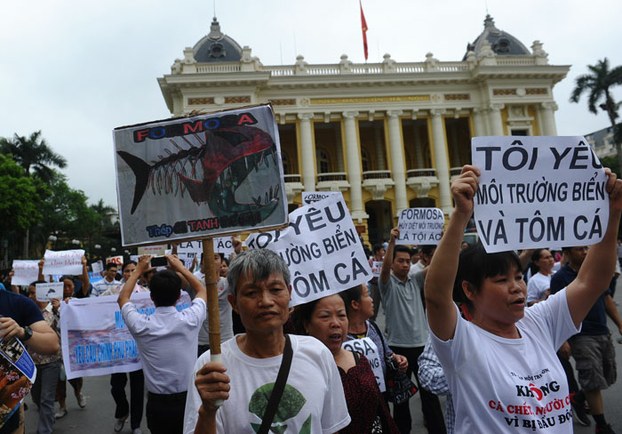 Protesters in downtown Hanoi demonstrate against Taiwanese conglomerate Formosa which operates a steel plant which they claim is causing mass fish kills due to pollution in Vietnam's central coast, April 1, 2016.

Vietnamese activists accused of spreading disinformation or incitement in a documentary produced by the country’s state-run media are saying the accusations are slanderous.

In “Opposite: The reverse side of social media,” Vietnam Television (VTV) says that activists have used social networks to provoke protests and misrepresent or falsify information to advance the agenda of “Abolishing the leadership of the Communist Party and overthrowing the People’s Government.”

Broadcast first on VTV1 at 8:10 pm on July 30, the program, hosted by Do Duc Hoang, has been trending over the past week. Even though the program blurred the faces of the “dissidents” it was accusing, local sources say it was not difficult to recognize who they were.

“I challenge any Party organization, radio stations or VTV station to point out any incorrect facts from my articles or interviews, or to show where there is any misrepresentation or agitation,” said independent journalist Pham Chi Dung, one of the accused, in a statement issued shortly after Opposite was broadcast.

The documentary interviewed government officials and two common people in a one-sided discussion according to RFA’s Vietnamese Service.

In the documentary one activist appears holding a sign that VTV censored. The voiceover says, “These messages of excitement, distortion, and falsification of the truth on social networks have made many people believe [these lies] and caused them to engage in disruptive and illegal acts.”

The woman in the photograph is Thuy Hanh, an activist from Hanoi. She told RFA that it was very cowardly for VTV to censor her protest sign.

“First of all, I found out how chicken they are. They show very clearly a picture of me but they blur out my sign for having a message against China?” she said.

“They deliberately distorted the truth just to smear us!” she said, adding, “They are lying, so they’re not worth it.”

The documentary also censored the face of Father Nguyen Dinh Thuc, who had organized protests by church congregations against the Formosa Plastics group, responsible for a 2016 toxic waste spill that devastated more than a hundred miles of Vietnam’s coastline.

The priest told RFA that the way the documentary used his censored likeness was slanderous.

“Slander and fabrication is their profession. The nature of communism is a lie,” he said.

“For many years now they have slandered not only me, but all those who fight for our rights, for the truth,” he said.

On the documentary’s accusation of attempting to overthrow the government, both Nguyen and Thuy denied they were in any position to pose a threat.

“They know well that we were allowed to protest at that time, so this is slander. Are they afraid of us?” asked Thuy Hanh.

Father Nguyen admitted that although he doesn’t like the current communist regime, his protests and petitions against Formosa Plastics were not in any way directed at the government itself.

The documentary also criticized of influential Facebook users, saying they “continually write to exaggerate the limitations and shortcomings of the leadership, and try to show conflicts of interest where none exist.”

The documentary specifically targeted the Facebook pages of Pham and other independent journalists.

Pham said he would not rule out taking VTV to court over their claims.

“This isn’t the first time VTV has mentioned me. In the past they accused me of distorting facts, incitement, and speaking ill [of the government],” he said.

“But they can’t say anything when it comes to the details,” he said.

”If they once again can’t prove anything, then that’s slander, so I have the right to sue them,” said Pham.

“I know that it will be very difficult to win in a court in Vietnam, but I may be able to sue them in court later, not right now,” he said.

Le Trung Khoa, the editor of the Thoi Bao newspaper, explained why Vietnamese media is so one-sided.

“In Vietnam, domestic media consists of more than 800 newspapers and TV stations under the management and supervision of the Communist Party of Vietnam. That’s why they only report the news in a way that supports the Communist Party, not the people,” he said.

Thoi Bao landed in hot water after reporting on the 2017 kidnapping of ex-oil executive Trinh Xuan Thanh as he sought asylum in Germany. Trinh ended up jailed for life in Vietnam on corruption charges.

“Since [that report] we’ve made a point to verify our sources, especially if we’re reporting on political, social, and cultural issues,” said Le, adding, “People can verify the sources on the internet.”

“The information we give is very different from what other outlets give to the people in this country, and we include topics about overseas Vietnamese. That may be the reason we were accused of spreading false information. But it’s a fact that our info is original and verified,” he said.

Le said that VTV1’s documentary may have actually had an effect opposite of what was intended.

“By using VTV1, Vietnam’s largest media agency, to smear us, they are [inadvertently] promoting us to the Vietnamese people,” he said.

RFA attempted to contact Do Duc Hoang, the host of the documentary who also wrote its script, but calls to his phone number went unanswered.

Reported and translated by RFA’s Vietnamese Service. Written in English by Eugene Whong.

Don't worry: RFA brings your verified-hard social media posts to the world as though these are facts from Vietnam.