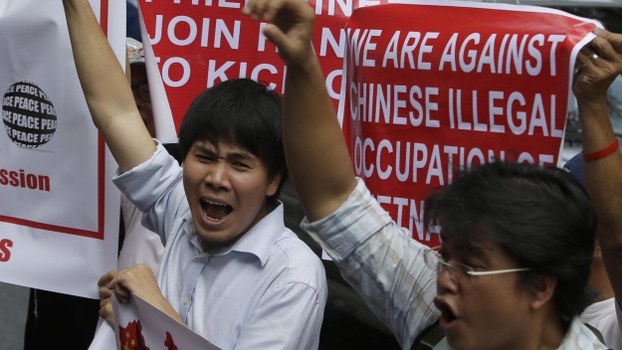 Vietnamese expatriates shout slogans as they join a rally by Filipinos in front of the Chinese Consulate at the financial district of Makati city to protest the recent moves by China to construct an oil rig near the Vietnamese-claimed Paracels off the contested Spratlys group of islands and shoals in the South China Sea Friday, May 16, 2014.

Amid renewed tensions with China in the South China Sea, Vietnam’s Foreign Ministry asserted the country’s claim to the disputed Vanguard Bank Thursday, saying there should be no dispute at all over the westernmost reef in the resource-rich Spratly Islands.

“Vietnam considers that all activities on the East Sea [the Vietnamese name for the South China Sea] must abide by the United Nations Convention on the Law of the Sea (UNCLOS), including respecting the sovereignty, sovereign rights and jurisdiction rights of coastal nations, as well as making practical contributions to the maintenance of peace and stability in the region,” she said.

The remarks came after several recent Chinese incursions into what Vietnam considers its own Exclusive Economic Zone (EEZ), including the deployment of a deep sea oil rig.

According to an article published in VN Express, the rig has been operational since September 21.

"Vietnam resolutely protects its sovereignty and legal rights on the East Sea through methods allowed by international law," the spokesperson added.

Vietnam has also affirmed that the Vanguard Bank belongs to Vietnam and there is no dispute over this ownership, she said.

Despite Hanoi’s assertion, China claims nearly all of the South China Sea and has built extensive fortifications on many islands. The Philippines, Taiwan, Brunei, Malaysia, and Vietnam also have overlapping territorial claims to features and waters in the sea, which is vital to international shipping and trade.

China is the strongest military and economic power in the region and the territorial dispute leaves Vietnam in a precarious position, as its economy depends on cooperation with China, but Vietnamese leaders face pressure to defend the country’s sovereignty.

The Vietnam Communist Party (VCP) Central Committee will convene its eleventh plenum from October 7-13 where defending the EEZ will likely be a priority on the agenda.

Hanoi can “continue to muddle through by ‘cooperating and struggling’ with China, back down in order to relieve unrelenting Chinese pressure, or counter-balance Chinese pressure by stepping up security and defense cooperation with the United States,” Thayer wrote in an RFA column published on Wednesday.

Another option would be for Vietnam to sue China in international court, and according to Pham Ngoc Minh Trang, a lecturer at Vietnam National University, Hanoi has a clear case.

“Vietnam can satisfy all the legal conditions, and it implements the provisions of UNCLOS, while China is the violator. Vietnam can totally win,” she said, in an interview with RFA’s Vietnamese Service.

But even if the case is winnable, Vietnam must also weigh the risks and benefits of suing.

“We have to look at the social impact of a potential lawsuit, at how imports and exports with China would be affected,” said Pham, who is now a Fulbright visiting scholar at New York University Law School.

“There are some small and medium businesses that deal with China, so if Vietnam sues China, how will they be affected?” Pham added.

She also said suing China in a free court like the International Court of Justice would require agreement from China to respect the ruling. The alternative would be to sue in the Permanent court of Arbitration, which could result in a case drawn out over several years that could be too costly for Vietnam.

“I completely believe that we can win, but on the other hand, we have to calculate carefully and carefully prepare,” Pham said.

In 2016, the Philippines prevailed over China in a case at the Hague-based Permanent Court of Arbitration, which rejected nearly all of Beijing’s claims. China refused to recognize the court’s jurisdiction and the new government that took office in Manila moved to appease China by courting more investments from Asia’s biggest economy.

Wow, what a mess!
This is exactly our ancestors had fought hard for freedom.
We don't betray our country and eat from their table scraps.
We don't bow down and rely on them so much that we lost our identity.
VNmese communists have betrayed her people. They are in bed with ruthless thieves and so blind that they don't even build up forces to protect VN. How can they not know that this day will come?
It's easier for VNmese to turn their backs on VCP and let you goons wallow in the cesspool!
But, we aren't going to do that for we love VN and we are patriots.
Succumb to your stupidity and arrogance, seek help from the VNmese people - you'll experience power beyond your imagination!
It isn't too late.
If not, leave the country with your hoarded wealth and let the people help themselves. We certain don't need your kinds and we will and can do better.

In case Vietnam to sue China she should call the court's attention to China's ratification of the UNCLOS, which means China has agreed to the delimitation of seas. That is, China has agreed that Vietnam has her own EEZ.