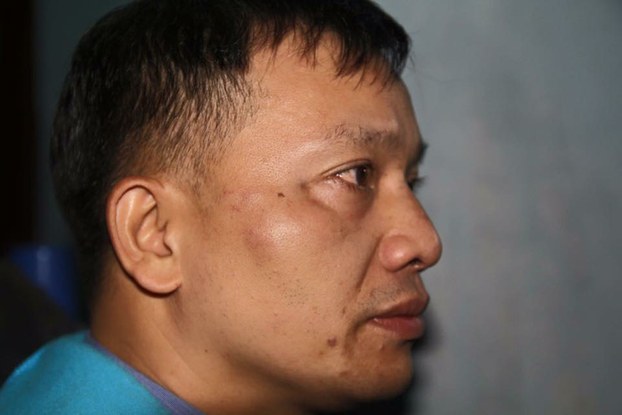 Nguyen Van Dai displays his face after he was beaten by masked assailants in Nghe An province, Dec. 6, 2015.

Dai’s lawyer Ha Huy Son posted the government document extending his prison time on Facebook, but told RFA he has little information beyond that.

“I rely on the Supreme Prosecutorate. Whenever they give me the permit I will be able to meet Dai,” he said. “They are following the Bill on Legal Prosecution of Vietnam.”

Dai, 46, was taken into custody last December after leaving his Hanoi home to meet with European Union representatives who were researching human rights issues in the country.

Plainclothes officers stopped Dai before he got to the meeting and took him back to his home, where a police camera faces the front door and authorities monitor everyone who comes and goes. They confiscated three computers and USB sticks and later charged Dai with "conducting propaganda against the state” under Vietnam’s Article 88.

The arrest came soon after masked assailants beat him and other activists in what he said at the time was a reprisal for his work educating the Vietnamese people on human rights.

In an interview Dai told RFA that “more than 10 people wearing masks and holding wooden clubs” stopped the taxi in which he and three other activists were riding.

“They took the four of us out, and also the driver, and began to beat us all. They hit me in the shoulders and thighs, and then dragged me into their car. They continued beating others, but I don’t know what happened to them after that,” he said.

“Inside the car, one guy told me that he would break my left arm but when he was about to do so he saw my ring with the [Catholic] cross and stopped. Another guy held my head in one arm and hit me in the face with his other fist. They continued hitting my face all the way to [nearby] Cua Lo [township].”

His captors took his cell phone, wallet and even several items of clothing, before forcing him out onto a beach and leaving him behind on a beach, he said.

In 2008 Nguyen was sentenced to five years in prison under Article 88. In 2011, he was released to house arrest for an additional four years and barred from practicing law.

Nguyen is the founder of the Committee for Human Rights in Vietnam, which trains human rights attorneys and promotes legal education. He has traveled across the country teaching young people how to report human rights violations and handle police interrogations.

In 2013, he launched the Brotherhood for Democracy with former jailed dissidents to coordinate human rights activities across Vietnam and to host forums in Hanoi and Saigon to mark International Human Rights Day.

In an April interview with RFA, Dai’s wife Vu Minh Khanh said her husband was being kept in isolation and was prevented from meeting with his family or his attorneys.

Reported and translated by RFA's Vietnamese Service. Written in English by Brooks Boliek.

What a patriot! Keep up with the good fight and your efforts will be known among our people. VN needs more compassionate people like this to speak up for human rights, justice, and freedom. I hope not all activists and demonstrators will paint a cross on their faces just to avoid a beaten! However, I think this will striker more fear in these communist thugs - a Christian gang!