Interview: ‘We Are Worried About The Degenerated Situation For Human Rights in The Area’ 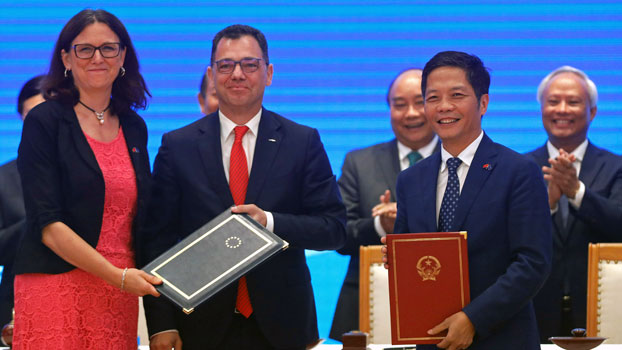 On Sunday, the European Union and Vietnam signed a landmark free trade agreement (FTA) that will eventually phase out almost all tariffs on goods that flow between the trading bloc and the Southeast Asian nation, after it the deal is ratified by lawmakers on both sides. In a statement, European Union Trade Commissioner Cecilia Malmström and Vietnam’s Minister of Industry and Trade Tran Tuan Anh, who both inked the agreement, hailed it as “the most ambitious free trade deal between the EU and an emerging economy to date.” Despite the signing of the FTA, Europe remains concerned about Vietnam’s dismal human rights record.

The deal comes as the EU is monitoring Vietnam’s neighbor, Cambodia, to determine whether that country’s exports should continue to enjoy tax-free entry into the European market under the Everything But Arms (EBA) scheme. Europe has been keeping a watchful eye on the authoritarian state’s crackdown on the political opposition, civil society, and the press. The bloc has also expressed deep concern about grave human rights violations in Myanmar. In a recent interview with RFA’s Roseanne Gerin at European Commission headquarters in Brussels prior to the signing of the EU-Vietnam FTA, Malmström discussed the intersection between trade and human rights issues in Vietnam, Cambodia, and Myanmar. The Q&A has been edited for length and clarity.

RFA: Critics say that the EU’s FTA with Vietnam will not really enforce human rights standards and will continue offshoring jobs that leave workers vulnerable. How do you argue against that?

Malmström: We have in the trade agreement a sustainable development chapter. We have been pushing the Vietnamese authorities to ratify the core ILO [International Labour Organization] conventions that they have signed up to, and we think one of them will be voted on tomorrow [June 14]. There’s a process for the others as well, and that’s a good thing. We’ve been pushing them in the context of the trade agreement to do that. There is also language on labor tights, on environmental rights, and on human rights in the trade agreement. The trade agreement comes together with a broader agreement — an association agreement — that also contains very strong language on human rights, and we have in that context already set up a dialogue for human rights. We are concerned about some of the human rights situations in Vietnam, and of course, a trade agreement is not going to take all that away, but it creates a platform together with the association agreement to continue to engage, to push, and to work with the Vietnamese authorities to improve the situation.

RFA: Critics also have said that the EU is not applying consistent standards by signing an FTA with Vietnam while going after Cambodia and Myanmar for human rights abuses. Your response?

Malmström: They are two different things because when we gave these trade privileges to Myanmar and to Cambodia, it was well understood that these countries are by no means perfect democracies, and we’re not punishing them. But it says in the legal text that if they are going backwards, if the situation is not moving in the right direction, we can take action. We actually have a legal obligation to have a look at this and to make sure that we start this investigation or this closer engagement in order to see if these [trade] preferences can be partially withdrawn. With Vietnam, we know that there are problems in the human rights area. Nobody denies that in any way. But we still think that a trade agreement is good economically. It’s also a possibility for us to engage with a country with which we work in order to try to push it. ... We have strong engagement when it comes to our values in our trade agreements. [We are] also aware that a trade agreement alone cannot solve all political and social problems in a country. It can contribute if it’s well used, but it needs to be complimented by political will in that country and also [by] lot of other tools.

RFA: The EU sent a delegation that included representatives from the European Commission (EC) on a fact-finding mission to Cambodia in early June as part of the procedure triggered in February over EBA preferences. What was discussed?

Malmström: That is part of the process that we announced last year of a possible withdrawal of the EBA preferences in Cambodia because of violations of human rights, labor rights, and other issues. The announcement is not an automatic thing. It’s the start of a long process where we want to engage with Cambodian authorities. We have been speaking to them on different levels. The ministers have been here. They’ve been meeting with me and some of my colleagues, and we have also had different missions. [Regarding] the last mission, we’re just about to make conclusions about that visit with the ministerial [officials], with civil society, and with different stakeholders in Cambodia in order to get as broad a picture as possible with full transparency vis-à-vis the authorities with their participation, and in dialogue with them to explain what we expect of them and to make clear that we expect them to take measures. This will result in a report, and then the Cambodian authorities have until mid-August to respond. We then will discuss it and make another report and engage with member states on this and see where we are in about six months.

RFA: Given the repressive situation in Cambodia under Prime Minister Hun Sen, how hopeful are you that the human rights situation there will improve?

RFA: Where do you see Cambodia heading?

Malmström: This is very much a process. It is conducted in full transparency and with steps involving the possibility for Cambodia authorities to respond. I mean, why are we doing this? It’s not to punish. [We] gave the EBA to Cambodia, and it has been important [and] very useful to them. It has increased employment and increased exports. That’s the whole point of it. But it does contain in the legal text that if there is a deterioration of issues such as human rights or labor rights, they [the trade preferences] can be partially or fully suspended, so the Commission has an obligation to check that. We do think that compared to a few years ago, the situation is going backwards, so we have an obligation vis-à-vis our stakeholders, not only the companies, but also the European parliament and our member states, to be watchful here. That’s why we have issued this very serious warning. But still the process is not completed yet.

Malmström: With Myanmar, Cambodia, and Bangladesh, we are looking at them specifically because there have been worrying developments in human rights in all these three countries. The formal procedure has not been initiated with Myanmar yet, but we have warned them that it could be. We have sent missions there as well. We’ve started to engage with the authorities. The European Union's special envoy on human rights is there right now this week [for the Fifth European Union-Myanmar Human Rights Dialogue in Naypyidaw on June 14], to talk about human rights, and we are also trying to coordinate this as much as possible with the United Nations. The demands that we are trying to push on Myanmar are very much aligned with the recommendations outlined in the [Kofi] Annan report when it comes to the situation of refugees and their return, and making sure that people are held accountable for crimes within legal processes. But there are also some general issues there where we are worried about freedom of speech and the situation of civil society.

RFA: What has been the response so far from the Myanmar government?

Malmström: We are talking with them. We’ve had ministers [come] here for meetings, and I have met with them, and my colleagues have met with them as well. As I said, we have the special envoy now in Myanmar to talk about these things, but we are very worried about the situation. There are reports coming all the time that the refugee situation is not getting any better, and the violence against the Rohingyas might be a little bit less than what it was a year ago, but it’s still very much there. And as you recall, the report that was made on behalf of the United Nations said that there was basic ethnic cleansing or genocide going on there, and these are very strong words.

RFA: About a year ago the EU imposed financial asset freezes and travel bans on seven military officials and others deemed responsible for human rights violations against the Rohingya in Rakhine state. Could others in Myanmar be subject to these restrictions?

Malmström: Yes, but that is outside the trade agreement. That was done by our foreign offices and [EU foreign policy chief] Frederica Mogherini, who is working on these issues, but that has not been excluded. That is not in the trade portfolio, but of course, we try to coordinate our policies on Myanmar. We talk to each other all the time. But exactly where they are on that, I don’t exactly have that knowledge.

RFA: What does the EU want to see done about the Rohingya crisis and other grave human rights issues in Myanmar?

Malmström: We understand that the situation will take time to resolve, and that it is a very complicated situation. That’s why we have [made] the same request as the United Nations, [and] we are coordinating very much with the Annan group's report, which means a safe return of refugees, an end to the violence, access by rescue and humanitarian staff to the areas, and that the responsible people are brought to justice.

Malmström: I have never met her personally. I think that many people hoped that she would play a stronger role in the transition period of her country. We, of course, understand the limits with the military government. She was an icon, and lots of hopes were put on her. We hope that she can be more forceful in condemning the violence against the Rohingyas.

Malmström: The ASEAN [Association of Southeast Asian Nations] region [and] Asia are important partners for the European Union, and it’s important to work together and to try to build alliances and cooperation. We are working on the prospect on a long-term basis of having a trade agreement between the EU and the ASEAN countries. We have a very far-reaching agreement with Japan, we have one with Korea, and we have one with Singapore that will enter into force this fall. … So we have trade relations with them, but we are worried about the degenerated situation for human rights in the area. That is something that really must be taken seriously and that must play into this picture as well.