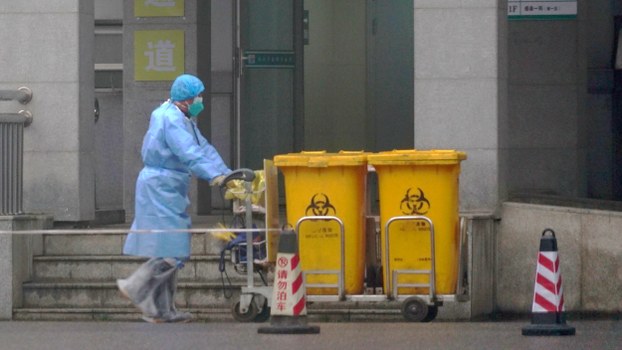 Staff move bio-waste containers past the entrance of the Wuhan Medical Treatment Center, where some infected with a new virus are being treated, in Wuhan, China, Jan. 22, 2020.

Chinese state media cited local health authorities in the XUAR as saying that a 47-year-old man identified by the surname Li and a 52-year-old man identified as Gu had been confirmed infected by the novel coronavirus (nCoV) as of 6:00 p.m. local time on Thursday. Both had been to Hubei’s capital Wuhan, where the virus is believed to have been first transmitted to humans, they said.

The two were among the latest confirmed cases of the virus, which the official China Central Television (CCTV) said had infected nearly 650 people, including 10 people in the U.S., Thailand, Japan, South Korea, Singapore, and Vietnam. At least 18 people have died in the outbreak, all within China.

By late on Thursday, authorities in Hubei had instituted a travel ban in and out of Wuhan, as well as seven other cities in the province, leaving more than 18 million people under restrictions, as international health experts estimated that between 1,300 and 1,700 people in Wuhan alone have likely been infected.

Amid the concerns of a rapidly spreading virus, experts have warned of a particularly acute risk of infection for those caught up in Beijing’s policy of mass incarceration in the XUAR, where authorities have placed as many as 1.8 million Uyghurs and other Muslim minorities accused of harboring “strong religious views” and “politically incorrect” ideas in a network of internment camps since April 2017.

While Beijing initially denied the existence of the camps, China last year changed tack and began describing the facilities as “boarding schools” that provide vocational training for Uyghurs, discourage radicalization, and help protect the country from terrorism.

But reporting by RFA’s Uyghur Service and other media outlets indicate that those in the camps are detained against their will and subjected to political indoctrination, routinely face rough treatment at the hands of their overseers, and endure poor diets and unhygienic conditions in the often overcrowded facilities.

RFA has confirmed dozens of cases of deaths in detention or shortly after release since the internment system began, and while only a handful can be definitively linked to torture or abuse, several appear to be the result of “willful negligence” by authorities who do not provide access to sufficient treatment or poor camp conditions that exacerbate an existing medical condition.

Noting the reports of the two confirmed cases in the XUAR on Thursday, Adrian Zenz, a senior fellow in China Studies at the Washington-based Victims of Communism Memorial Foundation and one of the world’s foremost experts on mass incarcerations in the region, tweeted that the coronavirus could “add an entirely new dimension to the Xinjiang crisis.”

James Millward, a professor of Chinese History at Georgetown University in Washington who has written extensively about the XUAR, said that authorities at the camps are not equipped to handle an outbreak of this severity and should immediately release detainees from the facilities and associated factories, where reports suggest they are being subjected to forced labor.

“Guarding against epidemics was one of the first requisites in [the] Zhu Hailun manual on setting up camps,” Millward wrote in a post to his Twitter account, referencing a recent leak of official Chinese documents known collectively as the “China Cables,” that included the first known “manual” for operating internment camps in the XUAR.

Austin Ramzy, a journalist with The New York Times, cited reports from former camps detainees who had told the newspaper that “the health and sanitary conditions in the indoctrination camps can be poor.”

“If outbreaks happen there it could be a huge and likely hidden problem,” he tweeted on Thursday.

Speaking to RFA’s Uyghur Service on Thursday, Dolkun Isa, the president of the Munich-based World Uyghur Congress exile group, said a spread of nCoV to the XUAR’s internment camps would have “serious implications” for Uyghur detainees and that “the lives of millions of people will be at stake.”

“We know for a fact that the conditions in the camps are horrible—many people have contracted serious sicknesses due to the overcrowded and filthy conditions,” he said, noting that poor food quality, lack of medical care, and even torture, can also contribute to the weakening of detainees’ immune systems.

“China should do everything in its power to prevent the spread of the Wuhan virus into any camps because the consequences will be catastrophic, resulting possibly in the deaths of tens of thousands of Uyghurs arbitrarily detained in the past three years.”

Isa called on China to allow the World Health Organization and the International Red Cross unimpeded access to the camps to oversee what is being done to prevent a viral outbreak, and urged the United Nations to discuss measures with Beijing to fight the spread of nCoV in the facilities.

“I also call on China to release the Uyghur and other detainees from concentration camps amid the current serious situation,” he said.

Earlier this month, the Congressional-Executive Commission on China (CECC) said in its annual report on human rights in China that the XUAR camp system meets definitions laid out in the Rome Statute of the International Criminal Court, which lists acts that may constitute "crimes against humanity."

What China should do and what will do are vastly different things. I shudder to think.