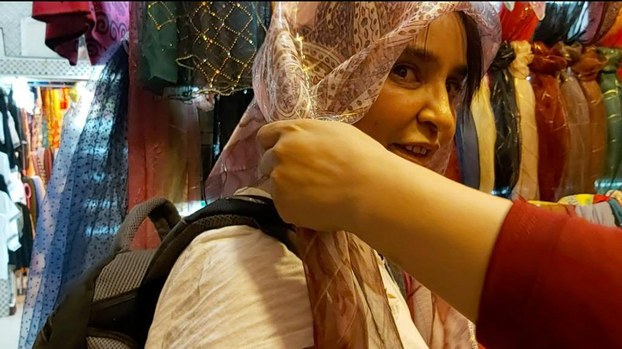 A Jordanian journalist who traveled to northwest China’s Xinjiang Uyghur Autonomous Region (XUAR) found reports by the international media about Beijing’s repressive policies targeting ethnic Uyghurs to be “100 percent true,” and warned that the situation is “feeding extremism” within the community.

Nihad Jariri visited the XUAR for three weeks in July to get a “more realistic perspective” on life in the region, where authorities are believed to have held more than 1.5 million Uyghurs and other Muslim minorities accused of harboring “strong religious views” and “politically incorrect” in a vast network of internment camps since April 2017.

The freelance reporter traveled on a tourist visa to avoid state-assigned handlers who prevent members of the media from speaking with residents outside of government-orchestrated events featuring Uyghurs and officials professing their loyalty to the ruling Communist Party.

Upon her arrival in the XUAR capital Urumqi, Jariri said her first 24 hours were “shocking,” because everything she experienced seemed to contradict reports about the camps and other abuses in the region.

“I thought that everything I read and saw on the news, based on the people around me, was not entirely true … [and that] maybe there’s another story to this [situation],” she said.

“That’s the most dangerous thing about this issue for a tourist or a first time visitor … life seems so normal, and even happy … The streets are so wide and so clean, and people are always well-dressed, and that was so refreshing.”

But Jariri said that her impression quickly changed when she asked to visit a mosque to pray.

“That’s when I started to see the bitterness and the acting and the suffering that these people have to endure—they suffer in silence,” she said.

Uyghurs that she asked about a mosque “became tense,” according to Jariri, who said they indicated to her that the buildings were either closed for repairs or only for a couple of minutes at a time—not even enough time to enter and pray.

When she did find a mosque to visit, she was required to pass through a checkpoint in front of the entrance that scanned her face and brought up her identification documents, before indicating to a guard whether or not she could pass.

“The prayer area was cordoned [off] … I had a friend [with me] who asked the guards if I could pray … but they became very tense” and she was not permitted to do so.

Jariri said she had a similar experience after entering Id Kah mosque in the seat of Kashgar (in Chinese, Kashi) prefecture, when she was prevented from praying by guards there.

“Honestly, I was terrified,” she said.

Other incidents in Kashgar city further confirmed her suspicions that Uyghurs face severe restrictions in their daily lives.

At one point, while visiting an area of Kashgar’s historic Old City district, which has been largely razed by authorities, Jariri was alarmed by loud sirens, which her Uyghur companions informed her are sounded every day by police to “warn the evil people.”

Later, she went to Kashgar’s Kona Sheher (Shufu) county to meet a Uyghur translator who was forbidden from leaving the area and was forced to exit her taxi and submit to a facial scan and questioning by police officers upon her arrival.

When she was eventually allowed to continue on her way, she contacted the translator to cancel their meeting, fearing that he could be put at risk, but he insisted that they proceed with their plans to have lunch together.

“In less than an hour there were six police officers outside the restaurant who took his mobile and read our conversation on [messaging app] WeChat, which devastated me,” she said.

The officers, who were both Han Chinese and Uyghur, tried to send her back to her hotel, but she protested, saying they had plans to visit a local park.

“They said, ‘not today, because the park is closed,’ and they put me in a car that from the outside looked like a taxi, but on the inside was nothing like one—there was no meter, no [payment system], and no ID for the driver, and no cameras,” she said.

“The driver drove … very fast and did not stop at any checkpoint until he dropped me off at the hotel.”

Jariri said that after the incident in Kona Sheher county, she came to realize that the XUAR is “one big virtual prison.

“We talk about the [internment camps], but there is one gigantic prison that is called Xinjiang … and within it there are smaller virtual prisons,” she said, noting that Uyghurs regularly have their movements restricted to certain areas in the region and cannot apply for passports to leave the country without special permission.

But as a member of the media, speaking with Uyghurs to get a sense of what life is like for them in the XUAR is usually impossible, according to Jariri, because “you are most likely with a government guide, so you don’t get to ask questions.”

Traveling in the region as a tourist gave her the freedom to interact with Uyghurs without a handler, she said, and those she spoke with confirmed that “whatever stories we hear from outside sources are 100 percent true.”

“When you hear the same thing [from people with] no communication [with the outside world], you realize that there is nothing misleading or being misinterpreted [in the reports],” she said. “These stories happen—they are true.”

Jariri said that policies in the XUAR are not only aimed at undermining the religious traditions of the Uyghurs, but “erasing [their] entire identity … and assimilat[ing] them into the Chinese culture.”

But oppressive security measures in the region have created a “suffocating situation to the extent that it will backfire,” she said.

“The situation the Chinese government is creating in the region actually is making people think of [separatism],” she said. “They’re creating a new culture of extremism.”