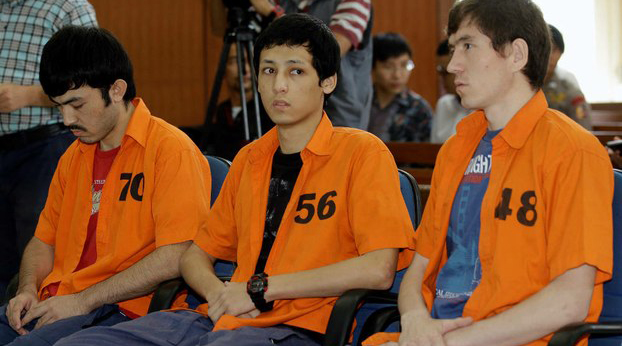 The fate of three Uyghurs allegedly deported by Indonesia to China after serving terrorism sentences is uncertain, with government officials in Jakarta tight-lipped about their whereabouts after they were released from prison.

Two experts told BenarNews last week – citing security sources whom they declined to identify – that the trio and one other Uyghur convict had been deported to China, where authorities are believed to have held close to 2 million Uyghurs and other Muslim minorities in internment camps, which the United States and several other nations have sharply criticized.

Indonesian government officials have not confirmed or denied the claims by the two experts that the Uyghurs were deported to China in September.

“I don’t have any information. Please check with the Ministry of Law and Human Rights,” Foreign Ministry spokesman Teuku Faizasyah told BenarNews, an RFA-affiliated online news service, on Wednesday, when asked to comment on the report about recent Uyghur deportations.

A spokeswoman for the Ministry of Law and Human Rights confirmed that three Uyghurs had been released from prison on Sept.19 and handed over to immigration authorities. A fourth person was still serving a six-year prison sentence, she said.

The three men she named were among four sentenced by an Indonesian court in July 2015 to six years in prison, after being convicted of entering the country illegally with the intention of joining a local Islamic State-linked militant group, the Eastern Indonesia Mujahideen (MIT).

Asked if the three had been deported, Rika referred BenarNews to immigration authorities.

The head of public relations at the Directorate General of Immigration, Arvin Gumilang, told BenarNews, “We don’t have information to share.”

Late last week, two experts told BenarNews that the four ethnic Uyghur men had been deported to China and that the Chinese government paid 100 million rupiah (U.S. $6,812) fines, which were part of their sentences.

Deka Anwar, a researcher at the Institute for Policy Analysis of Conflict (IPAC), and Muhammad Taufiqurrohman, a senior researcher at the Center for Radicalism and Deradicalization Studies (PAKAR), did not disclose their identities of their sources.

“They were deported in September and the fines were paid by the Chinese government,” Deka said, citing sources at the prison where the men had been held.

“Immigration officers came to Nusa Kambangan with a letter to pick them up, saying they were to be transferred to an immigration detention center,” Taufiqurrohman told BenarNews. He also confirmed the information that Chinese authorities had paid the Uyghur men’s fines.

Taufiqurrohman said Indonesia carried out the deportation of the four men in secret because many in the world’s most populous Muslim-majority nation criticize China’s alleged mistreatment of the Uyghurs, who mostly live in the Xinjiang Uyghur Autonomous Region (XUAR) in northwestern China.

“The [Indonesian] government would be heavily criticized and be labelled as complicit in the Chinese government’s oppression of Uyghur Muslims,” if the deportation of the Uyghurs was made public, Taufiqurrohman said.

For more than three years, the Chinese government has imprisoned hundreds of thousands of Uyghurs in detention camps and subjected those not detained to intense surveillance, religious restrictions and forced sterilizations, said a report published in June by the Council on Foreign Relations, a U.S.-based think-tank.

Chinese officials have repeatedly denied these allegations, saying the camps are centers for vocational training and that the thousands of Uyghur Muslims arrested had links to extremism.

‘The same as killing them’

Four years ago, Indonesia turned down a request from the Chinese government to exchange a fugitive Indonesian banker captured in China for four Uyghur prisoners serving terrorism-related sentences.

Indonesia told China that a prisoner swap wasn’t possible because the charges against the four Uyghurs were different from those against the Indonesian banker.

Back then, an Indonesian official who requested anonymity said Indonesia would face international pressure if the country agreed to deport the Uyghur prisoners to China.

“Giving Uyghurs back to China is the same as killing them. Most probably, the Chinese government will execute them instantly,” the official told BenarNews in April 2016.

Thousands of Uyghurs have fled China since their alleged persecution began in 2012, and made their way to Turkey and other countries.

IPAC’s Deka said that between 2014 and 2016, at least 13 Uyghurs had entered Indonesia illegally via Malaysia and joined radical groups.

The four Uyghurs convicted in 2015 came to Indonesia with the intention of joining the militant MIT group and “performing acts of terror,” said the judge who led a panel of jurists that convicted the men.

The Uyghurs’ lawyer had argued that they were Turkish citizens vacationing in Indonesia, but government lawyers said the men had fake Turkish passports and were en route to meet Indonesia’s most wanted terrorist of that time, Santoso, when they were arrested in Central Sulawesi in September 2014.

Santoso was killed by security forces in July 2016.

Six Uyghur men who joined MIT were killed in 2016 during a large security operation in Poso regency.