Judges from inner China are being sent to the country's northwest to assist in the trials of Uyghurs.
2010-12-29
Tweet 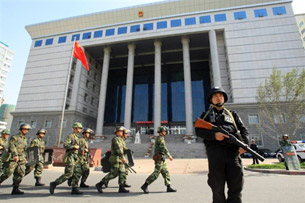 Beijing has ordered a number of Han Chinese judges from eastern Jiangsu province to relocate to China’s northwest in an apparent bid to deal with cases brought against Uyghurs in the aftermath of deadly riots last year.

According to a report published on the official Xinjiang News website on Monday, citing an article in the Jiangsu Legal Daily, “politically-motivated and experienced” judges from the Jun’an High Court in Jiangsu will be sent to the Xinjiang Uyghur Autonomous Region (XUAR) in 2011 to “bolster the judicial field.”

The report did not provide details of what the most pressing judicial needs in the XUAR are or how many judges would be sent to the region.

“The judges will assist in special cases and educate members of the judiciary to improve their ability,” the report said.

“Judges will be required to preside over at least one large and one sensitive case each year, and must show success within three years' time,” it said.

Behtiyar Omer, a Uyghur who worked as a lawyer in the XUAR for eight years before moving to Norway, said that judges from different parts of the country had worked in the XUAR in the past, but never before in such a capacity.

“The exchanging of judges has occurred before between the Uyghur region and other provinces, but the term would only last 1-2 weeks, and the purpose was related to government-funded travel and vocational training, not for providing assistance or cooperation,” he said.

An earlier report published in August on the Xinjiang News website quoted an order given to judges from inner China by judicial authorities at a work meeting in the XUAR to “make haste with cases that had been pushed along by local judges and to set priorities on cases earmarked by local judges.”

Officials at the work meeting revealed that Beijing began transferring judges from inner China to the XUAR immediately after the July 5, 2009 ethnic violence in the capital Urumqi, which left some 200 people dead, according to the Chinese government’s tally.

Behtiyar Omer said disagreements between local Han Chinese judges and those from outside the XUAR on how to decide cases had derailed earlier trials in the region.

“The judges from other provinces may be more impartial while making their decision than local Han judges, because they don’t harbor animosity toward the Uyghur people, while the local Han judges were more motivated by the ethnic tension in the region,” Behtiyar Omer said.

“This is what led to a divergence in decision-making in the cases.”

For ethnic Uyghurs, justice may not be well served by Han Chinese from within or outside the autonomous region, some Uyghur experts said.

A former Uyghur judge from Urumqi, who now lives in Washington and asked to remain anonymous, said the relocation of judges from inner China to the XUAR will dampen the prospects of a fair trial for Uyghur detainees.

“The transfer of judges from other provinces is a not good thing for Uyghur detainees because the judges can’t speak the local language and don’t understand the traditional life and culture of the Uyghurs,” he said.

On March 7, XUAR governor Nur Bekri reported that 197 Uyghurs had been charged on 97 counts related to the riots, and that the number of trials would increase as investigations continued.

Rebiya Kadeer, the outspoken leader of the Munich-based World Uyghur Congress, has claimed that as many as 10,000 Uyghurs “disappeared” after the event, though Chinese officials say 1,400 Uyghurs were detained for their role in the violence as of August this year.

Chinese authorities have only published information about dozens of related cases and the names of just over 50 detainees, while the fate of others remains unknown due to a lack of transparency in the trial process.

Uyghurs living outside of China say that cases against Uyghurs in the XUAR have been further complicated by simmering tensions in the region.

They say that the families of Han Chinese victims of the riots have been pressing officials to exact a swift and harsh punishment to the Uyghurs involved in the incident, but the courts fear that to do so might spark further ethnic unrest.

World Uyghur Congress spokesman Dilshat Raxit said that discrimination against Uyghurs is inherent in the system of Chinese rule in the XUAR and would continue to undermine the judicial process there.

“The cause of the problem is rooted in the system, and until the authorities accept peaceful demonstration as a human right and accept international standards of justice, inequality and unrest in the region will continue, regardless of whether judges are local or from inner China.”

The name of the city is not Jun'an but Huaian. The characters are very similar, but one has a water radical and the other has an ice radical.