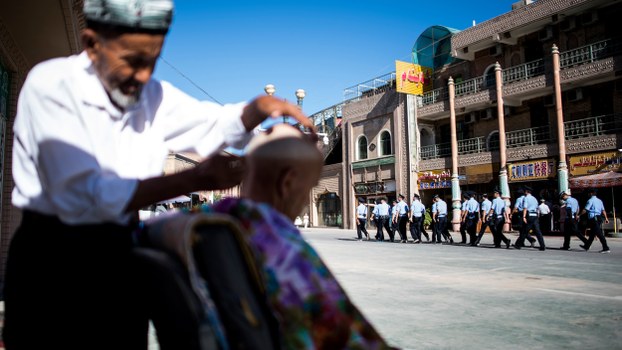 Police walk past a barber near the Id Kah Mosque in the old town of Kashgar in China's Xinjiang Uyghur Autonomous Region, after the morning prayer on Eid al-Fitr, June 26, 2017.

The U.S. recently sanctioned a hair products company based in China’s Xinjiang Uyghur Autonomous Region (XUAR) for its links to forced labor, but a closer investigation by RFA’s Uyghur Service shows that several firms in the area operate similar business models and are likely linked to internment camps.

On May 1, U.S. Customs and Border Protection (CBP) placed a withhold release order on hair products made by Hetian Haolin Hair Accessories in order to ensure that products made with forced labor do not reach U.S. stores. The company was registered in an industrial park in Hotan (in Chinese, Hetian) prefecture’s Lop (Luopu) county, in the same location as an internment camp.

In its announcement, CBP said it will “detain imported merchandise made wholly or in part with hair products” manufactured by Hetian, citing “information that reasonably indicates the use of forced labor.” U.S. importers will be required to demonstrate that the merchandise was not produced with forced labor if they want to sell it inside the country.

Haolin is the second company whose products have been banned by CBP on the grounds that they are using Uyghur forced labor in their supply and manufacturing chains. Previously, CBP also banned goods from a company named Hetian Taida.

Uyghur exile groups welcomed the decision and encouraged other nations to take similar steps to address the importation of goods made with forced labor at factories that are increasingly linked to the XUAR’s vast network of internment camps, where authorities are believed to have held up to 1.8 million Uyghurs and other Muslim minorities since April 2017.

China is the largest exporter of hair in the world, supplying more than 80 percent of hair-based products, including human-hair wigs and false eyelashes made from human eyelash hair.

According to the Statista website, the U.S. is the largest importer of human-hair products from China, and in 2018 alone imported more than U.S. $3.15 billion of those products, or 42 percent of China’s total exports.

Haolin, which was founded in January 2018 with an initial investment of 8 million yuan (U.S. $1.1 million) by a private investor, describes its business as primarily engaged in “gathering and treating hair,” as well as exporting products.

A Uyghur employee of the Lop county management office confirmed that Haolin had been registered in an industrial park which, according to a recent report by the Asia Central Times is a 400-mu (65-acre) complex specifically built for companies manufacturing products made from human hair. The park was built close to the Beijing Industrial District in Lop in 2018 and now is home to 24 different companies that employ 4,000 local Uyghurs.

“I issued a license to that factory, but I don’t know very much about what kind of hair they make,” she said, speaking on condition of anonymity.

In December, the official Xinjiang Daily published an article entitled “Listen to the Graduates of Education Centers,” which purported to show, via accompanying photos, “graduates” from the camps who had been assigned to work at factories near their homes, including factories in the Lop industrial park.

The article cited Uyghurs who had been sent to work in the factories, including one Memetjan Mettohti, who is quoted as saying that if he hadn’t been sent to a camp, “it’s possible that I would have gone even further down the wrong path—it saved me and gave me a new life.” Mettohti was reportedly let out and sent to work in a factory in December 2018 after having gone into a camp the previous year.

The increase in hair production in Lop, which has been publicly encouraged by local officials, corresponds to explosive growth in the hair products industry in China.

RFA was able to determine that many Haolin products are partially processed in Lop factories, after which they are sent to factories in Shandong province’s Qingdao city for further processing before being sent to the U.S. and other countries.

A representative of Emeda Wigs, an export company in Qingdao, confirmed to RFA that the hair the company uses in several of its products originates in the XUAR, but refused to provide further details, citing “company secrets.”

“We have our own manufacturer, we just go [to the XUAR] to source materials,” she said, when asked about the company’s product referred to as “dark brown virgin Xinjiang human hair.”

The source of the hair used in products being manufactured in the XUAR remains unclear, and RFA was able to learn little from those in the industry who were willing to speak on the record.

But Uyghur cultural traditions dictate that women leave their hair long and there is no history of people selling their hair in the region, raising suspicions about whether in addition to using forced labor to manufacture hair products, the raw hair may be coming from detainees in the XUAR’s camp network.

In testimonies shared with RFA and other outlets, at least 10 female former camp detainees have described having their heads shaved immediately upon entering the detention facilities, although they were unsure of what happened to their hair after it was cut.

RFA recently spoke with a Pakistani trader who gave his name as Amir and claimed to have visited a Haolin factory in Lop county four months ago where he said he saw Uyghurs newly released from the camps who had been sent there for work.

Amir, who has since closed his store in Lop and returned to Pakistan, reported that he stopped trading in hair products once he learned from a friend who works in the camps that the raw material was hair “taken from detainees.”

“I visited several firms [in Lop],” he said, adding that “Uyghurs work there—those who were sent for training,” using a euphemism for detention in the camps.

Amir cited his friend as saying that the heads of all detainees are shaved when they are sent to the camps.

“That is the hair [that is sent to the companies],” he said.

“I have a friend who works in a camp. He told me that the companies take away all of the hair.”

RFA was unable to independently verify the Pakistani trader’s account.

‘It just grows back’

Teng Biao, a Chinese human rights lawyer and activist who is now living in exile in the U.S., told RFA that the shaving of heads is regulation in Chinese prisons and detention centers, and suggested that local authorities would likely try to profit from the practice.

“There are no rules about how to deal with the hair of people in prisons—it’s very difficult to supervise or place restrictions from above on how to deal with hair that has been forcibly removed,” he said.

“As a result, this has also created an environment in which [officials] are not going to turn down the economic benefits of hair that has been shaved off of people in government camps.”

Ethan Gutmann, a human rights researcher and current China Studies Research Fellow at the Washington-based Victims of Communism Memorial Foundation, cited the practice of harvesting organs from executed prisoners in China as evidence that local authorities could be using other materials from those in detention to make money.

He echoed concerns that the testimonies of Uyghur women who have emerged from the camps suggest the hair of detainees may be getting collected and sold off to local companies for processing.

“What is distinctive about the women’s haircut—and this is really important, I think—is several of them described putting their head through a hole in a window,” he said.

In addition, Gutmann said, many detainees have been held in the camps for years, providing authorities with a replenishing supply.

“You’re getting it from everybody, and it just grows back,” he said.

“I can’t imagine the Chinese throwing that out … It’s essentially making a business that isn’t a transplant business, it’s a separate business, but it’s using a byproduct of the body.”

Products made with forced labor such as the hair products from Xinjiang should indeed be interdicted and banned for sale as imports.