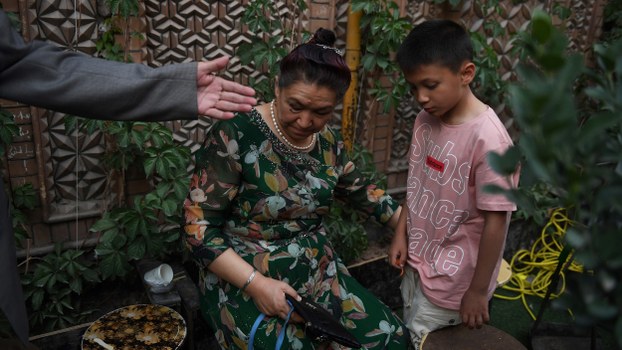 A Uyghur family is shown in a restored section of the XUAR's Kashgar old city, June 1, 2019.

Authorities in northwest China’s Xinjiang Uyghur Autonomous Region (XUAR) are ordering Uyghurs to “modernize” the interiors of their homes by ridding them of traditional ethnic decor and adding Sinicized furniture, largely to the benefit of majority Han Chinese entrepreneurs, sources said.

In recent months, officials in the XUAR have been promoting the “Sanxin Huodong,” or “Three News,” campaign to force Uyghurs and other Muslim minorities to abandon the rugs and pillows they traditionally use as furniture in their homes and replace them with sofas, beds, and desks, according to Uyghur sources inside the region and living in exile abroad.

The campaign follows one in which authorities in the XUAR allocated more than 4 billion yuan (U.S. $575 million) to “modernize” the lifestyles of residents in the region, in part by destroying elements of traditional Uyghur design, including mihrabs, or ornate domed niches built into a wall or ceiling to denote the correct direction one should face when praying to Mecca.

Those who do not follow the directives risk being labeled religious extremists and placed in the region’s vast network of internment camps, where authorities are believed to have held some 1.8 million Uyghurs and other Muslim minorities since April 2017.

After receiving information about the implementation of the Sanxin Huodong campaign in Kashgar (in Chinese, Kashi) city’s Nezerbagh township, RFA’s Uyghur Service contacted a government employee there who refused to comment on the situation.

But RFA was able to speak with a member of a work group in Kashgar prefecture’s Yengisheher (Shule) county who said that residents are tearing out the prior designs of their homes and renovating them according to the requirements of the new campaign.

“It’s the Sanxin Huodong—right after we moved here, [authorities] held a meeting about it after the flag-raising ceremony one morning … and they talk about it once a week now,” the work group member said, speaking on condition of anonymity out of fear of reprisal.

“The ‘Three News’ means, firstly, having sofas at home, secondly, having beds, and thirdly, having a table for studying or a study desk for the children … Previously, people put down felt mats or carpets [as furniture].”

The work group member said that often the new beds Uyghurs place in their homes are provided to official Han Chinese “relatives” who Uyghur families are required to invite into their homes and provide with information about their lives and political views as part of the “Pair Up and Become Family” campaign that was launched in the XUAR in late 2017.

“Yes, they sleep in their shared beds,” the work group member said, referring to the “relatives,” who also subject their hosts to political indoctrination during their visits.

In the village in Yengisheher county where the work group member is based, they said that “more than 80 percent of people” have complied with the Three News campaign.

“My sense is that it has exceeded 80 or 90 percent,” the work group member said.

RFA also spoke with a resident of Hotan (Hetian) prefecture’s Guma (Pishan) county, who said that since the campaign was started, she had remodeled her home so thoroughly that “you can’t even recognize it anymore.”

“We put in sofas and coffee tables, and beds with mattresses, and the rooms are all redecorated,” she said.

“Those who left for education [were detained at internment camps] will have hard time recognizing it if they come back.”

The Guma county resident said she had “gotten rid of pretty much all of the carpets” after her family was ordered to comply with the campaign by village officials.

“Even if they hadn’t ordered us, we would follow our other neighbors [in what they do],” she said.

“We don’t even wait for the officials to tell us what to do anymore because we all are so enlightened now.”

When asked whether she has anything resembling a mihrab or other traditional Uyghur designs in her home, the Guma resident seemed surprised.

“Goodness, no—what are you talking about,” she asked.

“These are things of the past, and we are so advanced now.”

All of the changes had been made to her home since her husband was detained at an area internment camp, she added.

Zumuret Dawut, a Uyghur mother of three who in April 2018 was detained for months in an internment camp and only released after her Pakistani husband advocated on her behalf, told RFA that she had been made to comply with a version of the Three News campaign as early as October 2018, after having returned to her home in the XUAR capital Urumqi.

“Uyghurs everywhere have always used platforms and other kinds of [non-mattress] beds in our homes, but they have made people get rid of these and told them to put sofas in their place,” said Dawut, who relocated to the U.S. in April 2019.

“They said, ‘between such and such dates, you must destroy the platforms in your homes and put sofas in their place.’”

Dawut said that Han Chinese entrepreneurs selling home goods in the XUAR have stood to benefit the most from the Three News campaign.

“It was October 2018 and I had gone to the market with my sister-in-law because she had just redone her home and wanted to buy a new sofa, but when we got there we saw that all of the stores had sold out of them,” Dawut said.

“They told us that [more sofas] were coming from the interior [of China] and to come back the next week to get one,” she added.

“People had even bought damaged and old sofas. The customers had said, ‘whatever you have is fine, as there’s an order to put sofas in our houses,’ and they took everything they could find … Han owners of home goods and furniture stores were coming to these markets [in the XUAR] from every region, with their cars stuffed full of sofas—even broken ones!”

In July last year, officials in Kashgar and Hotan prefectures told RFA that Muslims were being made to carve out the domed shape of mihrabs, or to fill them in completely, lest they face punishment that could include detention in an internment camp, and that the government had implemented training courses on the correct aesthetics for households.

The officials said at the time that teams of five or six people that include police officers, cadres, and government officials “walk around inspecting neighborhood homes” to ensure they meet “requirements” and that in cases where homeowners were unable to remove mihrabs, workers were sent in to demolish the building.

These actions by the Chinese government are just short of North Korea's control of their society. What is a human being if they can't choose what furniture is in their house. Who's homes are these? The government needs to be sent to "education camps" on respecting others and global human rights policy. So not only do they "allegedly" harvest organs from prisoners, now their telling the homeowners what is allowed in their homes and what religions are acceptable.

>>workers were sent in to demolish the building

very sad, that the communists think that these things will brainwash anyone.

they will only cause the opposite effect.

we will remember all they have done to the good people.