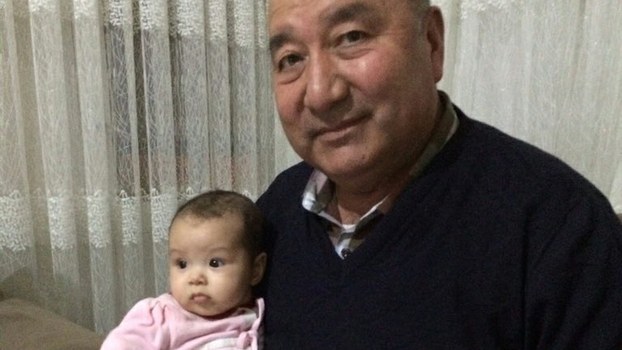 A retired Uyghur driver who disappeared in northwest China’s Xinjiang Uyghur Autonomous Region (XUAR) more than four years ago and was believed held in an internment camp has been confirmed dead by Chinese authorities in response to an inquiry by the United Nations, according to his daughter.

China’s government rarely acknowledges inquiries by foreign authorities or international bodies seeking clarification on the status of missing persons within its borders, particularly ethnic Uyghurs, of whom up to 1.8 million are believed to have been extrajudicially detained in a vast network of internment camps in the XUAR since April 2017.

Fatimah Abdulghafur, a Uyghur poet and activist living in Australia, recently told RFA’s Uyghur Service that she only learned of the death of her father, Abdulghafur Hapiz, earlier this month—nearly two years after it occurred—because the U.N. Working Group on Enforced or Involuntary Disappearances (WGEID) made a formal inquiry to the Chinese government after registering his disappearance in April 2019.

“A letter came directly from the U.N. and they said the contents of the letter came from the Chinese government,” Abdulghafur said.

“The PDF they sent showed his name, Ghopur Hapiz, his passport number, and his household registration in Kashgar (in Chinese, Kashi), and it said he died of pneumonia and tuberculosis on Nov. 3, 2018,” she added, using an alias for her father, who is also known as Abdulghafur Siddiq, Gupur Apizi, and by his Chinese name Apizi Wufuer.

No information was provided about whether Hapiz had been detained or was interned at the time of his death.

According to the Chinese government, Abdulghafur’s mother, Rushangul Abdurehim (Adudureyimu Ruxianguli), who had also gone missing and is believed to have been placed under house arrest, “is living a normal life in society.”

Abdulghafur’s brother Abdusami Ghopur (Abudusemaiti Wufu) and her sister, Meryem Ghopur(Bumairiyanmu Wufu)—both of whom had been registered as missing with the WGEID—were not mentioned in the communication. Her brother is thought to have been detained at an internment camp, while her sister is believed to have been placed under house arrest with her mother.

Abdulghafur told RFA she had last spoken with her father on April 25, 2016 via the Chinese messaging platform WeChat.

“With a sense of urgency in his voice, he left a message saying, ‘Daughter, please call me back immediately—please call me, I have something important to say,’” she said.

“The message came overnight, and after I got up in the morning I listened to his message and tried to call him, but he’d already disappeared. I started looking for my dad after that.”

Abdulghafur said that her younger sister, who lives in Turkey, told her she had learned from a source inside the XUAR that their father had been taken to a camp in March 2017.

“She said someone had sent her a message saying there was a way that she could save him, but she didn’t know how to do so,” Abdulghafur said. “Since going in [to the camp], he hadn’t come out—that’s what she said.”

“They didn’t take my mother and youngest sister in … They put them under house arrest at home, made it so they couldn’t go outside. But they took my younger brother into a camp—Sami Ghopur.”

Abdulghafur tried multiple methods over the past several years to publicize the cases of her family members and to seek information on their whereabouts, including through interviews with media outlets and making inquiries to human rights lawyers in China and other countries, before registering them with the WGEID in April last year.

She said she learned in May 2019 through sources in the XUAR that her brother, who she believes was targeted by authorities because he had traveled to Turkey and taken the holy Islamic hajj pilgrimage to Mecca, had been released from the camp he was placed in. However, she only learned about her father’s death earlier this month after the Chinese government responded to the WGEID inquiry.

Abdulghafur Hapiz, who was born on Jan. 5, 1955, had a long career working in both government offices and private enterprises. For a number of years, he worked at a government travel bureau in Kashgar and later opened a restaurant in the city.

In the 1980’s and 1990’s, Hapiz worked for a branch of the China Youth Travel Service, driving often between Kashgar and Pakistan, and Abdulghafur said that his work in travel exposed him to early abuses of the Chinese state against Uyghurs who traveled abroad.

“The business of forcing Uyghurs to return to the homeland had already started happening in Kashgar in the 1980’s,” she said.

“My father’s boss went [to Pakistan] to bring back young people who’d gone to Karachi to study, who’d gone to study at an Islamic university there. They lied to the students and told them they were going to do this and that for them, but after they brought them back to Kashgar they locked some of them up in jail … my father told us about a lot of things like this.”

Abdulghafur called her father “an open-minded thinker” who was straightforward in expressing his opinions and said she believes that his direct knowledge of government abuses over the past several decades was the reason for his detention.

“He always had his finger on the pulse of what was going on,” she said.

“Whether writers, poets, governors, or mayors, he interacted with them. That’s why my dad had woken up [to what was happening], in spite of the fact that he himself didn’t have the power to do much. He knew what the government was doing.”

Abdulghafur said that she has assisted close to 100 Uyghurs in filling out applications to the U.N.’s WGEID to search for information about their missing family members. She has also begun a formal collaboration with staff of the Uyghur Transitional Justice Database in Norway to help others attempting to locate their lost loved ones in the XUAR.