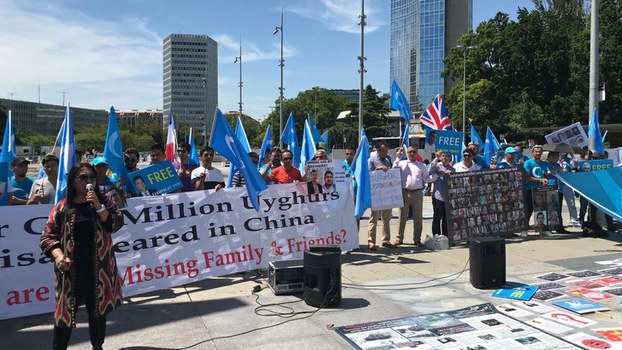 Members of the Uyghur diaspora protest outside of UN headquarters in Geneva, Switzerland on the first day of the Human Rights Council, June 24, 2019.

The case of a Uyghur jailed after urging his coworkers to abstain from activities forbidden by Islam, which was listed among a trove of recently leaked official documents that China’s government has sought to discredit, has been confirmed by employees of the court that sentenced him.

Collectively known as the “China Cables,” the documents also provided local authorities with guidelines on how to prevent escapes, keep the program a secret, and use “points” to grade detainees of the camps, where authorities are believed to have held 1.8 million Uyghurs and other Muslim minorities accused of harboring “strong religious views” and “politically incorrect” ideas since April 2017.

Following ICIJ’s publishing of the China Cables, the Chinese embassy in the U.K. held a press conference denying the existence of “detention camps” in the XUAR and dismissing the documents as “pure fabrication and fake news.”

Among the documents released by ICIJ was a verdict issued following a trial on June 10, 2018 by the Criminal Court of Chakilik (in Chinese, Ruoqiang) County, in the XUAR’s Bayin’gholin Mongol (Bayinguoleng Menggu) Autonomous Prefecture, announcing the sentencing of the employee of a sandstone factory to 10 years in prison and five years’ deprivation of political rights on charges of “religious extremism” and “inciting ethnic discrimination.”

According to the document, the employee had told fellow workers in December 2016 to abstain from pornography and cursing or risk being sent to hell in the afterlife—beliefs traditionally held by more devout followers of Islam—and was detained by police on Aug. 9, 2017. It said he had confessed to his crime “five times.”

While the name of the defendant was redacted, the notice says that his sentence will be completed on Aug. 8, 2027, and lists the judges who oversaw the case as Patigul Rozi, Noruzgul Barat, and Erkin Ghoja-imir, while the person who prepared the document is identified as Rahile Qurban. It was not immediately clear who redacted the document.

RFA’s Uyghur Service recently called the court in Chakilik to investigate the authenticity of the document and to determine the identity and whereabouts of the defendant.

An official at the court who answered the phone in Mandarin Chinese confirmed that the three judges listed in the document preside over cases there, and that Qurban serves as the court reporter.

A second official also confirmed that the four people oversee criminal hearings at the court and, when read details from the notice of the verdict included in the China Cables leak, told RFA in Uyghur that the sentencing had taken place as part of “a case from 2018.”

“I know that there was such a case, but I don’t know who the defendant was,” said the official, who declined to be named for fear of reprisal, but who serves as the head of one of the departments at the court.

“If you want to know more about the case, you will find answers if you go through the normal protocols and channels.”

RFA contacted a third official at the court who, when asked about the details listed in the court document, confirmed that the defendant in the case is named “Nebi Ghoja’exmet,” however, he was unable to provide any details about the man or his family.

“I only know a bit about the case … as I heard about it in the course of doing my job,” said the official, who also spoke on condition of anonymity.

When asked whether he and other court staffers believed Nebi Ghoja’exmet’s sentence was excessive, the official said he was unaware of any kind of response to the case.

“Even if there had been a response to it, we wouldn’t know—we don’t ask about the details of others’ cases,” he said.

The official told RFA that Nebi Ghoja’exmet is being held in “Ulughkol Prison,” also known as “Kunqu Prison” in Mandarin Chinese.

The leak of the China Cables came a week after The New York Times published a 403-page trove of documents it said were released by someone within the “Chinese political establishment” that told of how Chinese President Xi Jinping called for an “all-out ‘struggle against terrorism, infiltration, and separatism’ using the ‘organs of dictatorship,’” in internal speeches following an attack by Uyghur militants that killed more than 30 people at a train station in 2014.

While Beijing has claimed the China Cables documents are fake, ICIJ says they were obtained via a chain of exiled Uyghurs and that their authenticity was confirmed by several leading experts and several intelligence sources who cannot be identified.

RFA’s corroboration of Nebi Ghoja’exmet’s case and sentencing also verifies that the documents are real.

U.S. Secretary of State Mike Pompeo recently said that the two sets of leaked documents are proof that Beijing is committing “very significant” rights abuses in the XUAR.