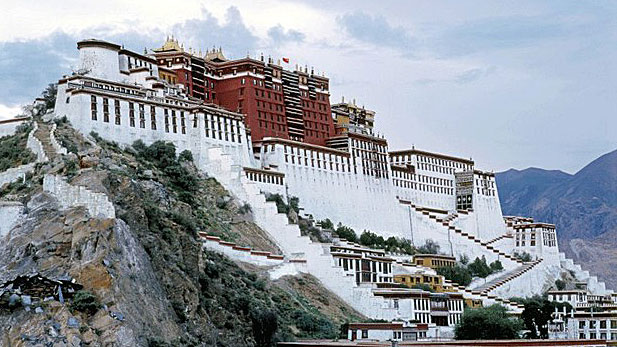 The Potala Palace in Lhasa is shown in a file photo.
Photononstop

Ambassadors to China from Canada and Switzerland made rare official visits to Tibet in September and October, observing local conditions and raising issues of concern with their Chinese hosts, but have remained largely silent so far on what they observed there.

“The Ambassador observed the situation and developments on the ground, engaged with Tibetans, and discussed issues of concern to Canada,” the spokesperson said, noting that foreign government officials require an official invitation to travel to the region.

Also speaking to RFA, Sherab Tharchin—director of the Canada Tibet Committee, an independent NGO—said that Dominic Baton will brief the Committee on Nov. 16 on his experiences in Tibet and share with them what he learned there.

“He will update us on the political and human rights situations inside Tibet and also about the official meetings that he had during this trip,” Tharchin said.

Before leaving for Tibet, Baton and officials from Canada’s Foreign Affairs Office met with the Canada Tibet Committee, where he was briefed on issues of concern to Tibetans living in Canada and their supporters, Tharchin said.

“We apprised the Ambassador of a range of Tibetan issues such as China’s bilingual policy [aimed at] eradicating the Tibetan language, deteriorating religious freedoms, and Tibetan Canadians’ wish to have free access to go to Tibet,” he said.

Switzerland’s ambassador to China Bernardino Regazzoni had earlier traveled in Tibet from Sept. 7-11 in the first official Swiss visit to the region since 2017, Swiss sources said, though an embassy spokesperson in Beijing declined to provide details of the visit or what the ambassador had observed there.

“Switzerland’s FDFA [Federal Department of Foreign Affairs] has already provided relevant Tibetan organizations in Switzerland with a confidential briefing about the Ambassador’s visit,” Tehani Pestalozzi—head of the Culture and Media Section of the Embassy of Switzerland in Beijing—told RFA in a written response to a query.

“Under these circumstances, we do not plan to provide further information,” Pestalozzi said.

In a statement Wednesday, the Tibet Bureau in Geneva—representative in Switzerland and Eastern Europe of exiled Tibetan spiritual leader the Dalai Lama and the India-based Tibetan government-in-exile—noted that the Swiss ambassador had visited Tibet’s regional capital Lhasa and the city of Shigatse during his visit.

“[There he] took the opportunity to address important issues such as the human rights situation with the local government,” the Bureau said, adding that “free access of the UN High Commissioner for Human Rights to Tibet and the protection of Tibetan human rights defenders remain core demands of Switzerland.”

Tightly restricted and controlled tours in Tibet by handpicked government delegations are often staged by Chinese authorities “as an integral part of [China’s] global strategy to hide the realities of what is happening in Tibet today,” the Washington-based advocacy group International Campaign for Tibet said in June, following a visit by foreign diplomats that month to Tibetan areas in western China.

“ICT calls on the members of such delegations from other countries to be mindful of their visits possibly being used for propagandistic means, and to be ready to counter any such state media portrayals, also in public,” the rights group said.

Calls have mounted in Europe this year for member states of the European Union to enact legislation demanding that European diplomats, journalists, and researchers be granted unrestricted access to travel in Tibet—a region largely barred to outsiders while Chinese nationals can freely travel throughout European countries.

In December 2018, U.S. President Donald Trump signed the Reciprocal Access to Tibet Act, a law under which Chinese officials responsible for excluding U.S. citizens, including Americans of Tibetan ethnic origin, from Tibet can be banned from entering the United States.

The law also requires the State Department to provide to the Congress each year a list of U.S. citizens blocked from entry to Tibet.

Reported by Tashi Wangchuk and Ugyen for RFA’s Tibetan Service. Translated by Tenzin Dickyi. Written in English by Richard Finney.