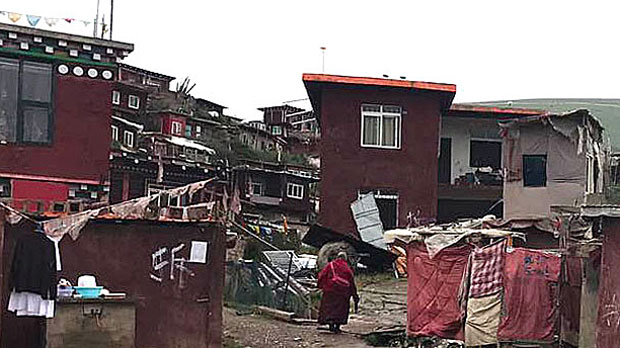 The Yachen Gar Buddhist Center is shown in an Aug. 2017 photo.
Photo from Tibet

Authorities in western China’s Sichuan province have imposed tight travel restrictions on the Yachen Gar Tibetan Buddhist center, barring visits from outside the area and setting up checkpoints to monitor the movements of vehicles, Tibetan sources say.

The new restrictions follow efforts beginning in May to reduce the number of monks and nuns living at the sprawling complex in Kardze (in Chinese, Ganzi) prefecture’s Palyul (Baiyu) county, with thousands forced out and sent back to their hometowns for political re-education.

Now, authorities have issued a temporary travel permit allowing travel to and from Yachen Gar only by those residents allowed to remain, a source living in the area told RFA’s Tibetan Service.

“A large checkpoint has been set up at the outskirts of Yachen Gar and is staffed by police around the clock to make sure that anyone traveling back and forth has the permit in their possession,” RFA’s source said, speaking on condition of anonymity.

“Another checkpoint closer to Yachen Gar also checks for travel permits,” the source said, adding that anyone found moving in or out of the area without permission is considered to be traveling illegally.

The travel permit, a copy of which was recently obtained by RFA, is valid until March 2020 and was issued by Palyul county’s Yachen Monastery Management Committee. It bears the committee’s official seal.

In addition to controlling traffic flows at Yachen Gar, “Chinese authorities have also put up surveillance cameras at all intersections of Yachen Gar and are even using drones to keep a watch on things,” RFA’s source said.

“Under surveillance this strict, including on the internet, anyone passing information to outsiders is putting themselves at risk,” he said.

Since removals began in May, around 3,500 monks and nuns had been forced to leave Yachen Gar, while around 600 Chinese officials had been permanently stationed at the center to “maintain a tight watch” over those who remain and check on all outside visitors.

Last month, Tenzin Dorjee, chair of the bipartisan U.S. Commission on International Religious Freedom, called China’s restrictions on Yachen Gar an “egregious violation of the freedom of religion,” telling RFA at the time that restrictions in Tibet are “going from bad to worse.”