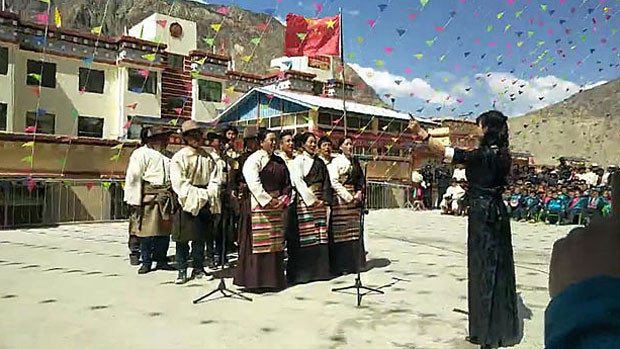 Tibetan villagers in Chamdo sing 'patriotic' songs in a screen grab from a March 29, 2018 video.
Video provided by an RFA listener

The campaign is now under way in all parts of China’s Tibet Autonomous Region (TAR), and stiff fines have been threatened for those refusing to take part, one TAR resident told RFA’s Tibetan Service.

“One member of every Tibetan family has been forced to perform the group songs in front of large crowds,” RFA’s source said, speaking on condition of anonymity.

“Tibetans are not willing to sing the songs, but the Chinese authorities’ grip on the people has tightened year by year, and though they can share their displeasure at the Chinese order among themselves, there is no one else they can complain to,” the source said.

Also speaking to RFA, another Tibetan living in the region said the new campaign was launched to prepare songs for performance on July 1, the anniversary of the founding in 1921 of the Chinese Communist Party.

“Every Tibetan family regardless of their status or condition is being forced to participate in the group trainings to memorize the communist songs,” the source said, also speaking on condition his name not be used.

“Those who have perfected their performance are rewarded, but those failing to take part are fined from 100 to 500 yuan each [U.S. $16 to 78], with fines varying from place to place,” he said.

“The Shigatse region is imposing the heaviest fines,” he added.

No right to refuse

“Our village head has ordered us to sing songs praising the Communist Party on July 1,” another source, a native of Chushur county now working in Toelung Dechen, told RFA.

“But many of us are illiterate and we can’t sing the songs, and we have asked the village head to exclude us from his order,” RFA’s source said, adding that authorities had denied their request and threatened them with fines of up to 500 yuan.

“Our income is very low, though, and these threats of punishment and the psychological pressure have become unbearable.”

“Government officials have been specially assigned to teach these songs,” he said.

“Their aim is to show the outside world how ‘happy’ the Tibetan people are, and to project a false image of Tibetans’ patriotism and loyalty to the Chinese party.”

“We have no right to refuse,” he said.