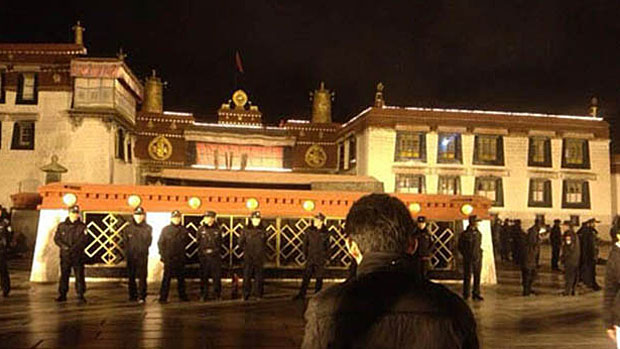 Chinese police line up in front of a monastery in Tibet in a Dec. 26, 2013 photo.
Tibetan Central Administration

Chinese authorities in Tibet are offering large cash rewards to informants in a bid to stamp out online activities considered threatening to Beijing’s control over the restive Himalayan region, with amounts paid out now tripled over amounts offered last year, sources say.

Rewards of 300,000 yuan (U.S. $42,582) are now being promised for information leading to the arrests of social-media users deemed disloyal to China, according to a notice issued on Feb. 28 by three government departments of China’s Tibet Autonomous Region (TAR).

Behaviors specified as illegal include online activities aimed at “attempting to overthrow [China’s] socialist system,” “advocating extremism,” “destabilizing national security,” and “defaming the People’s Republic of China,” according to the document, a copy of which was obtained by RFA’s Tibetan Service.

Attempts to send information on conditions in Tibet to foreign contacts will also be severely punished, the document says.

'No space left for anyone'

“Under these new regulations, the Chinese government is basically curbing the free flow of online information from within Tibet,” Tsering Tsomo, director of the Dharamsala, India-based Tibetan Centre for Human Rights and Democracy (TCHRD), told RFA in an interview.

“And though [the authorities] have linked these regulations to the protection of cybersecurity and national security, in fact they are just another way to keep people uninformed and to bar them from expressing their views,” Tsomo said.

“Raising the amount of the reward to informants from 100,000 yuan in 2018 to 300,000 yuan this year is a threat to citizens who are simply exercising their freedom of expression,” Tsomo said.

Also speaking to RFA, Sonam Topgyal, a researcher at the Dharamsala-based Tibet Watch, said that similar restrictions on internet activities have already been in force in Tibetan areas of China “for a long time.”

“These laws have even been implemented in elementary schools in Tibet,” Topgyal said, adding, “The Chinese government has left no space for anyone to criticize the government in any way, and has deployed informants within different parts of the Tibetan community.”

China’s roll-out in February of the raised reward amount comes amid the launch of a separate Tibet-wide campaign against organized crime and “black and evil forces” that sources in the region say is being used as an excuse to crack down on Tibetans and has led to mistrust within local communities.

The campaign has resulted in the “detention, arrest, and torture of human rights and environmental activists and of ordinary Tibetans promoting the use of the Tibetan language,” TCHRD said in a report released in May.

In Chinese-occupied Tibet freedom of speech is not a protected right. Online speech is also censored. Tibetans cannot freely protest against the PRC Govt & the Party or they risk being jailed and/or fined.