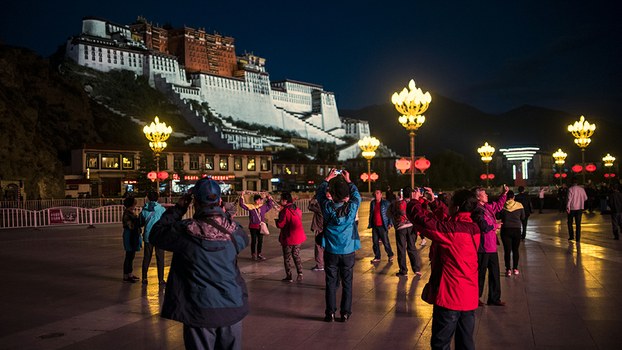 Tourists take photos in front of the iconic Potala Palace in Tibet's regional capital Lhasa, in a file photo.

China “systematically” impedes access to Tibet for U.S. diplomats and officials, journalists, and tourists, and when visits to the region are granted, they are “highly restricted,” the U.S. State Department said in a report that Beijing promptly dismissed as being “full of bias” and harmful to bilateral relations.

In 2018, the Tibet Autonomous Region (TAR) was the only area of China for which the Chinese government required diplomats to request permission to visit, and Beijing denied five of the nine official requests for the U.S. diplomatic mission in China to visit the region, including one from Ambassador Terry Branstad, said the first annual report on U.S. access, submitted to Congress on Monday.

The State Department report was part of the Reciprocal Access to Tibet Act passed by U.S. lawmakers in December, which requires Washington by the end of this year to deny visas to Chinese officials in charge of implementing policies that restrict access for foreigners to Tibet.

When U.S. diplomats received permission through the TAR Foreign Affairs Office (FAO) to travel to the region, “FAO and security personnel tightly chaperoned their trips,” the report said, adding that local authorities in Tibetan areas of Sichuan province “interrogated” U.S. diplomats and denied them access to monasteries despite prior reassurance that they were free to travel there without diplomatic notes.

Tourists were required to obtain an official confirmation letter from the TAR government before entering the region, and were routinely denied access to the region during periods the Chinese government considered sensitive, including the March anniversary of the 1959 Tibetan Uprising against Chinese rule and the July birthday of Tibetan spiritual leader the Dalai Lama.

China “heavily restricted and controlled access for U.S. journalists to the TAR, and directly threatened to expel U.S. journalists reporting on developments” in the region—the only part of the country international reporters were required to obtain official permission to enter, the report said.

The U.S. State Department noted that journalists of Tibetan heritage also faced Chinese government restrictions on their personal travel to China, including an RFA Tibetan Service reporter who was interrogated by authorities at the Baiyun International Airport in Guangzhou in August 2017 and refused entry into the country to visit his mother.

While diplomats and other officials, and journalists, were permitted to travel to Tibetan areas outside of the TAR, they were regularly subjected to monitoring by government representatives, and reporters were in some cases restricted from covering stories there.

The report said that U.S. diplomats observed an increased amount of Chinese surveillance over their movements from 2017 to 2018, while fewer international journalists applied for permission to visit Tibetan areas in 2018 due to what the Foreign Correspondents’ Club of China attributed to the “apparent futility of applying.”

“The United States seeks reciprocity from China regarding the open access that China and many other countries enjoy in the United States,” a State Department spokesman said in a statement issued Tuesday.

“We will continue to work closely with Congress in pursuit of our shared goal of seeing Americans have full access to China, including the Tibetan Autonomous Region and other Tibetan areas.”

Bhuchung Tsering, vice president of Washington-based International Campaign for Tibet, told RFA’s Tibetan Service Tuesday that “justice will be done” later this year, when the U.S. denies visas to Chinese officials in charge of implementing the policies that restrict U.S. access to Tibet.

“It is a fact that Tibetans don’t have any authority and the only authority over the welfare and prosperity of Tibetans inside Tibet is the Chinese government,” he added.

On Tuesday, Chinese foreign ministry spokesman Geng Shuang told a press briefing in Beijing that the State Department report “is in total disregard of facts and full of bias,” and that “China will by no means accept it.”

He defended restrictions on travel to the region based on “geographical and climatic conditions,” and said Beijing encouraged foreigners to visit and conduct business there, provided they abide by Chinese laws and regulations.

“We urge the U.S. to fully recognize the high sensitivity of Tibet-related issues, take concrete measures to remove the negative impact produced by the above-mentioned report, and stop using Tibet-related issues as a tool to interfere in China's internal affairs, so as to avoid damaging our bilateral relations, exchange and cooperation,” he added.

Geng also called the Reciprocal Access to Tibet Act “a serious violation of the basic norms governing international relations” that “grossly interferes in China’s internal affairs,” and warned that the law is “severely undermining China-U.S. cooperation.”

In December, two young Tibetans set themselves ablaze in Ngaba (in Chinese, Aba) county in Sichuan province in opposition to China’s rule, as well as political and religious repression in the TAR and other Tibetan areas.

Before the burnings, there were 155 self-immolations by Tibetans since the wave of fiery protests against nearly 70 years of Chinese rule of their homeland began in 2009.

China maintains that it peacefully liberated the TAR, and that Tibetans enjoy freedom and economic growth it brought to the region.

Reported and translated by RFA’s Tibetan Service. Written in English by Joshua Lipes.

China is losing its generations in Tibet and elsewhere in China because there is no moral glue to hold the society together.

Without training a child to have good character, no accomplishments are possible for them.