A new film, Fire Under the Snow, sheds light on tensions in Tibet by looking at the life of an elderly Buddhist monk, Palden Gyatso, who survived years of torture and abuse in Chinese prisons.
2008-08-11
Tweet 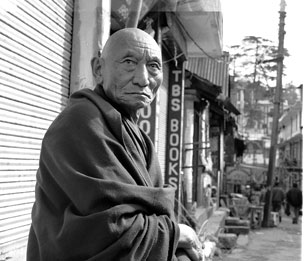 Now, a new film, Fire Under the Snow, sheds light on these tensions by looking at the life of an elderly Buddhist monk, Palden Gyatso, who survived years of torture and abuse in Chinese prisons in Tibet .

The film is scheduled for release early next year and will be distributed by Argot Pictures. Screenings will take place in New York and Los Angeles throughout August.

“When I was in university, I heard the story of the monk who was in prison for 33 years and survived torture and atrocities,” director Makoto Sasa said in an interview.

“His story stayed with me for such a long time,” said Sasa, who moved in 1998 from Japan to New York, where she received an M.A. in Media Studies from the New School University.

Three and a half years ago, Sasa went to Dharamsala, India—seat of the Tibetan government-in-exile— where she met Palden Gyatso and began to shoot her film. She was moved by what she learned of the experiences of the Tibetan people as her work on the film continued .

“What moved me, first, was the Tibetan people’s determination … how they carry themselves, how proud they are of their country and culture,” she said.

Sasa said she hopes that audiences will be inspired by her film to “do something for Tibet,” and that they will become more aware of what is happening in the region.

Palden Gyatso’s life as told in Fire Under the Snow reflects experiences shared by thousands of Tibetans during the period following China’s invasion of Tibet in 1950.

Born in 1933 in the Tibetan village of Panam near Shigatse, Palden Gyatso became a monk at the age of ten and later studied at Drepung monastery outside the Tibetan capital, Lhasa. He was arrested in 1959 for resisting China’s occupation and spent three decades in prisons and labor camps, where he endured beatings, torture, and starvation.

He was labeled unrepentant by his jailers and kept in shackles for years.

In 1990, following his continued efforts to call for Tibetan independence, Palden Gyatso was transferred from a work camp to Drapchi prison in Lhasa. At Drapchi, a prison officer shoved an electric shock baton into his mouth and down his throat, knocking him unconscious and shattering his teeth.

Palden Gyatso was finally released in 1995 at age 61 and escaped to India. He was offered a place in a monastery but chose instead to continue his activism on behalf of Tibet.

In 2006, Palden Gyatso, now in his 70s, spent thirteen days on hunger strike in Turin, Italy, to protest the International Olympic Committee’s selection of China to host the 2008 Summer Games.

“The reason I am unable to rest,” Palden Gyatso says in the film, “is that so many Tibetans have died unjustly.”

Makoto Sasa said that she, too, opposes the decision to hold the 2008 Olympics in Beijing.

It is “absolutely outrageous,” Sasa said, that the 2008 Summer Games were awarded to Beijing in spite of its human rights record.

“Usually, I like to watch the Olympics, but I won’t watch these,” she said.

Tibet expert Elliot Sperling said this position is shared by many in the Tibetan exile community.

Tibet’s exiled spiritual leader the Dalai Lama has publicly supported the Beijing Games, though, and has prayed for their success, said Sperling, author of the East-West Center policy study “The Tibet/China Conflict.”

Sperling said that exiled Tibetans are “more vocal” now in calling for Tibet’s independence—a position at odds with that of the Dalai Lama, who has said that he wants only “meaningful autonomy” for Tibet as a part of China.

“It really has reached the point where there is a big contradiction between sentiment in the exile community and the policies and actions of the Dalai Lama,” Sperling said.

“The ability to venerate the Dalai Lama but not to accept his policies, that’s been there for a long time.”

Following protests by Tibetans throughout the region beginning in March, Marshall said, detention centers are likely overcrowded, “and the jailers, the entire security establishment, are very angry at the protesters.”

“And at least anecdotally, we are seeing lots of references—very few detailed accounts, but references—to severe beatings [and] uses of electric batons,” he said.

“The seeds are really sown here for what in the future could become an even larger and more serious confrontation,” Marshall said. “And none of the measures the Chinese are taking, none of them, are likely to mitigate this.”

Original reporting by Richard Finney in Washington. Edited and produced in English by Sarah Jackson-Han.