Experts say that convictions in Tibet reflect a pattern of secrecy and judicial abuse.
2010-12-22
Tweet 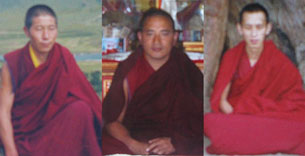 Three high-ranking Tibetan Buddhist monks are unaccounted for after being sentenced to long prison terms by Chinese authorities earlier this year, a Tibetan advocacy group says.

The three men, affiliated with Drepung monastery located outside Lhasa in the Tibet Autonomous Region, were detained in April 2008 following a peaceful protest march by Drepung monks on March 10.

Police blocked the demonstration, sparking rioting in Lhasa and leading to further protests across Tibet and in Tibetan-populated areas of western China.  A subsequent regionwide crackdown by Chinese security forces lasted for much of the year.

The sentenced monks—whose names were given as Jampel Wangchuk, 55, Konchok Nyima, 43, and Ngawang Choenyi, 38—were handed prison terms of life, 20 years, and 15 years respectively, according to a Dec. 21 statement by the Washington-based International Campaign for Tibet (ICT).

“All we are hearing is accounts of their sentencing,” ICT president Mary Beth Markey said in an interview.

“We have no idea of their whereabouts. And there are concerns among the Drepung community that they were picked up merely because they are authorities—senior, prominent monks—and not because they were in fact involved in what the Chinese would consider political activity.”

Markey said that the Chinese government’s handling of the monks’ case underscores a wider pattern of official abuse in Tibetan areas.

“Overall, our concern is that the post-2008 uprising period is being played out before us in a manner that is completely devoid of accountability.”

Notable problems include Tibetan prisoners’ access to family and to lawyers and widespread violations of the rule of law, Markey said.

ICT’s concern now, Markey said, is that the sentenced Drepung monks are being “scapegoated” because of their influence within the religious community, “and not for involvement in any of the demonstrations or protests that happened in and around Lhasa in March of 2008.”

Separately, Tibet expert Robbie Barnett confirmed the sentences handed down to two of the men, Jampel Wangchuk and Konchok Nyima, citing his own sources in Tibet.

The men had been convicted at the end of an “unannounced trial” in June, said Barnett, director of the Modern Tibetan Studies Program at Columbia University.

Charges made against the men remain unclear, though, he said.

“There’s no information in Lhasa about the trial, about where these people are held, or about what they were accused of. ”

“Even by Chinese standards, this is absolutely extraordinary,” Barnett said.

But the sentenced monks would not have to have had a visible role in the protests to come to the attention of the authorities, Barnett said.

“We know that the Chinese penal system works by looking for organizers, and particularly people who might spread ideas … When you get a long sentence in China, it means the authorities think you’ve suggested or organized something.”

Thanks for report. It's reprehensible and totally unacceptable that this is happening. I urge a judicial review to reconsider and to give these monks access to legal advice and contact with families - hitherto denied.