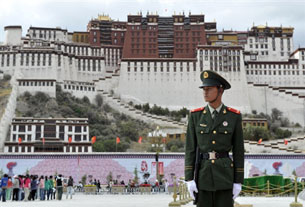 A Chinese policeman stands guard in front of the Potala Palace in Lhasa, June 20, 2008.
AFP

Sporadic demonstrations, both by individuals and by small groups, have continued in the region for more than a year following widespread unrest that began in the Tibetan capital, Lhasa, in March 2008 and spread to Tibetan-populated areas of China.

“On June 28, a young Tibetan, a student at the Guru Teacher Training School in Dzogong [county, of the Chamdo prefecture of the Tibet Autonomous Region] was detained for protesting in Chamdo city,” said a Tibetan man now living in Canada, citing area contacts.

The student, Lobsang Nyendrak, 18, had walked to town with a friend earlier in the day, the man said, speaking on condition of anonymity. Nyendrak  then urged his friend to return alone to the school, saying he had “other business” to attend to.

When his friend left, the source said, Nyendrak pulled out a hand-made banner along with a cloth bearing the colors of the banned Tibetan national flag.  He then walked through the the local market, calling out “Tibet is independent!” and “China quit Tibet!”

“He walked straight toward the police station in Chamdo, calling on Tibetans to ‘rise up’ behind him,” the source said.

Nyendrak was then immediately detained, according to witnesses.

When fellow students learned next day that Nyendrak was being held, six of them went to Chamdo to plead for his release, the source said.

Turned away by police, the students returned to the school and began to organize a wider protest, but the school’s principal blocked their plans.

Then, on July 17, a man named Yonten Gyatso—aged about 40 and a native of Dege in Kham—staged a solitary protest in a Chamdo sports stadium, said the source.

“He ran a complete circuit of the stadium while displaying fliers,” the man said. “The people who were gathered there cheered him on, and there was some commotion. In the fliers, the man gave his name and called on others to protest for the cause of Tibet.”

“A convoy of police vehicles rushed to the scene with sirens blaring,” Dolma said.

“A melee ensued, with Tibetans weeping and people running in all directions,” she continued. “The protester managed to escape in the confusion.”

“Afterward, security was strengthened in Chamdo on the roads nearby, and police were stationed all over.”

The protester was finally detained by police on July 21, she added.

Reached for comment on July 22, local police confirmed there had recently been “some incidents” in Chamdo.

“The persons responsible were not locals, but came from outside the area,” a police spokesman said, adding that one person had been detained the night before and that another, “a student from Tsawa Dzogong,” was already being held.