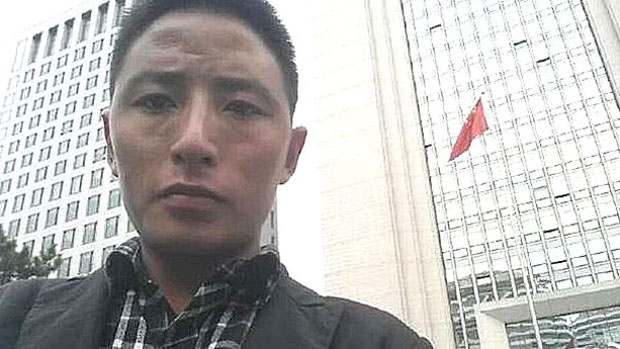 Jailed Tibetan language rights advocate Tashi Wangchuk was denied a visit from his lawyers this week, with Chinese prison officials saying Wangchuk is being punished for being “uncooperative” in prison, one of his lawyers said.

“The prison officials accepted our documents and left the office, and then returned about 30 minutes later to say that what he had given them was not enough, and that we needed a letter from the Ministry of Justice in Beijing,” Liang said.

After reminding prison officials that the Justice Ministry had no mandate to authorize visits, the officials replied that “we would not be allowed to meet with Tashi Wangchuk in any case,” Liang said.

Liang and Lin then went to Qinghai’s Bureau of Prison Administration, where a junior official told them that Wangchuk had never accepted that he had committed a crime, and was uncooperative in prison.

“Given his attitude toward his sentence, you will not be allowed to meet with him,” the official told them, adding that because Wangchuk’s case was “sensitive,” his lawyers should act carefully or risk damage to their careers, Liang said.

“Tashi Wangchuk does not accept his guilty verdict and has told us again to file an appeal, so that’s why we came to see him,” Liang told RFA. “But without meeting him in person, we can’t accomplish many of the tasks required for the appeal.”

Wangchuk has now marked his third year behind bars after being convicted on a charge of separatism for promoting the use of his native language in Tibetan areas of China.

He was sentenced on Jan. 4, 2018 by a court in Qinghai’s Yulshul Tibetan Autonomous Prefecture following a controversial trial in which the prosecution based its case on a video report by the New York Times documenting the activist’s work.

Wangchuk  was arrested on Jan. 27, 2016, two months after the Times ran its report, and was handed a five-year prison term on Jan. 4, 2018 by a court in Qinghai’s Yulshul Tibetan Autonomous Prefecture.

His sentence of five years will include his time already spent in detention.

In the video, Wangchuk is seen traveling to Beijing to press his case for the wider use of the Tibetan language in Tibetan schools. Prosecutors used this as evidence at his trial, despite his repeated disavowals of separatism and his stated intention to use China’s own laws to protect the Tibetan language.

Writers, singers and artists promoting Tibetan national identity and culture have frequently been detained by Chinese authorities, with many handed long jail terms, following region-wide protests against Chinese rule that swept Tibetan areas of China in 2008.