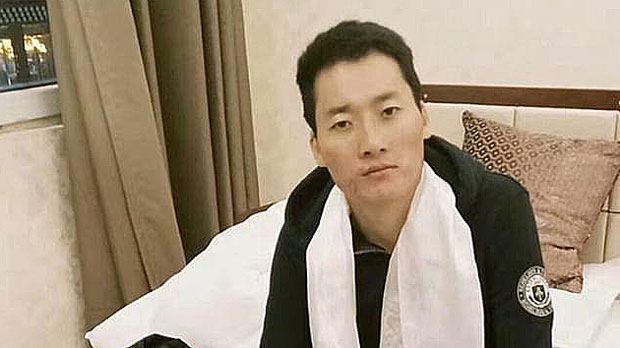 Yonten Rabgye is shown in an undated photo following his release from prison.
Photo sent from Tibet

Authorities in northwestern China’s Qinghai province have released a Tibetan man jailed for just over four years for accessing news reports by foreign broadcasters, releasing him early for “good behavior” and hard work in prison, according to a Tibetan source.

Yonten Rabgye, a native of Chigdril (in Chinese, Jiuzhi) county in the Golog (Guoluo) Tibetan Autonomous Prefecture, was freed on July 26, just under two years before his six-year sentence was due to end, and was taken to his hometown by police, a local source told RFA’s Tibetan Service.

“Some of his family members and relatives had gone to welcome him at the prison gate, but three Chinese policemen escorted him home,” RFA’s source said, speaking on condition of anonymity.

“At present, his overall health condition is in terrible shape, but there is no visible damage to his limbs,” the source said, adding, “At the moment, it is not clear to what extent the Chinese authorities may restrict his movements and conduct in the future.”

Arrested in Chigdril on March 13, 2015 and charged with “accessing illegal Tibetan news content,” Rabgye was sentenced to a six-year term, of which he served four years and four months before being released, the source said.

“Rabgye’s mother fell ill and passed away only two-and-a-half months into his sentence, and he could not see her before she died,” he said.

“Yonten Rabgye is an ordinary nomad who gets along well with others and is known as a well-mannered person in his community,” the source said.

But now, with a Chinese national campaign against “black and evil forces” in full swing in Tibetan areas, family members and friends in the community are finding it “inconvenient” to openly celebrate Rabgye’s release, he added.

Writing to RFA, another Tibetan source described Rabgye as a “man of action.”

“What Yonten Rabgye endured for so many years in prison was not because of some trivial personal matter, but because of his sincere love, loyalty, and patriotism for the Tibetan people,” the source said.