An activist known as a voice for angry young Tibetans is released but his movements are restricted.
2008-08-13
Tweet 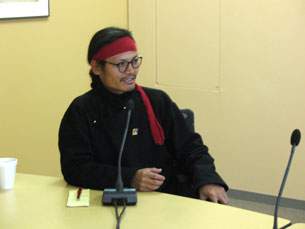 Police released Tenzin Tsundue on Aug. 11, after detaining him Aug. 2 in Mandi district jail in India’s northern Himachal Pradesh state. For four days, he staged a hunger strike and was then force-fed intravenously.

Tenzin Tsundue said he was taken to Forsyth Ganj police station in Dharamsala, seat of the Tibetan government-in-exile, and handed a notice telling him to stay there indefinitely.

“The conclusion of the Olympic Games in Beijing has no bearing on the length of my detention,” Tenzin Tsundue said in an interview, noting that the travel restriction could last much longer.

Tenzin Tsundue, who will now be tailed by two police officers at all times, said he had planned to enter Tibet specifically to protest.

“I came to Mandi to protest the Beijing Olympics and to fulfill a long-time wish of returning to Tibet,” he said. “I planned to return to Tibet using a secret route, but this time I didn’t succeed and have been forced to return to Dharamsala.”

Tenzin Tsundue said police detained him because he lacked official permission to travel outside of India—a regulation aimed at refugees based in India but rarely enforced.

“There is a clause associated with refugee status that requires an individual to report his travel intentions, but in the history of the program no Tibetan has ever been charged for failing to do so,” he said.

“In this case I was not only charged with omitting departure clearance, I was also jailed.”

India is home to some 130,000 Tibetans who have crossed into India to escape China’s heavy-handed rule in Tibet.

India has long given sanctuary to them and to Tibet’s exiled leader the Dalai Lama, but it also fears antagonizing its massive neighbor.

“This incident has reminded me that I am still without a country of my own because there is no freedom in Tibet and there are many restrictions we Tibetans face in India,” Tenzin Tsundue said.

“Still, I am never discouraged, because I always think about the Tibetans who are facing oppression and torture in Tibet,  and this gives me strength in my cause,” he added.

Tenzin Tsundue has a long history of peaceful but very public protest against Chinese rule in Tibet.

Born to exiled Tibetan parents in India, he is seen by many as a spokesman for a new generation of angry young Tibetans who have never lived in Tibet.

He was arrested earlier this year after leading a group calling itself the Tibetan People’s Uprising Movement on a three-month “March to Tibet” from Dharamsala to Dharchula, the last Indian township before the border.

In 2002, he unfurled a Tibetan national flag and banner reading “Free Tibet” after scaling the 14th floor of the Oberoi Towers Hotel in Mumbai during a speech by then Chinese Premier Zhu Rongji.

He staged another public protest in April 2005 during Chinese Prime Minister Wen Jiabao's visit to Bangalore.

Tenzin Tsundue has published essays and poems that seethe with anger and take bitter aim at popular conceptions of Tibetans as wholly peaceful and passive monks and nuns.

“We are refugees here./People of a lost country. Citizen to no nation,” he writes in a poem titled “Tibetanness.”

Another poem, “Betrayal,” conveys the inner conflict of many Tibetan exiles:

“My father died
defending our home,
our village, our country.
I too wanted to fight.
But we are Buddhist.
People say we should be
Peaceful and Non-Violent.
So I forgive our enemy.
But sometimes I feel
I betrayed my father.”