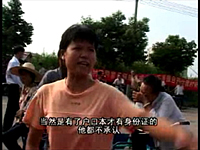 An arrest as villagers criticize their leaders in Taishi Village, Guangdong Province. (Still photo from the video © ; RFA)

HONG KONG—In September 2005, Taishi village in Guangdong province was the scene of police beatings and the arrest of dozens of villagers who had been petitioning since July for the dismissal of their elected village chief.

In the first video — ; shot by a villager and provided to RFA — ; Lu Banglie, an elected representative from a neighboring village, is arrested.

In the second video, villagers argue that their officials are corrupt and protect only their own. "I doubt if they are real Communists. They don't even recognize our ID cards."