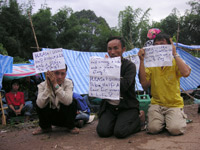 Hmong refugees appeal to the United Nations to treat them as political asylum seekers. Photo: RFA.

The 29 Hmong, arrested on Nov. 28, are among more than 6,000 Lao Hmong asylum-seekers sheltering in Huay Nam Khao, local sources told RFA’s Lao service. They are the first of the group to be arrested, they said.

“These Hmong people who were arrested and sent to Nongkhai province are Hmong Lao from Laos,” one Hmong man said on condition of anonymity.

“They lived in Huay Nam Khao village. They were arrested Nov. 28. The 29 arrested Hmong were held in Khao Kho district [in Phetchabun province] for about seven days and then sent to Nongkhai province.”

These Hmong people who were arrested and sent to Nongkhai province are Hmong Lao from Laos.

Police in Nongkhai province confirmed the arrest of more than 20 Lao Hmong and said they waiting for the appropriate time to send them back. The group was detained after leaving the restricted zone designated for the Lao Hmong, police said.

Earlier this year, the Thai government told landlords here they had until July 10 to evict the Hmong from their bamboo shelters, local sources said.

Landlords were threatened with imprisonment or fines up to U.S. $1,200 for sheltering the Hmong, whom Bangkok regards as illegal economic migrants.

The charges against them are illegal entry into Thailand and “wandering out of the confined area,” a Lao source said, adding, “They had to go out for work and food. They range in age from 10 to 25 years.”

What will happen to the group remains unclear, however, as the Thai National Security Council considers these Hmong illegal migrants who must go home, and Laos insists that no Hmong-Lao remain in Thailand since a U.N. program to repatriate Lao Hmong ended in the 1990s.

The Hmong say they will be persecuted by the communist Lao government if they are repatriated because of their Vietnam War-era ties with the United States.

Many Hmong fought under CIA advisers during a so-called “secret war” against communist insurgents in Laos.

In May, a refugee camp for ethnic Hmong in central Thailand was closed in what was hoped to be the last major movement of Hmong refugees.

Some 10,000 Hmong were relocated to the United States, with another 5,300 expected to resettle there by September, but U.S. officials say they have ruled out more mass resettlements.