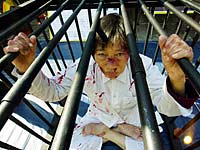 WASHINGTON—The United States slammed East Asian regimes in its annual report on human rights around the world, saying Chinese abuses remain a top concern of the American government and pledging “intensive efforts” to promote freedom in all countries.

“China’s human rights conduct remains one of the top concerns of the U.S. government,” Undersecretary of State for Global Affairs Paula Dobriansky told a briefing here. “Throughout China, and notably in Tibet, affronts to the dignity of human life abound. In North Korea and Burma, citizens languish under repressive regimes which do not govern for their people but rather against them.”

Washington’s message to citizens of repressive countries is “You are not ignored, and you are not forgotten. Furthermore, we will not excuse those who are responsible for your oppression,’” Dobriansky said.

“The months ahead will see intensive efforts by this administration to advance the president’s bold agenda to support the growth of democratic movements and institutions in every nation and culture,” she added.

China’s human rights record for 2004 “remained poor, and the government continued to commit numerous and serious abuses,” the report said. “The government maintained tight restrictions on freedom of speech and of the press, and a wave of detentions late in the year signaled a new campaign targeting prominent writers and political commentators,” the report said.

It added, however, that “the scope of permissible private speech continued to expand. Controversial political topics could be discussed privately and in small groups without punishment, so long as the speaker did not publish controversial views or disseminate them to overseas audiences. “

Abuses included extrajudicial killings; torture and mistreatment of prisoners, leading to numerous deaths in custody; coerced confessions; arbitrary arrest and detention; and incommunicado detention, the report said. “The judiciary was not independent, and the lack of due process remained a serious problem.”

“Authorities were quick to suppress religious, political, and social groups that they perceived as threatening to government authority or national stability, especially before sensitive dates such as the 15th anniversary of the 1989 Tiananmen massacre and other significant political and religious occasions. However, the Constitution was amended to mention human rights for the first time,” it said.

The lack of due process was “particularly egregious” in capital cases, with defendants often denied a meaningful appeal and executions often occurring on the day of conviction or on the denial of an appeal, it said.

Hundreds of followers of the outlawed Falun Gong movement have reportedly died in detention after torture, abuse, and neglect since a crackdown on the group began in 1999, it said, adding that “some groups based abroad estimated that as many as 2,000 Falun Gong practitioners have died as a result of official persecution.”

Terror a pretext for Xinjiang crackdown

In the Xinjiang Uyghur Autonomous Region, Beijing “used the international war on terror as a pretext for cracking down harshly on suspected Uyghur separatists expressing peaceful political dissent and on independent Muslim religious leaders.”

Trials and executions of Uyghurs charged with separatism continued, “and government pressure still made it difficult for lawyers to represent criminal defendants,” it said.

“The campaign against separatism in Xinjiang specifically targeted the ‘three evils’ of extremism, splittism, and terrorism as the major threats to Xinjiang's social stability.”

“Because authorities in Xinjiang regularly failed to distinguish carefully among those involved in peaceful activities in support of independence, ‘illegal’ religious activities, and violent terrorism, it was often difficult to determine whether particular raids, detentions, arrests, or judicial punishments targeted those seeking to worship, those peacefully seeking political goals, or those engaged in violence,” it said.

Uyghurs were handed long prison terms and sometimes executed in 2004 on charges of separatism, the report said.

“During the strike-hard campaign, which officially concluded in 2003, authorities stated they prosecuted more than 3,000 cases in Xinjiang and held mass sentencing rallies attended by more than 300,000 persons,” it added. “Other Uyghurs whose work emphasized pride in cultural identity have also been harassed and detained by the government,”

In the Tibetan Autonomous Region (TAR), human rights abuses were also extensive, the report said. “However, in positive developments, the Government permitted a third visit to the country by the Dalai Lama's representatives and released some political prisoners, including Tibetan Buddhist nun Phuntsog Nyidrol,” the report said.

“The government controlled information about all Tibetan areas, and in addition, strictly controlled access to the TAR, making it difficult to determine accurately the scope of human rights abuses. Authorities continued to commit serious human rights abuses, including extra-judicial killing, torture, arbitrary arrest, detention without public trial, and lengthy detention of Tibetans for peacefully expressing their political or religious views. The overall level of repression of religious freedom in the TAR remained high.”

Detainees freed in 2003 reported credibly that officials used electric shocks, prolonged periods of solitary confinement, incommunicado detention beatings, and other forms of abuse, while some said relatives were pressured for bribes to secure their release.

In the Hong Kong Special Administrative Region (SAR), conditions were relatively better, although Hong Kong’s autonomy under the “one country, two systems” formula in effect since 1997 “has been tested severely this year,” it said.

“The government generally respected the human rights of residents, and the law and judiciary provided effective means of dealing with individual instances of abuse,” the report said.

“The law provides for freedom of speech and of the press, and the government generally respected these rights in practice. During the year, allegations of intimidation by pro-Beijing groups and individuals prior to the September elections raised questions about these rights. Most Hong Kong media outlets are owned by businesses with interests on the mainland, making them vulnerable to self-censorship.”

Freedoms of speech, press, assembly, association, and movement were severely restricted, with foreign radio broadcasts still a crucial means for Burmese nationals to get information, it said. Buddhism as a state-sponsored religion was often coercively imposed on religious minorities, with Muslims in particular singled out for persecution.

In the ethnically troubled Karen State, the Burmese government army “continued to commit abuses, including beatings, rape, forced mine clearing, and forced labor, against villagers in Karen State and Tanintharyi Division,” in spite of ceasefire negotiations, the report said.

In Cambodia, which has seen more than two years of political turmoil following elections in July 2004, non-governmental organizations estimated at least four political killings in 2004, with a possible three more, although precise motivation for murders was not always clear, the report said.

“Military and police personnel were responsible for both political and nonpolitical killings; however, there was no credible evidence that these killings were officially sanctioned,” it said.

Cambodian justice suffered from a weak judicial system, with lack of education and corruption frequently prejudicing defendants' chances of a fair trial, it said.

During the year, credible NGO reports indicated that members of the military, military police, and civilian police forces were implicated in 66 cases of extrajudicial killings, with only 5 percent of cases resulting in prosecution, the report said.

It pointed to continuing failure to protect human rights in the areas of human-trafficking—especially of children—for the sex trade, and from unexploded land-mines left over from decades of war.

Freedom of press and information, while much greater than for some of Cambodia's neighbors, could still be severely compromised under vague national security legislation.

It also cited the shooting of union leader Chea Vichea, gunned down on a street in Phnom Penh in January 2004 as an example of official intolerance towards labor unions and workers' rights activists. Chea Vichea's death was followed by that of Ros Savannareth and Lay Sophead, and by several threats to many other labor activists, it said.

Horrors of the North Korean gulag

In Stalinist North Korea, reports continued to emerge of extrajudicial killings, disappearances, and arbitrary detention, including of many persons held as political prisoners, the report said. Torture was common, with stories emerging of pregnant female prisoners undergoing forced abortions, and babies reportedly killed on birth in prisons.

“Citizens were denied freedom of speech, the press, assembly, and association; all forms of cultural and media activities were under the tight control of the [ruling party],” it said.

Information, freedom of religion, citizens' movement, and worker rights were all suppressed, with the United Nations Special Rapporteur on human rights Vitit Muntarbhorn barred from visiting North Korea to carry out his mandate, the report said.

“There were widespread reports of trafficking in women and girls among refugees and workers crossing the border into China. Only government-controlled labor unions are permitted,” the report said.

The Pyongyang regime's view was that most international human rights norms, particularly individual rights, were illegitimate, alien, and subversive to the goals of the State and Party.

Citizens of Laos, meanwhile, were subject to arbitary detentions, torture, and harsh prison conditions, as the government pursued those suspected of insurgent or anti-government activity, the report said.

"The judiciary was subject to executive, legislative, and [ruling party] influence, was corrupt, and did not ensure citizens due process. The government infringed on citizens' privacy rights and restricted freedom of speech, the press, assembly, and association," it said.

Authorities also restricted freedom of religion, and police and provincial authorities arrested and detained approximately 30 Christians, although most of them were released after short periods of detention.

Three members of religious communities were in custody or under arrest for their religious beliefs at the end of 2004, while ethnic minority Protestants were expelled from villages if they refused to renounce their faith.

In Vietnam, ethnic unrest also sparked rights abuses by the authorities in the Central Highlands area, where police beat and fired on club-wielding and stone-throwing protesters in April 2004.

"Reports ... suggested that many protestors were killed by police, or fled into the jungle where some died from their wounds, afraid to seek medical treatment," the report said, citing reports that the number of those killed was at least in double digits, and might be much higher.

It pointed to the cases of political prisoners, including pro-democracy activist Nguyen Dan Que, convicted of "abusing democratic freedoms to infringe upon the interests of the State" and sentenced to 30 months' imprisonment in July, and the closed trials of journalists and political activists in the previous year on "spying" charges.

At least nine prisoners were known to be held in Vietnam for political reasons and 22 prisoners reportedly held for religious reasons.

“The government's human rights record remained poor, and it continued to commit serious abuses," the report said, including denying Vietnamese citizens the right to change their government.

While authorities took steps to combat trafficking in persons, trafficking in women and children for the purpose of forced prostitution within the country and abroad continued to be a problem, and there were reports of the trafficking of women to China and Taiwan for forced marriages.

While some core worker rights, such as freedom of association, were restricted, the authorities had also cooperated with international groups to improve implementation of the labor law. The government had also recognized child labor as a problem and attempted to address it, it said.