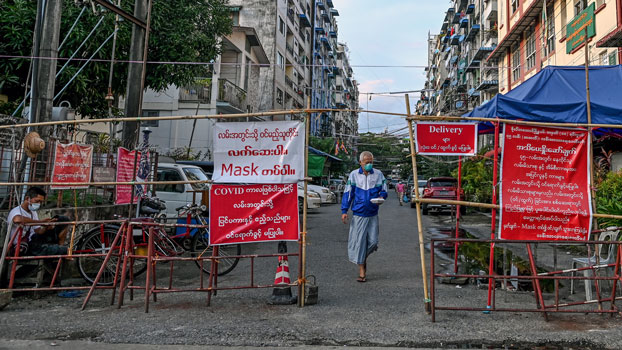 A man approaches a barrier blocking access to minor roads next to a sign recommending that residents to stay at home amid the COVID-19 pandemic in Myanmar's commercial hub Yangon, Sept. 26, 2020.
AFP

On Monday, Myanmar recorded 11,631 confirmed coronavirus cases, including nearly 900 new infections, with 256 deaths, according to the Ministry of Health and Sports.

The figure included more than 7,700 cases since mid-August in the region of Yangon, the country’s commercial hub and largest city, and over 1,300 reported cases and three fatalities in Rakhine state in Myanmar’s far west, which has been a theater of war since January 2019.

The Yangon region on Sunday deployed firefighters, police, and local administrators to inspect drivers and passengers at road checkpoints and enforce COVID-related restrictions that ban people other than essential workers from traveling between townships without official permission.

“People are not allowed to travel from one place to another for health and safety reasons,” said Sergeant Soe Lin Aung, a firefighter stationed at the Aung Myay Thasi housing complex in Yangon’s Kamayut township.

Only residents who intend to visit a hospital or a clinic outside their townships will be allowed to leave the area after obtaining a letter of approval from the local administration office, he said.

If residents leave their townships without official approval, they can be jailed for one to six months, Soe Lin Aung said.

The latest measure follows stay-at-home orders issued on Sept. 11 across Yangon region, lockdowns in 28 townships in downtown Yangon city, the shutdown of garment factories until Oct. 7, and an order for employees at other businesses to work from home.

Some streets in Yangon remain blocked by barriers to keep out both cars and people as a further preventive measure.

The Yangon City Development Committee (YCDC), the administrative body of the commercial hub, is struggling with a shortage of trash collectors, after several came down with the coronavirus.

Health care workers, meanwhile, have expressed fear that the improper disposal of medical waste from COVID-19 testing and treatment could make a bad situation worse in the country’s most populous city.

“The YCDC has a major challenge with regard to the garbage collection system because we have a very limited number of staffers for trash pickup and cleaning in quarantine centers and hospitals,” said YCDC member Than Myint Aung.

“We are already understaffed, and now some of them have tested positive,” she added. “Some of them have been asked to quarantine at home, so our capacity has been eroded.”

Health care workers and activists in Yangon were alarmed after seeing a recent viral Facebook post of a man removing a used medical hazmat suit from a roadside trash bin, underscoring the need for the systematic disposal of used personal protective equipment (PPE).

“We saw the photo on Facebook of a person taking a level-3 grade PPE suit from the garbage, possibly for reuse,” said Dr. Myat Min Oo, a medical practitioner from the Mayangone Township Fever Clinic. “It really shocked me.”

The YCDC has procedures in place to burn PPE used by those who clean the outside of quarantine facilities, but it must rely on volunteers for the internal cleaning, Than Myint Aung said.

“Those who transport the garbage cannot go home after work. They need to be quarantined,” she said.

“We have to fill in the gaps with volunteers. We are struggling to keep the system functioning,” she added. 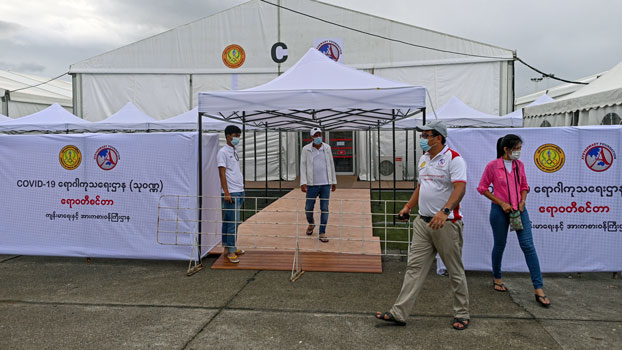 'Exhausting all the resources'

In far western Myanmar, near the country’s border with Bangladesh, the number of internally displaced persons (IDPs) from the war in Rakhine state has shot up in recent weeks by 20,000 to a total of more than 220,000, according to an estimate by the Rakhine Ethnics Congress, a local NGO.

Doctors and aid workers say the armed conflict is hindering efforts to contain the coronavirus as more civilians flee their homes and take refuge in crowded displacement camps where social distancing is impossible.

Many people who are fleeing their homes are weak from a lack of sleep, food, information about COVID prevention, and PPE, said Zaw Zaw Tun, secretary of the Arakan Humanitarian Coordination Team, a network of civil society groups.

The latest IDPs fled to nearby villages and towns to escape offensives and the burning of villages in Rathedaung and Kyauktaw townships, where several coronavirus-positive patients have been recorded.

The IDPs are “crowding in IDP camps and in monasteries, and not following stay-at-home orders,” said Dr. Aung Naing Lin, a specialist at Sittwe General Hospital in the state capital.

“They are not in a position to comply with rules like wearing face masks, frequent hand-washing, or social distancing,” he said. “If one of them gets infected, it will lead mass infections.”

“We are exhausting all the resources to contain this disease,” Aung Naing Lin added.

On Sept. 23 alone, more than 2,000 local villagers from the Moe Sae Kyun area fled the fighting and went to Sittwe and other towns.

“Sittwe is now a hotspot for the COVID-19 pandemic, though it is the safest place for IDPs now,” said Dr. Tin Myint Oo, a doctor from Rathedaung township. “So, there are more chances that they will become infected with COVID-19.”

Nyein Chan, a resident of Shwe Laung Tin village who fled to Sittwe, said there have been fewer deaths from COVID-19 than from the shelling of civilian communities in northern Rakhine state.

“The shelling blasts will kill everyone, so we are more afraid of artillery blasts than we are of COVID,” he said. “This is why we are taking shelter in Sittwe.”

Many villagers say that Myanmar forces have targeted civilian areas even when they are not engaged in a clash with rebel Arakan Army (AA) soldiers. Nearly 300 civilians have died amid the conflict, and more than 640 have been injured.

“The ongoing armed conflict in Rakhine state has been caused by the military’s offensives with all-out army, navy, and air force power,” he said.

“Even during the pandemic, the Myanmar military hasn’t stopped burning Rakhine villages, while its navy vessels have fired upon villages along the Kaladan, Mayu, and Laymyo rivers, killing several [civilians].”

Myanmar military spokesman Major Gen Zaw Min Tin said at a news conference on Sept. 26 that soldiers only fire back when the AA fires on them.

“There have been many incidents where AA troops have fired on the patrolling navy vessels, and men in plainclothes have ambushed military troops,” he said.

Reported and translated by RFA’s Myanmar Service. Written in English by Roseanne Gerin.