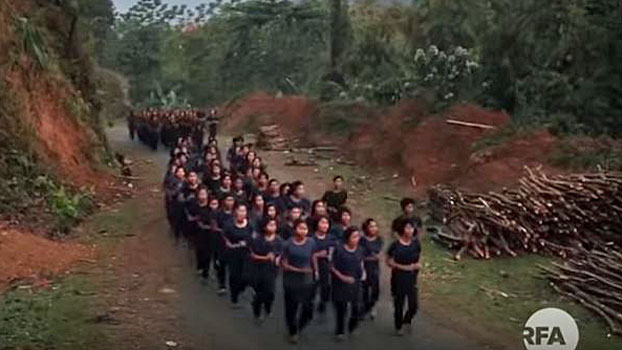 The Arakan Army, which is battling the Myanmar military for autonomy in turbulent Rakhine state, has grown in both force strength and firepower since its formation in 2009 to the level that the rebel group can now launch successful offensives on police or military outposts. And its message is drawing as many young female recruits as men.

After hundreds of Arakan fighters carried out deadly attacks on police outposts in northern Rakhine in early January, striking on Myanmar's Independence Day, hostilities between the two sides escalated, prompting the government to brand the Arakan Army, commonly referred to as the AA, a terrorist group and to order its troops to eliminate it.

So far this year, the AA and Myanmar forces have engaged in more than 100 battles in Rakhine state.

The AA, which draws most of its recruits from ethnic Rakhine Buddhists who support its mission, has trained with the Kachin Independence Army (KIA), another ethnic armed group that has fought government forces in Kachin and northern Shan states, at KIA headquarters in the remote mountainous town of Laiza, with AA soldiers playing a supporting role in those regions.

The AA engaged in its first real clash with Myanmar Army troops in March 2015 near Rakhine’s Kyauktaw township. It was one of three ethnic armies excluded from the government’s nationwide cease-fire agreement (NCA), which eight ethnic organizations signed, later that year.

Ethnic armies are known to exaggerate their member numbers, and AA leaders have refused to divulge the exact number of soldiers in its ranks. A January report on women in ethnic armies by the Norway-based Peace Research Institute Oslo (PRIO), however, put the total number of both male and female AA troops at 1,000, while another report published the same month by the online journal The Irrawaddy put it at 7,000.

Like the national military and other ethnic armies in Myanmar, the AA is focusing its recruitment efforts on signing up young women to fortify its ranks and prepare them for future combat to fulfill the AA’s mission of self-determination for ethnic Rakhine people in Rakhine state.

There are now as many young women as there are male recruits training at a military facility in Laiza in northern Myanmar’s Kachin state near the border with China, signaling growing support for the rebel army among Rakhine civilians as the conflict intensifies.

Most of the young women training there are about 20 years old. RFA’s Myanmar Service has given them aliases because they declined to be identified by name while speaking on the record during a recent reporting trip to Kachin state, citing security and other reasons.

The female soldiers say they have been motivated to join the AA by the rebel force’s credo that armed revolution is the only way to achieve ethnic Rakhines’ goals of self-governance, self-determination, and equality in their state.

“We want self-governance,” said female recruit Hla Hla Kwye. “We can address our problems and decide what we need only when we have self-governance and self-determination. Now, it is all messed up since we are governed by others. We are discriminated against as if we are parented by a stepfather or a stepmother.”

She said she wants to deliver the “gift of independence” to her fellow ethnic Rakhines before 2020, so that they will no longer be “oppressed.”

“They will no longer be a second-class ethnic group,” Hla Hla Kwye said.

Others said they decided to join the AA to fight the ethnic-based discrimination and unfairness they face from the ethnic Bamar majority that dominates the national military and the country’s ruling, civilian-led National League for Democracy (NLD) government.

Myo Myo Thet, a female recruit who has been stationed at AA headquarters since 2018, said this unfairness has been evident in the extraction of natural resources in Rakhine state.

“When we interacted with the environment, we came to realize that we only got unfair shares of profits from natural resources extracted from our own state,” she said. “So, I learned that an armed revolution is unavoidable in order to achieve a Rakhine Nation. I then pledged to become a female Rakhine soldier.”

Many ethnic Rakhines believe they have been sold short on benefits they should have received as part of the central government’s natural resources and infrastructure deals with Myanmar’s larger neighbors China and India — namely, dual pipelines that export their state’s oil and natural gas to China and a massive transportation corridor to ship cargo from India to Rakhine’s Sittwe seaport and then on to northeast India via river and highway routes.

Other female recruits said they have been motivated to join the AA by more practical reasons, namely lack of employment opportunities — especially for women — in the impoverished and underdeveloped state.

“Before, I liked to make myself look beautiful,” said recruit Soe Soe. “I liked to eat a lot and sleep a lot. I didn’t have any employment either. We had to go to Yangon to get a job. There are no job opportunities in Rakhine state. We only have chores like cooking and carrying water.”

After she joined the AA, Moe Moe found a job and learned how to make better use of her free time.

Training female soldiers takes two months, during which time they are also required to learn skills such as office administration, management, accounting, and sewing.

Though she’s proud of her work with the AA, Soe Soe said she is ready to return home to be with her family.

“I want to go home,” she said. “But although I’m separated from my whole family, I’m proud that I’m now working for the sake of the entire Rakhine state.” 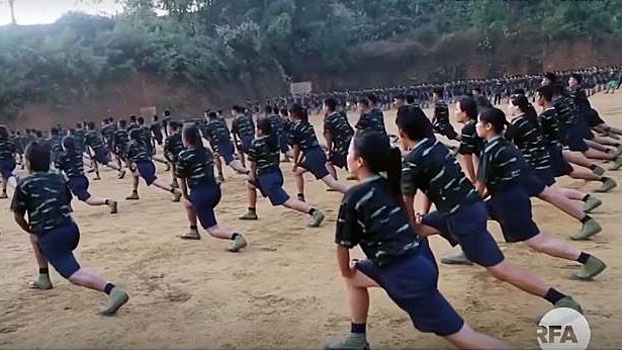 Some political analysts in Myanmar questioned why female soldiers want to get involved in armed conflict.

Retired military officer Aung Myo said Rakhine state’s problems do not stem from inequality between the Bamar majority and ethnic minorities or from racism, but have been created by the centralized administrative system practiced by successive governments.

“The ethnic minorities think they are being discriminated against, [and] they feel that they are victims of racial supremacy,” he said.

“I don’t want to judge whether their narrative is right or wrong because it is so broad,” he said. “But what we can’t disagree on is that the problems stem from the resistance to decentralization and suppression of the ethnic states’ autonomy, which have not changed up to today.”

Author Mi Sue Pwint, a member of the Women’s League of Burma, a community-based organization promoting women’s rights and participation in Myanmar politics and its peace process, said that although female soldiers are receiving necessary combat training, they may not be getting training in negotiation skills that members of armed groups need to participate in political discussions.

“They are all using the women to showcase their strength, but the real question here is how well the women are prepared and trained for political engagement,” she said, adding that the success of a democratic society, such as the one Myanmar is striving to build, will be judged in part by the extent of women’s political power.

Myanmar’s peace process, in which the national military and ethnic armed organizations are key stakeholders, is a fundamental part of the country’s transition to democracy that began in 2011. Both sides must be able to engage constructively in talks to address political problems that are the root causes of the country’s warfare in an effort to end decades of armed conflict and forge peace and stability.

“Political negotiations are the next step we need to go through,” said Mi Su Pwint, a former soldier with the All Burma Students’ Democratic Front (ABSDF), an opposition group founded in 1988 after a series of nationwide popular pro-democracy protests and civil unrest.

“Only after we pass that step will we be able to achieve the goal of a federal union that guarantees equality among all ethnic groups,” she said.

Those involved in the peace process have an agreed-on target that women should account for 30 percent of representatives, though the actual number of female negotiators is much lower. Because women are not well represented in ethnic armed organizations, they are not offered attractive leadership positions, and the roles available to them are marginal, PRIO said it its report.

The current trend of recruiting female soldiers primarily serves propaganda purposes rather than practical ones, Mi Su Pwint said, noting that ethnic Karen, Kachin, and Wa armed groups as well as the Myanmar military have been recruiting more women in recent years.

“In military parades such as the one on Armed Forces Day, female troops are shown as the highlight, Mi Su Pwint said. “Thus, the ethnic armed groups are doing the same thing, showcasing their own women troops at their anniversary occasions.”

“The AA has been trying to grow its base, [and] it has its own political ambitions, so I have no doubt that the AA’s public campaign policy would focus on recruiting young females because their target is within the Rakhine population,” she said.

“Once young, educated, female Rakhines join them, it will be easier for them to persuade more people,” she said.

Aung Myo pointed to a downside of the AA’s efforts to recruit young women, saying that their involvement with the rebel force bodes ill for civilian women in Rakhine state.

“In the battles, they will not be spared because they are female,” he said. “They will be treated as enemies.”

“But the impact goes beyond the realm of real female soldiers,” he said. “Now, all women in Rakhine state will be viewed with suspicion as potential informers, AA members, or [AA] supporters. This is a completely wrong move because it drags the entire population of Rakhine women into the armed conflict.”