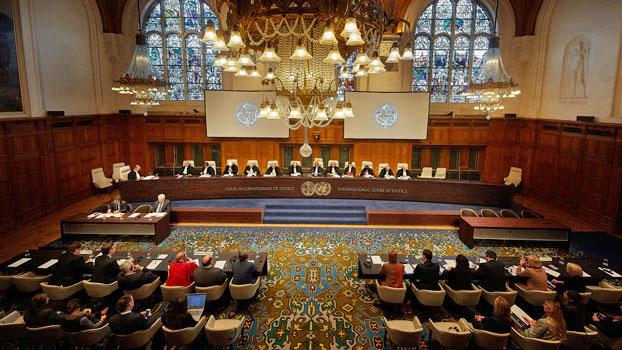 Judges of the International Court of Justice read a judgment at a hearing in The Hague, the Netherlands, Nov. 8, 2019.
Photo courtesy of the ICJ

The U.N.’s top court will open hearings in December on a case filed by Gambia accusing Myanmar of state-sponsored genocide for the brutal military-led crackdown against Rohingya Muslims, the court said Monday in a statement.

The International Court of Justice (ICJ) based in The Hague, the Netherlands, will hold the public hearings on Dec. 10-12.

Gambia, a predominantly Muslim African country, instituted proceedings against Buddhist-majority Myanmar before the ICJ on Nov. 11, alleging violations of the Convention on the Prevention and Punishment of the Crime of Genocide through “acts adopted, taken, and condoned by the Government of Myanmar against members of the Rohingya group.”

Gambia has also called for urgent provisional measures “to stop Myanmar’s genocidal conduct immediately” to prevent further harm to the Rohingya while the case is pending.

Myanmar security forces targeted Rohingya communities in northern Rakhine state during the 2017 crackdown with indiscriminate killings, mass rape, torture, and village burnings. The violence left thousands dead and drove more than 740,000 others across the border and into Bangladesh where they live in sprawling displacement camps.

The Myanmar government has justified the crackdown as a necessary counterinsurgency against Muslim militants who conducted deadly attacks on police outposts.

“We expected that they would take legal action against us at the ICJ,” said Myo Nyunt, spokesman for the ruling National League for Democracy (NLD) party, in response to the ICJ’s announcement about the hearing dates.

“We have already prepared to defend ourselves legally,” he said, adding that the main task will be proving that the “genocide” or “ethnic cleansing” mentioned in their accusations never actually happened.

“Most of their evidence on these accusations are the satellite photos,” Myo Nyunt said, referring to images of Rohingya communities burned to the ground in northern Rakhine state.

“We don’t deny these incidents happened, but with regard to who actually did that, it needs to be proven,” he said.

Myanmar has maintained that the Rohingya torched their own communities during the campaign of violence.

Aye Lwin, a Muslim leader in Myanmar who was a member of a commission headed by former U.N. chief Kofi Annan that called for an end to restrictions on the Rohingya minority to prevent further violence in Rakhine state, said the rights violations that occurred during the crackdown must still be credibly investigated.

“There are incidents that need thorough investigations, and authorities are launching one investigation after another,” he said, referring to probes initiated by the government and the military that have largely been ineffectual, except for one that resulted in a court-martial.

“They will acknowledge that the incidents happened, highlight their actions to investigate, and show their intentions to punish those who are responsible,” he said.

‘We cannot run away from it’

Members of other political parties weighed in on the issue.

Nandar Hla Myint, spokesman of the opposition Union Solidarity and Development Party (USDP) said the issue is an internal one in which the international community should not meddle.

“The previous government firmly stated that it is a domestic issue and should not be made into an international one,” he said, referring to the administration of former President Thein Sein of the military-backed USDP, during whose tenure in office occurred communal violence between Buddhists and Muslims in Rakhine state that left more than 200 dead and displaced roughly 120,000 Rohingya who were later housed in camps.

“We will not accept interference in our domestic issues based on a dishonest agenda,” he said.

Oo Hla Saw, an Arakan National Party lawmaker who represents Mrauk-U township in the Rakhine state parliament, said that as an ethnic Rakhine, he is concerned about how the case will play out in court.

“Taking on this one will be very challenging since we know they have come up with an agenda,” he said. “We have to face it anyway. We cannot run away from it.”

“The target of their prosecution includes the military, the government, and the whole nation,” he said. “It requires a solid understanding between the military commander-in-chief and the state counselor [Aung San Suu Kyi] to take this on.”

Tate Naing, co-founder and secretary of the Assistance Association for Political Prisoners (Burma), said that despite the ICJ case, the Myanmar government should focus on rebuilding Rohingya communities in northern Rakhine that were destroyed during the 2017 crackdown.

“It is hard to identify the source of this issue,” he said. “It has stemmed from years of mistreatment [of the Rohingya]. Whatever the cause is, hundreds of thousands of people have fled their homes for now. In a time like this, the government should focus on restoring their original condition instead of finding the sources of the problem.”

Myanmar military spokesmen were not available for immediate comment.

Gambia filed the case on behalf of the Organization of Islamic Cooperation, an international organization consisting of 57 Muslim member states.

Separate cases pertaining to the persecution of the Rohingya have been filed at the International Criminal Court in The Hague and in an Argentine court, the latter of which names Myanmar leader Aung San Suu Kyi, President Win Myint, former presidents Thein Sein and Htin Kyaw, and top military brass deemed responsible for the atrocities.