The plight of 2,200 political detainees languishing in Burma's jails is highlighted to the Red Cross.
2010-12-21
Tweet 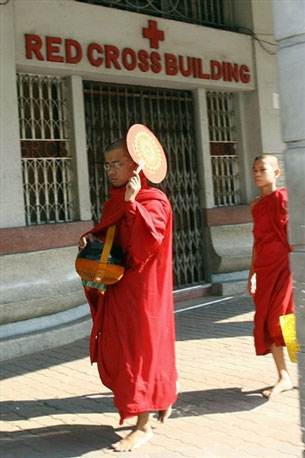 "She requested for more support and help from the ICRC at the meeting," her spokesman Nyen Win said after the talks.

Political detainees in Burma have not received visits by ICRC staff aimed at monitoring their treatment and living conditions since December 2005 after the ruling military junta disallowed the organization from carrying out duties "in accordance with its standard working procedures."

But the ICRC continues to support family visits to political detainees, who according to rights groups face torture and various other human rights abuses and are held in harsh conditions with little or no access to health care.

"The ICRC spoke to Aung San Suu Kyi about the difficulties they are facing," Nyen Win said.

A key problem is that families of political prisoners have to travel long distances to meet their loved ones, he said.

Many of the political prisoners are housed in the Insein, Mandalay, and Thayawaddy prisons. Others are spread out among the 44 prisons in the country.

"Some families live in Rangoon [Burma's former capital], but they have to travel far to the south to visit detainees, putting a heavy burden on them especially in terms of travel costs," Nyen Win said. 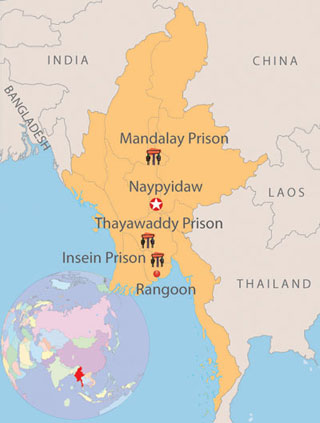 Map showing prisons where many of Burma's political prisoners are locked up. RFA

Aung San Suu Kyi and the ICRC officials talked about the possibility of raising funds to cover the high travel costs incurred by families of detainees.

He said "many" of the prisoners are "suffering serious health problems from the harsh conditions of their detention.”

Quintana made the appeal following the Dec. 8 death of a 50-year-old Buddhist monk in captivity.

The monk, U Naymeinda, was arrested for distributing leaflets supporting a pro-democracy demonstration in 1999 and was sentenced to 20 years in prison. He died after being trasferred to Moulmein prison, far from his family, according to Quintana.

The Assistance Association for Political Prisoners (AAPP), a Burmese rights group, charged that the junta's practice of transferring political prisoners to jails across Burma makes it "very difficult for their loved ones to visit and provide essential food and medicines."

"The most high-profile activists have been transferred to the most remote prisons, which is a new psychological strategy by the regime designed to cut them off from their family support system," it said.

In previous years, the most high-profile political prisoners were held under tight security in Rangoon’s notorious Insein prison.

"The release of Daw Aung San Suu Kyi is not enough. The military regime must now release all political prisoners immediately and unconditionally," said Bo Kyi, AAPP's joint secretary, said in a statement after the 65-year-old Nobel laureate was freed from house arrest on Nov. 13.

Aung Din, the executive secretary of the U.S. Campaign for Burma, said the ICRC should be allowed to visit prisons and talk to the detainees to gauge the level of treatment they receive and said that authorities should take steps to address the issues highlighted by them.

"Only then can they determine the abuses committed at the prisons and take steps to end them," said Aung Din, himself once a political prisoner who underwent torture in jail.

He also lamented on the difficulties faced by families of political detainees.

"Some of them had to travel three to four days to visit their loved ones," he said.

Aung Din said that local authorities also pressure the owners of hotels not to house families who travel from out of town to visit political prisoners.