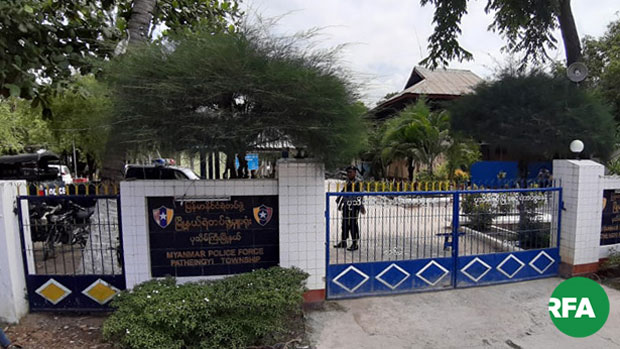 The Patheingyi township police station is shown in a June 12, 2019 photo.
RFA

A police officer in central Myanmar’s Mandalay region was found dead in his home Wednesday morning after being questioned in the case of a jailed protester who died in custody early this month, sources said.

Myo Nyunt Than, a major in the Patheingyi township police force, had been shot and was found lying on the floor of his bedroom behind closed doors, Ye Min Oo—a township representative to the regional parliament—told RFA’s Myanmar Service.

“What I heard was that he shot himself in the mouth,” Ye Min Oo said. “But I can only confirm that this incident took place. I have no detailed information about it yet.”

Township police are now investigating the case with the help of officers from the Mandalay regional police force and members of the Criminal Investigation Department (CID), a local police officer told RFA, speaking on condition of anonymity.

CID officers had recently questioned Myo Nyunt Than in connection with the death in custody of Aungthabyae villager Tun Myint Win, who had been interrogated at the Patheingyi policy station before being sent to Mandalay’s Oh-boe prison, he said.

Arrested in connection with protests against the construction of a Chinese-backed cement factory in the Mandalay region, Tun Myint Win was taken by township police to Oh-boe prison on June 3, and was found dead on the morning of June 5, sources told RFA in earlier reports.

Speaking to RFA on June 6, prison warden Tun Tun said that Tun Myint Win had died of a fever and “appeared to have had a lot to drink” before being transferred to his custody by police.

But before returning the body to family members for cremation, prison authorities forced relatives and friends to sign a pledge not to raise a fuss over wounds seen on the body suggesting the man was killed in jail, sources said.

Lawyers have demanded an investigation into the protester’s death.

Around 20 people were injured on May 15 after police fired rubber bullets and tear gas into a crowd protesting construction work at the Alpha Cement Plant near Aungthabyae village in Kyaukse district’s Patheingyi township, sources told RFA in earlier reports.

The factory is operated as part of a joint venture between a local firm and a Chinese partner.

During the protest, villagers blocked factory vehicles and demanded compensation for land they say they lost when an 18-foot-wide road was built as part of the project. They also urged authorities to address what they said were problems caused by an influx of hundreds of Chinese employees working at the site.

Some demonstrators set four vehicles and part of the factory property on fire, a village resident said.

Though a heavy police presence restored calm to the area near the plant by the evening of May 15, villagers demanded that the project to update the plant’s cement production capacity be scrapped and that those detained by police be released, sources said.