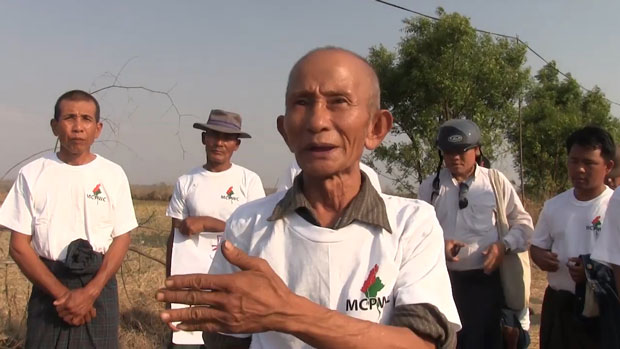 Burmese farmers barred for five years from planting crops along the route of a Chinese oil and gas line are protesting new requests by an affiliate of the pipeline company to take control of the adjoining land once restrictions end, sources in Myanmar say.

Completed in 2012, the pipeline built by the Chinese state-owned China National Petroleum Corporation (CNPC) and its Myanmar partner, runs from the port of Kyaukpyu in western Myanmar’s Rakhine state to China’s southern city of Kunming.

Farmers in Ngape village in Myanmar’s Magway division, through which the underground pipeline passes, have been barred since then from planting crops within 50 feet on either side of the line, but believed they would be allowed two years ago to plant again.

That date for the land’s return has now passed, however, with CNPC affiliate the SEAsia Oil Pipeline-SEAsia Gas Pipeline Co. now applying for exclusive use of the restricted zone, sources say.

“They agreed that we would receive compensation for the land and our crops for five years, but that we could later grow seasonal crops there for a living,” U Soe Thint, a local farmer protesting the Chinese company’s application to use the land, told RFA’s Myanmar Service this week.

“They only said that we can’t grow perennial crops or plant trees on the land or build permanent structures there. That was the agreement. But now they are trying to use that land for their own purposes,” he said.

Villagers protesting the Chinese company’s request also voiced security concerns, with one farmer saying that if China builds a railroad along the line, “many Chinese soldiers and laborers may be brought into the area.”

The company’s application for exclusive use of the land along the pipeline is their second request made since 2013, and was abandoned once before, RFA’s source, U Win Ko, said.

“Now they are trying again in 2018 and 2019,” he said. “Why are they doing this now after we have already stated our objections?”

“I would like to appeal to government authorities to stop them from trying this again,” he said.

'I have no answers'

Also speaking to RFA, U Thant Zin of the watchdog group “Follow,”one of several groups set up to monitor the Chinese pipeline project, echoed the farmers’ concerns.

“They are hoping to grow crops again, and this Chinese company is now applying for a permit for [exclusive] use of the land,” he said.

“This pipeline runs across the country. The compensations that were paid were very meager, and have not covered the losses resulting from different kinds of damage,” he said.

“One local farmer told me they are being sacrificed for the benefit of the country as a whole, and he asked me what the real benefits of hosting this pipeline are.”

“I have no answers.”

The pipeline dispute comes as Myanmar grapples with the fate of the Myitsone Dam, a U.S. $3.6 billion Chinese-backed hydropower project on the Irrawaddy River in Kachin state that was put on hold in 2011 amid heavy public opposition.

China has pressed Myanmar to carry on with the dam, part of its Belt and Road Initiative, $1-trillion plan to connect China with Silk Road trade routes through Asia and Africa to Western markets.

But opposition within Myanmar remains strong.

Reported by Zaw Too for RFA’s Myanmar Service. Translated by Ye Kaung Myint Maung. Written in English by Richard Finney.