Myanmar Top General Raises Questions With Visits to Mosques, Other Places of Worship 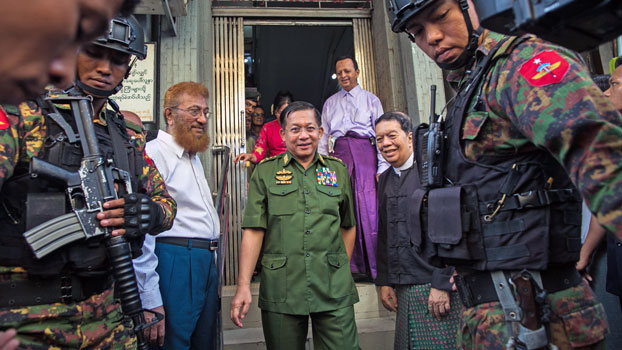 Visits to non-Buddhist religious venues by Myanmar’s military commander-in-chief, Senior General Min Aung Hlaing, accompanied by sizeable financial donations, have prompted observers to question his motives in the face of international condemnation for his role in widespread rights abuses by the army.

Min Aung Hlaing has recently visited a historic mosque, places of Christian worship, Hindu temples, and a Muslim hospital, donating massive amounts of money to them, leading some to believe that he is trying to improve relations with non-Buddhist groups to alleviate international pressure over the military’s attacks on Rohingya Muslims and other religious minorities.

“I think that could somewhat relate to international pressure and the [current] situation,” said Myanmar political analyst Yan Myo Thein.

“Anyone who wishes or prepares to become a president is not required to win in an election or through the election process, so it’s difficult to say that the commander-in-chief’s move is related to upcoming 2020 elections.”

On Aug. 25, Min Aung Hlaing visited a mosque in Pyinmana town in the capital Naypyidaw, believed to have been established by Myanmar-Muslim warriors some 300 years ago.

His visit came just four days after a United Nations fact-finding mission (FFM) called on the government military to end abuses against minorities in the country.

It also occurred on the second anniversary of a military-led crackdown on the Rohingya in Rakhine state, which prompted accusations of genocide by the FFM and calls for Min Aung Hlaing and others responsible for killings, rapes, and arson in Muslim villages to be brought before an international tribunal.

On Sept. 11, the military chief visited an historic mosque, a Catholic church, and the Masoeyein and Bhamo Buddhist monasteries.

Coinciding with a press conference six days later by the FFM and the U.N. special rapporteur on the human rights situation on Myanmar, Min Aung Hlaing visited the Zafar Shah mosque, a Muslim charitable hospital, Christian churches, and a Hindu temple, donating vast sums to each of them, according to the Myanmar military.

“The donations go where needed,” said army spokesman Brigadier General Zaw Min Tun. “Our country is now in need of political, social, and religious unity, so we have done what is needed in a time like this.”

Min Aung Hlaing also warned about the consequences of disunity, citing a Myanmar saying that “cows will become prey should they stray from a herd.”

The commander-in-chief previously faced criticism over the offering of alms to firebrand monk Wirathu known for his virulent anti-Muslim rhetoric, and who was a member of an ultranationalist Buddhist monk organization previously known as Ma Ba Tha.

The group, which renamed itself the Dhamma Parahita Foundation, has been declared an illegal organization by the Sangha Maha Nayaka (Mahana), a government-appointed council that oversees and regulates the Buddhist clergy in Myanmar.

Buddhist monk Ashin Ariya Wuntha from Mandalay said Min Aung Hlaing’s offerings of monetary donations to religious groups could be part of a publicity campaign to improve his image, but they have come too late.

“He is doing something right, but his efforts would have been more appreciated if he had done this earlier,” he said. “Now, the Ma Ba Tha group that he used to rely on [for support] has collapsed. We should question the genuineness of his actions toward Buddhism.”

“He could be using these donations for publicity,” the monk said. “The reopening of mosques could also be contributing to this. Yet, we welcome the actions anyway.”

Maung Maung Myint, spokesman for a new committee of Muslim leaders from throughout Myanmar, said the group’s campaign to reopen shuttered mosques nationwide was not an outcome of Min Aung Hlaing's recent visits to Islamic places of worship.

“They [Muslims] have been trying to reopen the mosques in their respective townships, but they cannot reach state leaders with their appeals, so that’s why we decided to form a group to survey the mosques and submit a collective appeal to leaders,” he said.

“We are aware of the commander-in-chief’s recent visits to the religious buildings and his donations,” he said. “We welcome that, but this effort is not because of his visit.”

Reported and translated by Nandar Chann for RFA’s Myanmar Service. Written in English by Roseanne Gerin.