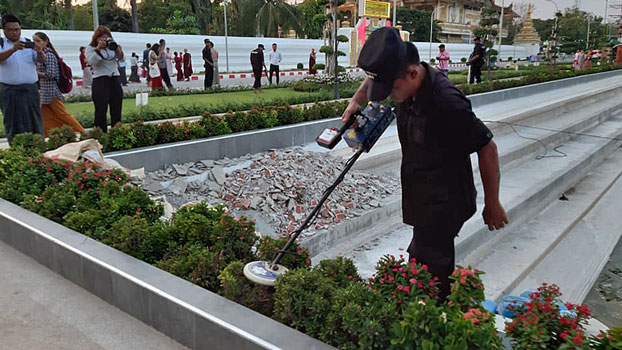 Bomb squad officers check for explosives near in a busy public space in the central Myanmar city of Mandalay, Sept. 26, 2019.
RFA

Another incident earlier this week involving a laser pointer aimed at Myanmar leader Aung San Suu Kyi has raised questions about the security of the nation's top officials.

The classified security memo issued by the President’s Office in mid-September identified Sept. 16, 26 and Oct. 16 as dates set by some ethnic armed groups for attacks in Naypyidaw, Yangon, and Mandalay, and instructed government offices to increase their safety measures.

The leaked letter, which circulated widely on social media, prompted warnings this week from the U.S. Embassy in Myanmar and other Western governments for their citizens to remain vigilant when traveling and to avoid Rakhine and northern Shan state where ethnic armies have been engaged in armed conflict with Myanmar forces.

The classified letter said that 20 members of four ethnic armies planned the attacks at a meeting in northern Thailand on Aug. 30.

The ethnic armies mentioned in the letter — the Arakan Army (AA), Kachin Independence Army (KIA), Chin National Front (CNF), and Karen National Union (KNU) — denied that they had discussed or planned any attacks.

Police Major Myo Thu Soe told RFA’s Myanmar Service that none of the foreign embassies or governments that issued the warnings have contacted local police so far.

“The embassies issued the warnings as they received information from their own sources,” he said. “I have nothing to comment on that. We are only focusing on our regular work.”

He added that police were implementing the security plan laid out by policymakers, and not tightening security measures because of reports circulating on the internet.

Police were deployed in Naypyidaw on Thursday to patrol markets and other crowded areas because of the warnings and news of possible bombings, a police officer on duty in the capital told the online journal The Irrawaddy.

Another police official in Mandalay told the publication that bomb squads were conducting random security checks in crowded public places to search for any unusual items, and preparing to increase security.

Myanmar military spokesman Major General Zaw Min Tun told RFA in an earlier report that authorities were working on tightening the security in Naypyidaw, and that the leak of classified information would create problems.

The ethnic armies said the leaked letter would damage trust-building between the parties involved in the country’s peace process to end decades of internal conflict.

One analyst said he was concerned about shortcomings in Myanmar internal security operations.

Thein Tun Oo, director of the Thayninga Institute for Strategic Studies, a think tank formed by military veterans, said everybody — not just foreign nationals in Myanmar — should be cautious because the country’s security system is broken.

“We learned about this [letter] only because the classified document went viral on the internet, so we should think about the possibilities of how the enemy can get this kind of information without going online,” he said.

“The authorities concerned should meticulously reevaluate and tighten their security measures,” he advised, adding that the country’s security system has been dangerously breached.

“If we can’t fix it in time, there will be grave consequences,” Thein Tun Oo said. “We are concerned about that.” 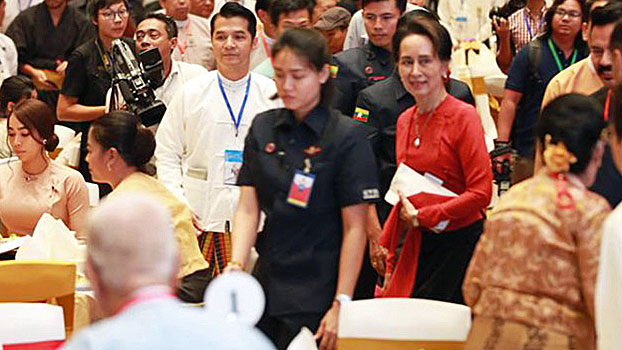 An unknown person aimed a green laser pointer at the state counselor’s face when she attended an opening ceremony for a biographical film about her father and the country’s independence hero, General Aung San, at the Novotel Hotel in Yangon.

After a photo of the green laser on Aung San Suu Kyi’s face went viral on the internet, observers questioned the efficiency of her security personnel, who had failed to notice it.

“I don’t know the details of the incident, but we will certainly reevaluate the programs of our security forces, as this concerns a national leader,” said Police Colonel Myo Thu Soe, spokesman of the Myanmar Police Force.

Chit Win Maung, a Yangon-based journalist and member of the Myanmar Press Council, said authorities should investigate the incident.

“It occurred in a hotel, so there would be CCTV and security details,” he said. “If this is all in place, then the authorities concerned should be able to take action. It is incomprehensible that a national leader has been targeted this way.”

Thein Tun Oo from the Thayninga Institute for Strategic Studies noted that Aung San Suu Kyi’s security guards have not always remained vigilant in the past.

“There has been a lot of criticism about the state counselor’s trips,” he said.

“Her bodyguards do not always stay close to the leader,” he said. “We don’t know how they will be able take care of her or the kinds of security protocols they use. These are minor issues, but it’s obvious that security has been breached.”

“There are weaknesses in the system,” Thein Tin Oo added. “We need to monitor how these weaknesses are going to be fixed.”