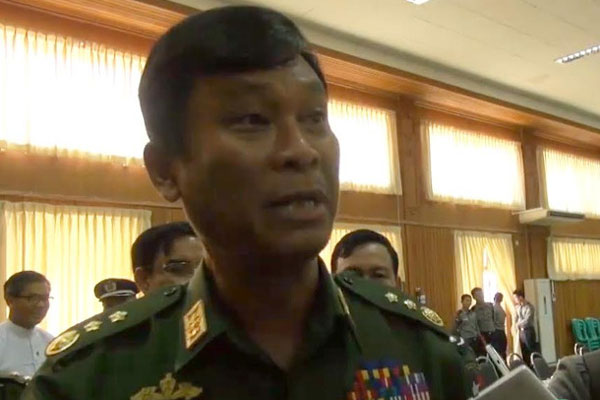 Myanmar’s home affairs minister said on Friday that a “food flotilla” that a Malaysian Muslim organization plans to send to restive northern Rakhine state to help ethnic Rohingya affected by communal violence is “an insult.”

Lieutenant General Kyaw Swe, who served as minister of border affairs under the previous government, made the comment to reporters after a meeting of Myanmar’s central anti-human trafficking organization about the boats laden with 200 metric tons of rice, medical aid, and essential supplies for Rohingya Muslim communities, which are scheduled to depart Malaysia on Jan. 10.

“It is impossible to accept it because it doesn't make any sense,” he said. “It must be done as a government-to-government matter. They can’t go straight to Rakhine state.”

“It shouldn’t be accepted, and we won’t accept it,” he said. “If they want to do it, then they have to do it through the foreign affairs ministry and must inform the central government. We can’t accept it if they just do it with the Rakhine state government.”

Zaw Htay, spokesman of the President’s Office, warned on Wednesday that the organization, which has not yet obtained permission from the Myanmar government to enter the country, can do so when the boats arrive or risk being stopped or attacked by Myanmar security forces, and its crew deported.

The Indonesian government has already sent 10 shipping containers of food, baby food, and clothes for Rohingya affected by the violence in northern Rakhine.

The two predominantly Muslim countries called on Aung San Suu Kyi, Myanmar’s de facto leader, to allow unimpeded humanitarian access to the areas affected by violence when they and other member states of the Association of Southeast Asian Nations (ASEAN) met with her on Dec. 19 to discuss the crisis in northern Rakhine.

Authorities have detained roughly 600 people in connection with the raids during which nine officers were killed and subsequent violence between security forces and armed men in northern Rakhine. Nearly 90 others have been killed in the crackdown.

The State Counselor’s office also said a village administrator from Gwasone village in Maungdaw township had been kidnapped on Dec. 29 by six armed men.

Security forces and authorities are investigating the matter, along with the apparent murders of three other Muslim men who worked in local administrative capacities in their communities.

The men, who all were found dead in the past week, are said to have collaborated with government authorities as they continue to try to round up those who raided the border guard stations.

The security lockdown and search for suspects has forced about 50,000 Rohingya to flee to neighboring Bangladesh, according to the Myanmar government, where some have accused troops of arson, rape, and murder.

On Dec. 30, the Myanmar government said it would take back 2,415 of its citizens living in Bangladesh—a small number of the 300,000 people who Bangladesh says are Myanmar citizens who have taken refuge there and should return home, Reuters reported.

“There are only 2,415 Myanmar citizens, according to our data,” Kyaw Zaya, director general of the foreign affairs ministry told Reuters. 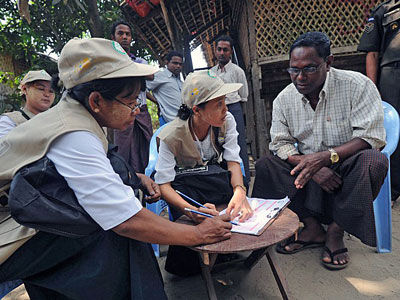 The crisis prompted 23 Nobel laureates, politicians, philanthropists, and activists on Thursday to urge the United Nations to intervene in the situation.

They wrote an open letter to the U.N. Security Council asking it to add the crisis to its agenda as an urgent matter, calling it “a human tragedy amounting to ethnic cleansing and crimes against humanity” and requested that the secretary-general visit the country in the new few weeks.

The signatories also blasted Aung San Suu Kyi, the country’s de facto leader and a Nobel Peace Prize winner herself, for not doing enough to protect the Rohingya, who are denied citizenship and rights to basic services such as education and health care in Buddhist-majority Myanmar.

“If we fail to take action, people may starve to death if they are not killed with bullets, and we may end up being the passive observers of crimes against humanity which will lead us once again to wring our hands belatedly and say ‘never again’ all over again,” the letter said.

In a related development, a Rakhine volunteer group in the town of Thandwe started monitoring the citizenship process for Muslims on Dec. 24, the group’s leader Myint Moe told RFA’s Myanmar Service.

The group has informed the General Administration Department of the Police and Immigration Office and will meet with immigration officers from the capital Naypyidaw, he said.

White card holders must show proof of a long family history in Rakhine state if they want to obtain Myanmar citizenship and have a national identification card.

Under the previous government, the holders were supposed to surrender their cards by May 31, 2015, and receive green cards from the immigration ministry so they could apply for citizenship, but not everyone turned them in.

Those who possess green cards can apply for full Myanmar citizenship, but must first undergo a citizenship verification process.

“We have 474 ethnic Kaman people [who practice Islam], so it is OK to issue ID cards to them,” Myint Moe said.

But the 8,000 others who are applying for ID cards include Rohingya trying to pass themselves off as ethnic Kaman, he said.

“We don’t want these people to get IDs,” he said. “We will be watching. Local people know who the real Kaman are and who is not.”