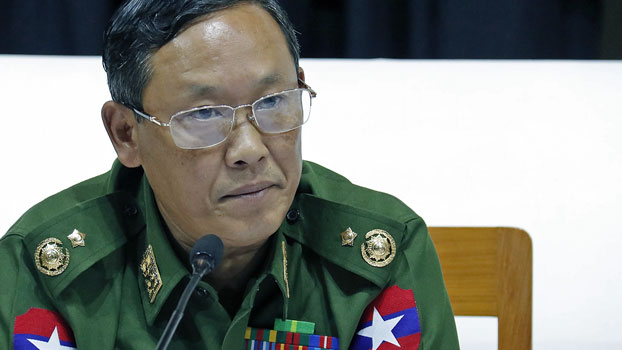 The Myanmar military on Friday accused an ethnic armed group operating in Myanmar’s northeastern Shan state of terrorism and drug trafficking, and issued a strong warning that it is ready to engage in full-blown armed conflict a week after the rebel force and two other ethnic armies conducted coordinated attacks on roads, bridges, and military and police buildings.

The Aug. 15 attacks by the Ta’ang National Liberation Army (TNLA), an ethnic Palaung group, and two other ethnic armies — the Arakan Army (AA), and the Myanmar National Democratic Alliance Army (MNDAA) — left 15 people dead, including nine soldiers, and more than a dozen other people injured.

In the days following the violence, the alliance of ethnic armies has carried out additional armed assaults and clashes with Myanmar forces, leaving a few more people dead and forcing thousands of residents to temporarily flee their homes.

Late last year, the Myanmar military declared a temporary unilateral cease-fire in five of its regional commands in a bid to boost the prospects of ending hostilities with ethnic armies, though the suspension has not held up in Shan state. The cease-fire expires on Aug. 31.

“Most of the attacks on Aug. 15 were not in military-related places,” said Myanmar military spokesman Major General Tun Tun Nyi at a press conference in Naypyidaw.

“These are not only terrorism acts, but also [acts] that tarnish the country’s and government’s images,” he said. “They were more than terrorist attacks. They were an act of brutality and could be described as a war crime.”

He admonished the TNLA for allegedly setting fire to a soldier and a civilian who were on duty at a police checkpoint for illegal drugs in Shan’s Nawngkhio township, calling it a brutal and inhumane act.

His comments prompted a swift denial by TNLA spokesman Major Mai Aik Kyaw, who said the attacks were in response to Myanmar Army offensives.

“We attacked on Aug. 15 because of the army’s offensives on us,” he told RFA’s Myanmar Service. “If they hadn’t carried out these attacks, we’d have no reason to attack them back.”

“We didn’t set fire to anybody,” he added. “Yes, we had a brief fight at the drugs checkpoint, and a car caught on fire during the fighting. Some people who already had been shot were in the car and caught on fire from the flames. We didn’t deliberately set them on fire.”

The three armed groups that staged the Aug. 15 attacks are fighting for greater autonomy, territory, and access to resources in their respective areas.

At times, they also have been involved in illegal drug trafficking in northern Shan state, though the TNLA says it has an avowedly anti-drug policy.

Nevertheless, another Myanmar military spokesman accused the Ta’ang force of drug trafficking on a mass scale.

“We have seized more than a billion kyats [U.S. $629,000] worth of drugs in the ethnic armed groups’ control areas,” said Major General Soe Naing Oo, chairman of the military’s True News Information Team.

“Working on anti-drug operations is our duty, and we will keep working on it,” he said.

But Mai Aik Kyaw denied this accusation as well.

“No, the TNLA doesn’t do any drug business,” he said. “Drug dealers sometimes pass through our controlled area though, but it is not related to us.”

The Myanmar military, meanwhile, said it still wants to hold peace talks with Myanmar's ethnic armed organizations at a location in Shan state, though it was not immediately clear whether the TNLA, AA, and MNDAA would participate.

“If the TNLA comes to the peace talks, then the military welcomes it,” Soe Naing Oo said. “If the TNLA wants to continue fighting against us, we are ready.”

“If the military launches its offensive, we are ready to fight them back,” he said.

Mai Ohn Kyaw, a lawmaker from the Ta’ang National Party, warned that both sides must come to the negotiating table to discuss ending one of Myanmar’s long-standing civil wars.

“If both sides keep on accusing one another, the war will never end,” he told RFA. “The best way is to talk. If we want peace, we have to talk. We will never have peace if we keep fighting each other like this.”

Civilian shot in the back

Also on Friday, Myanmar forces deployed aircraft during intense fighting with the AA in a village in war-torn Rakhine state’s Minbya township amid ongoing armed conflict in the western region that has left more than 100 civilians dead and more than 80 wounded, and displaced tens of thousands of others during the last eight months.

Local witnesses said hostilities in Panmyaung village began on Thursday morning and that two Myanmar fighter jets launched air attacks after the battle intensified near Shwekyin, an area downstream along the Laymyo River.

“Around 11:55 a.m., two helicopters flew over the village and fired their guns toward the mountain,” said a Kyaung Taung resident who declined to be named out of fear for his safety.

“The shells from their guns fell onto houses in the village,” he said. “They also fell onto the monastery. All the people who were in the monastery for a religious observance ran into the village, and the villagers witnessed the attacks as the [helicopters] flew overhead.”

AA spokesman Khine Thukha said three AA soldiers were killed and others were injured during fighting on Thursday, and that more than 40 Myanmar soldiers died.

He said he did not have information about Friday’s battle.

“There were a few injuries on our side,” he said. “I don’t know the exact numbers.”

“The AA must have suffered casualties too because the clashes were not minor,” he added. “I don’t know the details of their causalities.”

RFA could not independently confirm information about the battles in Minbya township.

Also on Friday, Myanmar soldiers fired shots into a village after a military column was hit by a mine blast near Tun Rawae Bridge in Rathedaung township, hitting a 20-year-old woman in the back as she ran away with other villagers, a local monk said.

Volunteers helping Khin Win Shwe said they were preparing to take her to Yangon for medical care because she was in critical condition, he said.

“I heard a blast like a bomb explosion around 7 a.m.,” he said. “Afterwards, the military column fired with small weapons into the village. People ran in a panic, and a woman was hit. All the people from the village saw them shooting into the village.”

Taza Bala said the shots were fired by as soldiers as they conducted clearance operations following a mine explosion.

Win Zaw Oo told RFA he had no information about the shooting or the mine attack.

The AA claimed responsibility for the blast, though it said it did not know the number of dead and wounded from the Myanmar Army column.