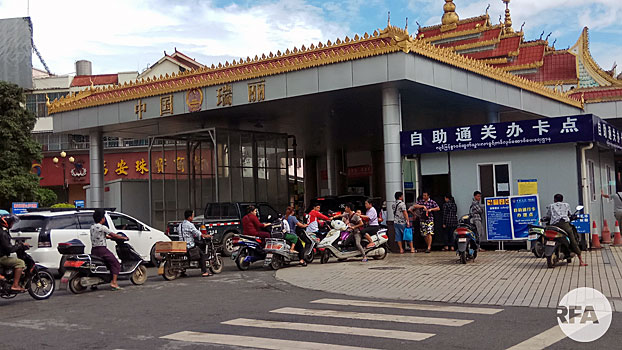 Vehicles and motorbikes line up in Myanmar to pass through a border crossing to China in an undated photo.
RFA

The closure of a border crossing to China by the Myanmar Army in northern Shan state has stranded more than 1,000 trucks transporting fruit, causing heavy financial losses for Myanmar farmers and businesspeople who make their livings exporting produce and seafood to Chinese consumers, the head of a retail association said Thursday.

Soldiers shut down the Kyin San Kyawt border checkpoint north of Muse township, creating a backup of hundreds of fruit trucks last week, but did not give a reason for the action, Sai Myint Bo, chairman of the Muse Fruit Retailers Association told RFA’s Myanmar Service.

“Myanmar farmers and fruit dealers have lost huge amounts of money because of this problem,” Sai Myint Bo said.

“Every truck has lost three tons of fruit each, and there are more than 1,000 trucks blocked there,” he said.

“They can’t go anywhere [because] this crossing is only for export goods, such as fruit and seafood into China,” he said. “No Chinese goods come into Myanmar through this border crossing, so, only Myanmar side is losing out.”

The Kyin San Kyawt area, which is also an entrance to the Chinese town of Wanding in Yunnan province’s Riuli city, is about 10 miles from Muse and three miles from the 105-mile trade zone in northern Shan state.

Trucks from Myanmar transport fruit and other commodities into China through the border crossing, which are then sold in the market in Wanding.

Some fruit dealers say that about 1,500 trucks carrying watermelons from Myanmar have been blocked from crossing the border because of delays by Chinese authorities responsible for inspecting the contents of the vehicles due to a lack of manpower, he said.

Chinese fruit dealers have been entering Myanmar through the Muse border crossing gate to appraise the fruit, and the trucks can only enter Wanding after the appraisals, Sai Myint Bo said.

Because fruit businessmen are facing difficulties, they want the Myanmar government to discuss this problem with Chinese authorities, he said.

More than 400 trucks heading to China pass through Muse every day, but customs officials at the Kyin San Kyawt border checkpoint allow only about 300 of them to drive into China daily, he said.

That’s why thousands of trucks have been stranded in this area of Myanmar for a week, Sai Myint Bo said.

“We want convenience on the way [to delivering the fruit] and some guarantee on the trade,” he told RFA.

“It would be better if the Chinese dealers who appraised our fruit paid for it in Muse and then transported it into China themselves,” he said. “We are now worried that our trucks won't be allowed to enter China.”

RFA was unable to reach officials at Myanmar’s Ministry of Commerce for comment.