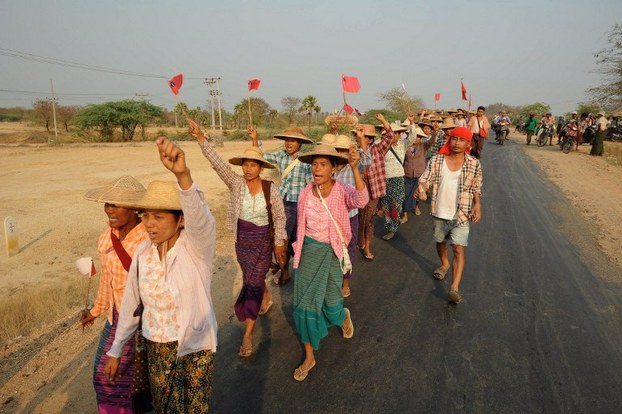 Protesters march near the Letpadaung copper mine in Salingyi township, Sagaing on March 13, 2013.

Villagers who live in a copper mining area of northwestern Myanmar’s Sagaing region said Monday that previous recommendations by a parliamentary commission about a Chinese-backed mine project have yet to be implemented, and that the company running the operation has failed to pay them fair compensation for land they forfeited for the project.

In a report issued in March 2013, a commission chaired by current Myanmar leader Aung San Suu Kyi issued nearly 100 recommendations, among the most important of which were an acknowledgement that the Letpadaung mine in Salingyi township had affected the environment and that farmers had been forcibly evicted from their land to make way for the project.

The body advised the Chinese company to compensate farmers, but concluded that it could continue its mining activities in Letpadaung.

Farmers who had to give up land for the project have long complained and protested that the company and the regional government have failed to implement the commission’s measures.

“We haven’t seen any implementation of the recommendations so far,” said Ko Myo, an activist helping local farmers. “The [company] has monthly meetings, but they never inform us about meeting discussions.”

“When we ask them about it, they say they are working on it,” he said. “So far, there has been no progress and no transparency.”

The most recent agitation among villagers for fair compensation comes in the run-up to a state visit by Chinese President Xi Jinping, who will be in Myanmar on Jan. 17-18 to push for a speedier build-out of Chinese development projects under his massive Belt and Road Initiative (BRI), according to analysts.

She added that the provisions of a law pertaining to land confiscations that took effect in 2012 should apply to the land that the villagers had to give up.

“We suggested that, and they gave us responses as if it was not relevant,” Yee Win said.

Farmer San Nwe from Taw Kyaung village said Myanmar Wanbao Copper Mining has not complied with relevant laws since it began the project, let alone any of the parliamentary commission’s recommendations.

“It hasn’t implemented any suggestions or recommendations from the commission,” she told RFA.

“It needs to create 1,900 acres of land near the villages as a replacement for the confiscated land,” she said. “It is supposed to give up the extra land it has confiscated. It is supposed to create job opportunities for the locals. Now, there is nothing. The local villagers are having more problems than benefits.”

The parliamentary commission found that Myanmar Wanbao Copper Mining confiscated more than 7,800 acres of land, which it said was more than enough for the mining project. It also suggested that farmers who gave up land should be compensated in part with 1,900 acres of vacant land from nearby villages.

Some farmers in the Letpadaung area say they have not accepted compensation for their confiscated farmland, and they and many others have held protests over the years to try to get the company to give them the replacement land.

The farmers said they are not satisfied with new plots of land given to them by the Sagaing regional government because they are infertile and are located far from their villages.

“They are making unnecessary demands,” said Myint Kyi, Sagaing’s municipal affairs minister. “For example, they want the 19,000 acres of replacement land to be near their villages, but this is only possible if there is vacant land near the villages. They don’t like the replacement land we created for them.”

RFA could not reach Myint Kyi, who is in charge of the UMEHL but no relation to Sagaing’s municipal affairs minister, or Myanmar Wanbao Copper Mining for comment.

This is a really old piece of news. I'd like to hear and learn the newest development around the villages. Please provide something new.