Interview: ‘People Have Lost Faith in The Democratic Transition’ 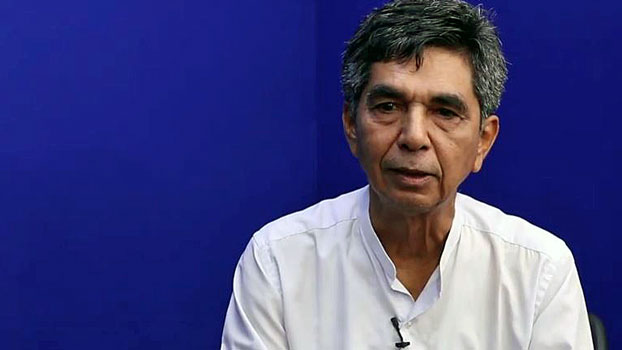 Oo Hla Sein, a leader of the Arakan Nation Party and lawmaker in Myanmar's lower house of parliament, discusses the situation in western Myanmar's Rakhine state during an interview in Yangon, March 24, 2019.
RFA video screenshot

The Arakan National Party (ANP) received a blow last week when its leader, Aye Maung, was sentenced to 20 years in prison for high treason to be served concurrently with an additional two-year term for defamation of the state for a speech he made in January 2018 in Myanmar’s volatile Rakhine state. During the speech he is said to have accused the ethnic Bamar-dominated ruling National League for Democracy (NLD) government of treating the ethnic Rakhine people like “slaves.”

A year later, the Arakan Army (AA), a Buddhist Rakhine military fighting for autonomy in the state, was branded a terrorist organization by the Myanmar government after it killed 13 officers during raids on police outposts. Arakan fighters killed nine other officers in a similar attack in early March. The clashes which flared up late last year have claimed the lives of 24 civilians and 22 policemen and displaced thousands of residents. A day after Aye Maung was sentenced, the ANP formed a commission to investigate the civilian deaths and determine which side is responsible for recent shelling that damaged heritage sites in the ancient town of Mrauk-U.

One member of the commission is Oo Hla Saw, an ethnic Rakhine lawmaker who represents Mrauk-U in Myanmar’s lower house of parliament. He is also a leader of the ANP, the dominant ethnic political party in the western state. The ANP receives its greatest support from Rakhine Buddhists, the largest ethnic group in the impoverished and religiously and ethnically divided state. The Burma Task Force, a coalition of American and Canadian Muslim organizations, has said that the ANP is “extremely xenophobic and has a specifically anti-Rohingya and Islamophobic platform” when it comes to Rohingya Muslims who live in Rakhine state. More than 740,000 Rohingya Muslims, viewed by Myanmar as illegal immigrants from Bangladesh, fled Rakhine during a vicious military crackdown in 2017.

In an exclusive interview with reporter Kyaw Min Htun of RFA’s Myanmar Service, Oo Hla Saw discusses the work of the investigative commission, the jailing of Aye Maung, and what needs to be done to resolve Rakhine's state’s complicated issues.

RFA: Can you tell me about the investigation committee formed by ANP?

Oo Hla Saw: We know the ongoing armed conflicts will not be over anytime soon. There haven’t been any armed conflicts in Rakhine state for a long time. As far as I remember, there was one called the General Offensives in 1980. Apart from that, there has not been any heavy fighting in the past 40 years. There had been intense fighting in northern Shan, Kachin, and Karen states, but not us. We thought these conflicts would not diminish, [and] just as we thought, they are getting bigger. As for the people, some are frightened, while others are very motivated about them. There is growing misery among the people. The worst thing is when the conflict spread to archeological sites. A party's statement is not enough. It needs more than that. We are going to investigate all these issues independently to produce an impartial research paper. It will become a part of the historical record. We will distribute it among the public and to the media. We will also submit it to the leaders of the country.

RFA: Aye Maung, the former ANP leader who is still technically a leader of the party, has received a lengthy prison sentence. There has been widespread criticism of the authorities' decision to give such a sentence to a prominent Rakhine leader. As a Rakhine party leader yourself and as a colleague of Aye Maung, what is your opinion of the prison sentence?

Oo Hla Saw: To put it bluntly, I absolutely denounce that prison sentence. It should not be, especially as it comes from a government that assured it would have a policy of having no more political prisoners in this democratic society. It is unlawful to charge and imprison a democratically elected leader. In a democratic society, everyone is entitled to share his opinions freely. Freedom of expression is the fundamental principle of democracy. [Aye Maung’s] speech was framed as incitement, and he was charged with high treason. The truth is he didn’t have an army or possess any weapons — not even a needle — to commit high treason. Besides, he was prosecuted with three charges for a single incident. Our lawyers pointed out that that is not in line with the law. But he was still convicted. It is a very harsh decision. To put it more bluntly, it is undemocratically impertinent and authoritarian.

Like I said, people in Rakhine state have different feelings about the AA’s emergence. Some are frightened, but others — especially young people — are very motivated to join them. It’s a reflection that the young people of Rakhine are not satisfied with the current democratic transition. They view it as something that has nothing in it for them since our whole Rakhine state is still in poverty. They see the central government has no efficient control over the state government to bring prosperity and opportunities to the state. With the armed conflict spreading to Mrauk-U, more and more people sympathizing with the AA, and [the court] giving a very harsh sentence to a Rakhine party leader, it is like the [central government] keeps creating misery for the Rakhine people. It has led people to radicalization.

Oo Hla Saw: The leadership of the Rakhine state cabinet doesn’t know what is happening on the ground. Especially on the Muslim issue, they should be consulting with the Rakhines. The Rakhine people have different attitudes toward Muslims. Some are frightened. Some are friendly. Some view them in a balanced and fair manner, but others are extreme. They should have engaged with all the people, but they didn’t. They don’t know what is happening in townships like Buthidaung and Maungdaw. They only followed the leaders from Naypyidaw when they visited. Everything they said is incorrect. Besides, they didn’t do anything to improve the unemployment issue and bring opportunities to the locals. There is also rampant corruption, especially in awarding tenders to businessmen. They didn’t take any action [on this], though they know it well. All in all, people from Rakhine state haven’t seen any signs of improvement during the five-year term of this government. I have visited all 14 capital cities of [Myanmar’s] states and regions. Rakhine state's capital Sittwe is the most dilapidated and hopeless of all of them. The management is very incompetent, so people have lost faith in the democratic transition.

As we all know, the Muslim issue is still a very pressing one in Rakhine state. Then there is the conflict concerning the AA. On top of that, China is very aggressive in promoting its investments. We Rakhine party leaders have met the Chinese ambassador. I found him very aggressive. He was dictatorial and told us only what he wants.

RFA: What must be done to resolve Rakhine state’s complicated issues?

Oo Hla Saw: There are such delicate and complicated issues in Rakhine state. The Union government is not working efficiently. I don’t think the current NLD-appointed Rakhine state government has the capacity to resolve these issues either. I would like to suggest letting [the ANP] get involved and working together. We would like to work with the NLD government. We have plenty of ideas and contributions to make. We have talked about that with the NLD leadership, [and] Aung San Su Kyi has said, “I will take care of it.” That’s it. It shut us out. In reality, she can’t manage. There are several pressing issues going on in the whole country. The masterminding of The Lady alone is not enough, but now they won’t let us get involved. Now relations between the NLD and the ethnic parties, relations between the NLD and the military, and civilian-military relationships in parliament are all getting worse. How can national reconciliation be possible under those conditions? Will reducing the tensions and reconciliation ever be possible?