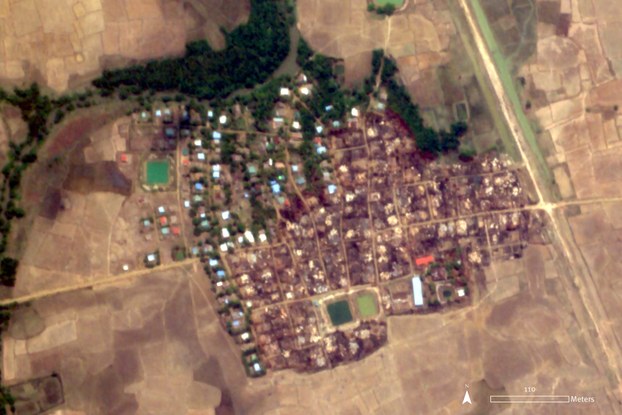 A satellite image shows about 200 homes and other buildings destroyed by fire in Letka village, Mrauk-U township, in western Myanmar's Rakhine state, May 16, 2020.

Satellite imagery of a town in Myanmar’s restive Rakhine state proves that almost 200 homes and other structures were destroyed by fire on May 16, Human Rights Watch said Tuesday.

In a statement, the New York-based NGO called for an impartial investigation into what it called a “mass destruction of residential property” in Letka village, a mostly ethnic Rakhine community in Mrauk-U township.

Fighting in the area flared up again in January 2019 between Myanmar’s military, called the Tatmadaw, and the Arakan Army (AA), an insurgent group of ethnic Rakhine rebels. According to HRW, the satellite images show similarities to soldiers' arson attacks on Rohingya villages in Rakhine dating back as far as 2012.

RFA reported the incident last week, interviewing a villager who declined to be named, citing security concerns, who said that 194 of the village’s 301 homes and a middle school were set alight by government soldiers. The military denied purposefully torching the buildings and blamed the AA, while AA spokesman Khine Thukha said he would enlist the help of international organizations to investigate.

“The burning of Letka village has all the hallmarks of Myanmar military arson on Rohingya villages in recent years,” said Phil Robertson, HRW’s deputy Asia director.

“A credible and impartial investigation is urgently needed to find out what happened, punish those responsible, and provide compensation to villagers harmed,” he said.

The satellite record shows that at 10:30 a.m. on May 16, Letka village was free of significant damage. But as of 2:12 p.m., fires raged in buildings there. HRW said that its estimate of 200 buildings engulfed in flames might be an underestimate because the internal damage to buildings is not visible in the imagery.

Witnesses in neighboring Bu Ywat Ma Nyo village, about one kilometer away from Letka, told local media that they saw soldiers of the Tatmadaw go past their village toward Letka at about 2 p.m. on May 16, leaving at about 5 p.m, which corresponds to the imagery.

The neighboring villagers said they heard gunfire and observed flames and smoke along with two drones, one in Let Kar and the other in Bu Ywat Ma Nyo.

HRW interviewed an aid worker from Mrauk-U, who said that after 2 p.m. on May 16, it appeared that there was smoke originating from Letka.

“There was no one living there after the fighting last year as [the residents] had fled, but the older people really have nowhere to go now,” he said.

“They had been sheltering in IDP [internally displaced persons] camps in Tein Myo and Bu Ywat Ma Nyo villages and had at least been able to go home and collect their belongings or check their homes from time to time. Now they don’t have anything. It’s very sad.”

According to HRW, most of Let Kar’s residents residents left the village more than a year ago, when hostilities increased.

“On April 10, 2019, the military raided Letka and detained 27 men for questioning about alleged ties to the Arakan Army. By April 22, three of the men had died in custody, attributed to “heart failure” by the military-owned Myawaddy newspaper,” the HRW statement said.

“No autopsies were performed because the security forces swiftly cremated the bodies. The authorities contested allegations that the men were tortured but refused to investigate the deaths. The 24 others, two of whom are minors, remain detained in Sittwe,” it added.

According to a local source, a former resident of Letka entered the village the next day after the attack to inspect the damage, telling the source that at least 194 buildings had been burnt down, including a school and the resident’s former home. The resident and several others went to Letka by motorbike, passing 50 Myanmar soldiers without being stopped.

Tun Thar Sein, a member of parliament from Rakhine State, confirmed to HRW that Myanmar troops were in the area and that he and others would urge the government to provide aid and compensation to the residents.

Also on May 17, the government military released a statement saying that troops entered the village while on patrol on May 16 after being attacked by the AA. Myanmar’s army also released an aerial image of the burning buildings, most likely taken by one of the drones.

According to the Myanmar military, the fires were started by the AA, who fled into the mountains after damaging more than 20 houses.

The AA on May 19 denied the accusation in a statement, with spokesperson Khine Thuka asking the media to investigate.

“The Myanmar Army is not only accusing unilaterally the Arakan Army of committing the crimes that they have committed but also reporting fabricated news about Letka's case on the media belonging to Myanmar Army and their sponsored media. This is just an act of trying to blame the other organization for their crimes,” the AA's statement said.

HRW in the statement accused the Myanmar military of war crimes, saying that under the laws of war, attacks on “civilians and civilian objects, such as homes, are prohibited.”

The NGO said Myanmar has a responsibility to investigate the alleged crimes and hold its soldiers accountable, in addition to providing compensation and condolence payments to victims.

“Myanmar’s government should not leave the investigation of this incident to the military, which has repeatedly covered up atrocities and exonerated its troops,” Robertson said.

“To ensure a credible investigation, the government should request UN assistance,” he added.

RFA attempted to contact a spokesman for the military for comment but he could not be reached.

RFA also contacted Zaw Htay, spokesman for the President's Office, but he declined to answer questions about the matter.

Meanwhile, RFA has learned that in another part of Rakhine, in the rural town of Ann, a 51-year old villager was shot and killed by the government soldiers in early May.

Sources say that Aung Thein and three other villagers from the same town were pushing a bamboo raft to the next closest town of Kan Htaung Kyi, when they were unexpectedly fired upon by soldiers stationed at a bridge.

“The three men, including [my husband] were shot as they approached Kazugaing bridge,” Aung Thein’s wife, who declined to be named, told RFA’s Myanmar Service.

“They say the shooters were government soldiers. We have not yet found the body of [my husband],” she added.

According to Aung Thein’s wife, since the army has closed the road into the area, she has been unable to bring back her husband’s body.

In an unrelated incident, two men from Minbya Township were killed by military troops and their bodies were missing for four months until they were found in a forest, according to a relative of one of the men, who requested anonymity to speak freely.

“There were all kinds of rumors about them,” the relative told RFA.

“Some said they had been detained in an army camp. But at last, their bones and clothes were found on the hill of Shew Kyet Yet pagoda. They were buried in a hole [in the hill],” the relative said.

The relative said when the bodies were discovered, it was impossible to tell which victim was which, so their families had to guess based on the clothes they were wearing.

“Wood cutters found the pieces of bones and told us to come check,” the wife of one of the victims, who requested anonymity for legal reasons, told RFA.

“They were buried together in a hole. When they disappeared we notified the police and human rights groups, but there wasn’t any news about them,” she said.

“People are unlawfully arrested and accused of being part of the AA,” said Myat Tun of the Rakhine Human Rights Protection Group.

“On the other hand, the AA also arrests people and accuses them of being informers for the army. Both sides accuse each other whenever villagers are killed or they disappear,” he said.

According to statistics compiled by RFA, there have been 149 civilian deaths and 350 wounded in fighting between the Myanmar military and AA since the beginning of 2020.