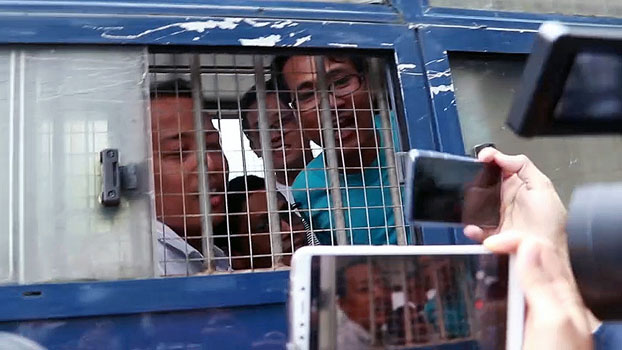 Eight ethnic Rakhine men, including several deported by Singapore in July, were formally charged Friday in Yangon under Myanmar’s Counter-Terrorism Law for allegedly providing financial support to the rebel Arakan Army in its fight against Myanmar forces in war-ravaged Rakhine state, a court official and a defense attorney said.

Singaporean authorities deported six of the men in June after they said they were apprehended for allegedly using the country as a platform to build support for armed violence against the Myanmar government through their organization, the Arakanese Association-Singapore (AAS).

Myanmar authorities took them into custody upon their arrival home.

Among the suspects remanded at Western Yangon District Court were Aung Myat Kyaw, the younger brother of Arakan Army (AA) commander-in-chief Major General Tun Myat Naing, who was deported from Singapore along with five others.

Two others — Than Htun Naing and Soe Myint — have been charged as accessories and declared fugitives for evading capture, said Min Thant, the court's information officer.

They have also been charged under the Counter-Terrorism Law and the Penal Code, he said.

“We are now taking action on the charges, as they are fugitives,” he said. “We will issue warrants for their arrest.”

Another suspect, Aung Myo Win, was remanded to be charged separately on terrorism-related offenses.

Kyaw Myo Htun, an attorney representing six of the defendants, said the men were not raising funds for the AA in Singapore.

“They have been collecting money for donations for the victims of the recent flooding in Rakhine state,” he said. “They were doing it in Singapore.”

Rakhine state has been one of several regions across Myanmar that has been badly affected by flooding and landslides caused by annual monsoonal rains beginning in June.

RFA’s Myanmar Service could not reach the AA for comment on the case.

The eight individuals were allowed to meet with their family members for the first time during the court hearing.

The mother of defendant Hein Zaw, chairman of the AAS, said her son is in good health.

The defendants' next hearing is scheduled for Aug. 23.

The AAS is believed to be raising funds for the AA, which is fighting for greater autonomy in Rakhine state, and to be providing relief aid and money for social activities to ethnic Rakhines displaced by war in the northern part of the state.