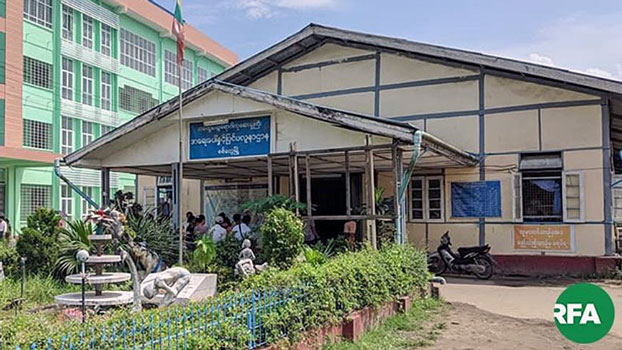 A view of the intensive care unit at Sittwe General Hospital in Sittwe, western Myanmar's Rakhine state, in an undated photo.
RFA

The Myanmar military has filed a criminal defamation lawsuit against an upper house parliamentarian and Reuters news agency over the coverage of a shooting in Buthidaung township in western Myanmar’s war-ravaged Rakhine state, according to police.

One of the two Rohingya women was pregnant. Seven other villagers were wounded in the shelling.

The military publicly complained about the story at a Feb. 4 press conference after which Reuters updated the story adding the army’s position.

The lawsuit has been filed under Section 66(d) of the 2013 Telecommunications Law, which prohibits the use of the telecom network to defame people and carries a maximum two-year prison sentence.

“MP Maung Kyaw Zan and Reuters News were named in the lawsuit filed under Section 66(d) of the Telecommunications Law,” said Kyaw Thu, the officer in charge of Buthidaung Police Station. “If you want to know the details, please send local reporters to us.”

Maung Kyaw Zan told RFA’s Myanmar Service that the police station’s records do not indicate whether the case against Reuters has been filed, and that police are preparing to send a letter to the speaker of Myanmar’s national parliament whose permission they need to proceed with the case against the lawmaker.

Maung Kyaw Zan also said he disagrees with the legal action taken against him by the military.

“Two Bengali women died, and seven others were sent to the hospital in Buthidaung township because they were hit by a shell in a village on Jan 25,” he said, using a derogatory term for the Rohingya, who are viewed by the Myanmar government as illegal immigrants.

“I did an interview with Reuters about it, and now there’s been a lawsuit filed against me over that interview,” he said.

A Myanmar military spokesman declined to comment on the lawsuit.

“We have nothing to say about it. It will proceed according to the law,” said Major General Tun Tun Nyi, vice chairman of the military’s True News Information Team. “We are not sure whether the Reuters case has been filed. We know for sure that the case against Maung Kyaw Zan has been filed.”

Another military spokesman, Brigadier General Zaw Min Tun, told RFA on Feb 7 that the army filed the lawsuit against Maung Kyaw Zan because of an online post saying that civilians were killed by heavy shelling by government troops.

“Actually, it was not a military shell,” he said, blaming the deaths and injuries on shelling by the Arakan Army (AA), an ethnic Rakhine armed organization that is battling Myanmar forces for greater autonomy in Rakhine state.

A Reuters report on Monday quoted a spokesperson for the news agency as saying, “Reuters stands by the reporting that is of concern to the military and is the subject of an ongoing discussion with Myanmar’s Press Council.”

“We do not believe there is any basis for a criminal action against Reuters or our journalists under Myanmar law. We have not seen any criminal complaint against Reuters, and so cannot comment further at this time,” the spokesperson said.

In May 2019, two Reuters journalists who were jailed for more than 16 months on charges of obtaining state secrets were released in a presidential amnesty. They were freed shortly after winning a Pulitzer Prize for their reporting on the murder of a group of Rohingya by Myanmar soldiers in a Rakhine village.

More than a year of fighting between government soldiers and the AA is continuing to disrupt the lives of other civilians in Rakhine state.

A state education department employee was seriously injured Sunday after being shot at a military checkpoint in Rakhine’s capital Sittwe when he failed to obey an order to stop for an interrogation, according to an army announcement.

The employee, Nyi Nyi Zaw, who was returning to the city from Ponnagyun township, was first taken by police to a military hospital, then transferred to Sittwe General Hospital where he received stitches for a belly wound, his brother, Than Zaw, told RFA Monday.

“There was no operation,” he said. “He is conscious.”

Police have confiscated Nyi Nyi Zaw’s mobile phone and motorbike, he added, saying that his family is concerned that the army will use them to fabricate a story that his brother was involved in illegal activities.

Nyi Htwe, an Education Department officer in Ponnagyun township, said Nyi Nyi Zaw is the office watchman and that he was returning home after work when he was shot.

Several vehicles were lined up at the security checkpoint, but Nyi Nyi Zaw drove around them, he said.

“The guard asked him to stop, but he didn’t hear the order and was shot,” Nyi Htwe said. 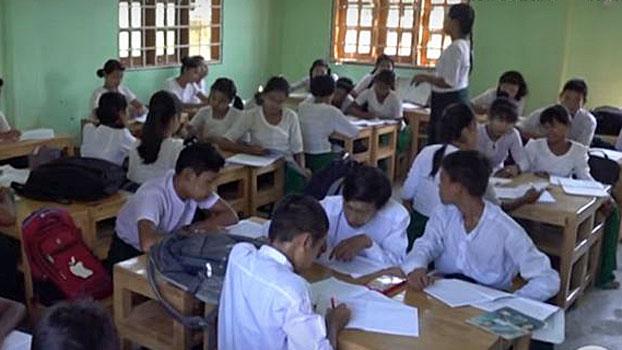 The Rakhine state government, meanwhile, said fighting between Myanmar forces and the AA is preventing it from administering matriculation exams to more than 6,000 students in conflict zones.

With nearly two dozen test centers closed due to the hostilities, education officials and students say they fear for their safety and are concerned that they will need to travel long distances to other cities for the exams.

“My parents are in an IDP [internally displaced persons] camp, where I cannot study well because I hear gunfire all the time,” said Khin Thidar Tun, a student from Rakhine’s Rathedaung township. “I cannot focus on my studies, but I try my best.”

Aung Htay from the Rakhine National Unity Committee which is helping the IDPs in Rakhine state, said parents, too, are concerned about the safety of their children when they travel to other towns to sit for exams.

Some social organizations in Mrauk-U township made arrangements for 370 students from IDP camps to travel to nearby towns for the exams, scheduled to begin Wednesday.

Rakhine Education Department officer Tin Thein declined to comment on whether the government would provide accommodations for students who must travel to other towns for tests.

Spokesmen from the AA and Myanmar military said their respective forces will not initiate any attacks and will only engage in clashes to defend themselves.

More than 49,000 Myanmar students are scheduled to sit for matriculation exams in over 127 test centers throughout the country.