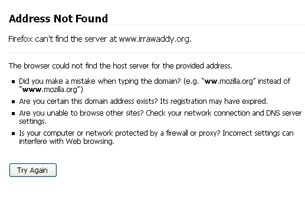 Typing "www.irrawaddy.org" called up this image in the browser on Sep 22, at 8:30 p.m in Rangoon Time.
Photo: RFA

BANGKOK—The editor of a Burmese exile Web site that came under devastating cyber-attack on the anniversary of last year's failed uprising against the Burmese junta said his staff is gathering evidence and believes it will be able to identify the attackers.

“We can find the culprit. We have already obtained some of the IP addresses,” Aung Zaw, editor-in-chief of the Irrawaddy online magazine, said in an interview. “If it was a cyber crime, lawsuits can be filed.”

“We will be able to resolve the matter,” he said.

“Everyone seems to think that this is related to the one-year anniversary of the monks’ movement,” Aung Zaw said. 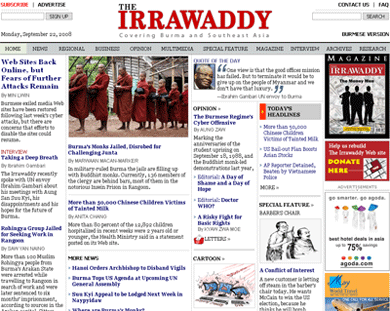 Screenshot of irrawaddy.org after it went back online on Sep 22, 2008 Photo: RFA

“Last year, atrocities committed by the military government, the activities of the democratic movement and the demonstrations by the monks were put on the Internet by bloggers from both inside and outside the country, so some are asking questions whether this action now could be a sort of a revenge for those activities.”

Irrawaddy’s primary Web host, iNet, the largest server in Thailand, “told us that we were under a severe attack, saying that large files, in the size of many gigabytes are getting into our Web sites,” Aung Zaw said.

“They sent in huge files, and these files were not coming from one place but from multiple sources. It could also be from many countries,” he said.

Irrawaddy’s Web site failed and editors moved its content to a mirror site hosted by Singlehop, which also came under heavy attack within minutes, Aung Zaw said. Both Web sites were destroyed, and Irrawaddy is now repairing the original site.

Since early September, he said, Internet speeds in Burma have slowed drastically, Internet cafes have come under increased surveillance, and journalists increasingly have been harassed and in some cases detained.

“It looks as if all of this is being organized by someone from some organization in an operational manner,” he said.

The junta or possibly cyber-attackers hired for U.S. $500-700 per hour are the likely culprits, he said.

Visits from Burma to the RFA Web site from 09.20.07 to 10.20.07 showing the total shut down of Internet access and then a markedly slower access after October 5th. Photo: RFA
Khin Maung Win, DVB deputy director, cited an earlier attack, in July 2008. "The current attack is similar to the one ...in July. ...We said earlier that this kind of attack wouldn't stop with DVB, and it happened as we thought. Now Kyit Pyaing and Irrawaddy are severely affected," he said

At the height of the crackdown on anti-government protests last year, all Internet connections inside Burma were closed for two weeks. The United Nations estimates that 31 people, including a Japanese photojournalist, were killed. Thousands were detained.

In its most recent annual report on press freedom around the world, Reporters Without Borders cited sharply increased censorship since the crackdown.

One year after Burmese monks joined widespread protests against the ruling junta, following is in a chronology of key dates in what became known as Burma’s “Saffron Revolution.”